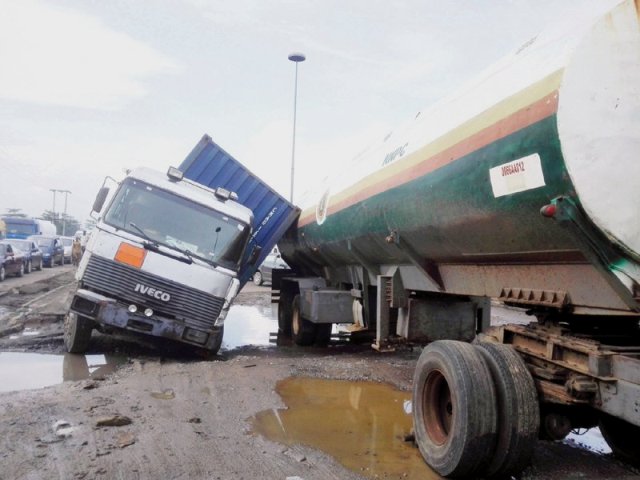 Umar Ajiya, Managing Director of the Petroleum Products Marketing Company (PPMC), a subsidiary of the Nigerian National Petroleum Corporation (NNPC), says bad roads are partly to blame for the persistent fuel scarcity in the country.

Ajiya also said some unscrupulous independent petrol marketers have been sabotaging the system, insisting that there is no reason for the current petrol scarcity being experienced in some cities across the country, especially given all the measures so far put in place by management of the NNPC.

“For the last one week, there is no blessed day that trucks do not fall off the road between Jebba and Mokwa and this is the linkway where these products are brought from the depot, especially from the south to the north, particularly Abuja,” Ajiya said during an interview on Channels Television on Friday.

“We had to mobilise to do palliative repairs and pull off the trucks to ensure that trucks move.

“On top of that, the channel from which we transport these products from the ships offshore Lagos to Warri was blocked by another vessel.

“We equally have to mobilise together with the owner of the vessel to try to remove that ship. That channel has not been dredged for a long time.

“These are consequences of inherited state of infrastructure we are living with. The administration also inherited an empty treasury. So, we couldn’t overnight repair all these roads.”

On some sharp practices by some petrol marketers, Ajiya said the amount of fuel that the NNPC imports on a daily basis is more than enough to serve the entire country.

“There is no blessed day that we don’t bring one cargo of PMS into this country and one cargo on average is fifty million litres,” he said.

“And if we say we are consuming less than 35 million litres per day, then it is a natural question, where is the excess going?

“We have the belief and reports indicate that most of these excess are either hoarded or smuggled out of the country by the marketers.”

Ajiya, however, denied that the NNPC has been subsidizing petrol even after Nigerians were told that fuel subsidy had been ended.

Ibe Kachikwu, Minister of State for Petroleum Resources, had said that the NNPC loses billions of naira every month by selling fuel at N145 per litre.

According to Kachikwu, the landing cost of petrol at present is about N171 naira per liter, as a result of the slight increase in crude oil price in the international market.

Although Ajiya agreed that NNPC pays the N26 difference in the land landing cost and the approved selling price, he insisted it was not subsidy.

“There is a difference between the landing cost and the price we are selling, but what we are saying is that it is part of our core structure,” Ajiya explained.

“For us, it’s not a question of subsidy; we don’t know about subsidy. It was not budgeted for but the act establishing us, the National Assembly knows clearly that in that same act, there is a provision that we can run our operation and recover our cost fully.

“The NNPC act is a law on itself and the National Assembly is the one responsible for enacting laws; so, if there is any remedy or solution; as one of the senators, the issue is to look into the Act establishing these entities: NNPC,CBN etc.”