THE number of permanent voter cards so far collected across the country is 72,775,502  with the Northwest region of the country  having the highest collection of 18.23 million (18,231,193), the Independent National Electoral Commission has announced.

The final breakdown of collected PVCs was released by the commission on Thursday barely 48 hours to the general elections rescheduled for Saturday, February 23.

The data shows that among the six geopolitical zones in Nigeria, the Northwest has the highest with 18.23 million PVCs collected, followed by the South West and North Central respectively. South west has 12,814,246 while North Central has 11,567,813 PVCs collected.

The region with the least collection is the Southeast with 8,590,420 collected PVCs.

The next three states that followed are Katsina, Rivers and Delta states as shown by the table below.

The least of the states is Ekiti with 666,591 numbers of PVCs collected.

The breakdown also shows that 11.23 million PVCs were not collected which represent 13.4 per cent of the total registered voters.

The INEC chairman, Mahmood Yakubu has said a person without PVC would not be allowed to vote in any of the elections.

The implication of the high collection of PVCs  in the North West means that there are more eligible voters in the region than any other region in the country.

Below is the breakdown of the number of collected PVCs in each state as published by the INEC. 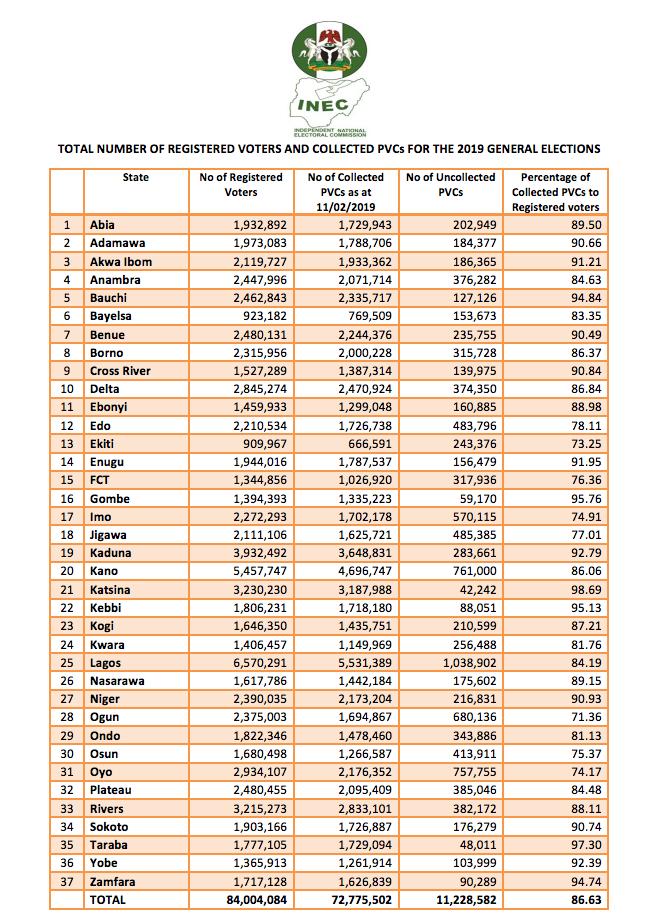