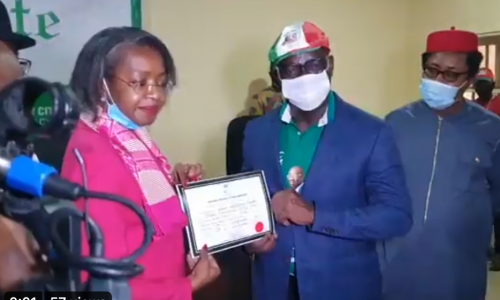 THE Independent National Electoral Commission (INEC) on Tuesday issued a Certificate of Return to Godwin Obaseki, Governor of Edo State and Philip Shaibu, his Deputy, following their electoral victory in the state governorship election held on Saturday.

The certificate was presented by May Agbamuche-Mbu, INEC’s National Commissioner supervising Edo, Rivers and Bayelsa states.

“I received my certificate of return today from @inecnigeria after the landmark victory in Saturday’s election. I restate my commitment to Edo people, to deepen sustainable development and consolidate on our sterling legacies,” he wrote.

Obaseki defeated Osagie Ize-Iyamu, candidate of the All Progressive Congress (APC), to claim a landslide victory in the keenly contested election.

Reacting to his victory on Sunday, Obaseki hailed the people of the state and supporters of his party, the Peoples Democratic Party (PDP) for their display of immense courage and support in the face of threats that saw him winning the election.

He also commended the resilience of the people in the face of  intimidation and brutality during the election.

The Governor hailed President Muhammadu Buhari and INEC as well as for ensuring a free, peaceful and credible poll in the state.

“The Great People of Edo State have spoken. They have spoken loud and clear. We thank God Almighty and give him all the glory for this victory,” Obaseki said.

“Thank you, President Muhammadu Buhari, for defending our democracy and allowing the Independent National Electoral Commission (INEC) and the security agencies to perform their constitutional functions without interference.

“INEC and the security services have shown to Nigerians and the world that they are capable of conducting free and credible elections.”

According to him, the collective will of Edo people made it possible for “this triumph over godfatherism”.

“I am eternally grateful to my party the Peoples Democratic Party (PDP) and my brother governors not only for giving me the umbrella during my political storm but for the hard work which has brought me back to office.

“Our success has reinforced my belief that there is nothing we cannot achieve as a people if we pull forces together and collectively call on God for support.”

“I reiterate that working with my Deputy, Philip Shaibu, we are committed to Making Edo Great Again. Thank you for your support,” he added.