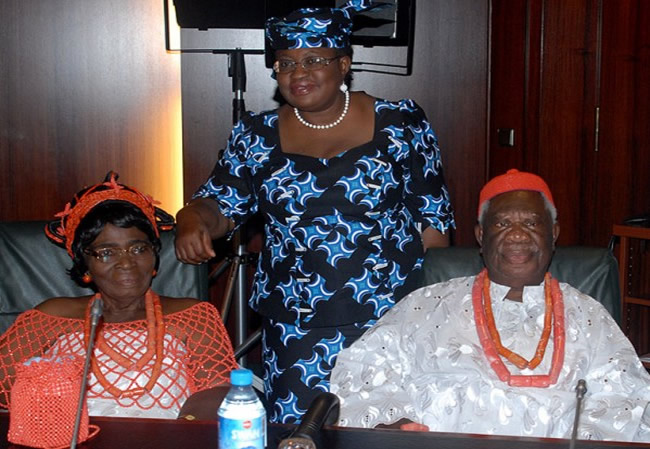 Relatives of slain prince of Ogwashi-Uku, Pentty Chukwu, have accused the minister of finance, Ngozi Okonjo-Iweala, of sending the soldiers who allegedly shot and killed the lad and wounded two others last Friday during the Iwaaji new yam festival in the town.

The victims’ relatives under the aegis of Umudei Royal Family, alleged that the soldiers were deployed to the town on the orders of Okonjo-Iweala who is also the daughter of Obi of Ogwashi-Uku, Chukwuka Okonjo.

Pentty Chukwu, (15), Kingsley Udeh (22) and Bollus Izedunor (23) all of royal blood were allegedly shot by military operatives who invaded Ogwashi-Uku during the new yam festival.

They were said to be seating at their father’s house (palace) when the soldiers came in two trucks and allegedly shot at them when they attempted to scamper for safety.

Pentty died on the spot but the other two were luckier as they sustained serious gunshot injuries.

However, in a swift reaction to the allegation, a spokesman of the palace of Obi of Ogwashi-Uku, Okolobi Lawrence, distanced the minister and the palace from the shooting incident, stating the minister was in far away New York at the time of the incident.

In a press statement titled “The Real Facts about the Recent Violence in Ogwashi-Uku: A Statement by the Palace,” Lawrence described the allegations against the minister and her father as ridiculous.

“Our attention has been drawn to a report published by an online medium in which a member of the usurper Izediunor family in Ogwashi-Uku made several reckless allegations, including murder against the esteemed Obi of Ogwashi-Uku, Professor Chukuka Okonjo and his daughter, our Princess, the Coordinating Minister of the Economy and Honorable Minister of Finance, Dr. Ngozi Okonjo-Iweala. The allegations are as false as they are ridiculous,” the statement said in part.

Continuing, palace spokesman said: “From information available to us from the State Secret Service (SSS) and the Police Force, this tiny section (Izedunor) attempted to disrupt the last Ihaaji traditional festival (Yam Roasting Festival). They mobilized some youths and unleashed violence on helpless market women and others in the vicinity in a bid to stop sons and daughters of Ogwashi-Uku and their guests from exercising their free right to attend and partake in the traditional festival”.

The statement said it was the youths that first attacked with firearms, injuring several persons before the Joint Task Force, JTF, intervened to avoid a deterioration of the situation, adding that a combined team of the Police and the JTF were able to dislodge the youths after a brief gun duel, arresting several of them.

Contrary to the impression that the only casualty recorded was a prince of the Kingdom, Lawrence said “unfortunately, a youth involved in the violence lost his life in the fracas planned and executed by these agents of destability.”