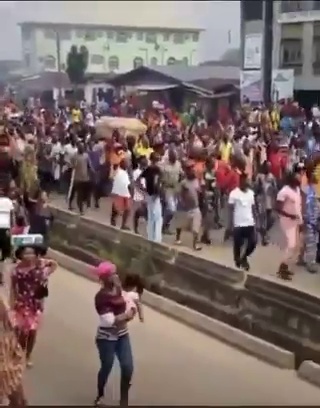 NIGERIANS, on Saturday, June 12, took to the streets to protest against governance, corruption, insecurity and other forms of maladministration.

However, an old video of a similar protest, the #EndSars,  held in October 2020, has resurfaced online.

In the video, the protesters were seen marching, while a few of them were carrying a coffin and chanting “Buhari must go.”

A Twitter user, Sophia, with the username @90sSophie, claimed that the video emanated from the June 12 protest held in 2021.

“We are stronger together. Nigeria will be great. #June12thProtest.  RT this video massively,” her tweet read.

The video of protesters with a coffin chanting “Buhari must go” emanated from June 12 protest.

Checks by The FactCheckHub showed that the video came from the #EndSARS protest of October 2020.

Multiple handles in the comment section noted that the video was old and from a different protest, urging her to take it down.

Duke Of The Streets [@CallmeUyi] wrote: “We are legit outside risking our lives. This is not the time for false narratives and sharing old online videos. We can’t be our own problems, please.”

Dogefatherbsc [@Rubyking7000] wrote: “Please take down this video, it makes the post fake, we don’t need anything that will make the protest look fake.”

The FactCheckHub subjected the video to verification by using the Invid video verifier. The result showed that video had been online since 2020.

The exact video and others from the same event taken from different angles appeared here, here, here and here on Twitter on October 19.

This was also reported.

The video of protesters with coffin chanting “Buhari must go” emanated from October, 2020, #EndSARS protest. Therefore, the tweet is inaccurate and MISLEADING.