THE Foundation for Partnership Initiative in the Niger Delta (PIND) has released its Niger Delta Annual Conflict Report, indicating that there was an increase in conflict risk and lethal violence in the region in 2019, compared to the trend in 2018.

“There were a number of changes in the Niger Delta peace and conflict landscape in 2019,” PIND said in the report released on Sunday.

The Foundation cited a variety of interrelated and often overlapping conflict risk factors that contributed to the changing conflict and security dynamics during the period.

The Foundation’s annual conflict report examined the trends and patterns of conflict risk and violence, and identifies key interrelated drivers and pressures on peace and stability at the regional, state and local levels.

The report noted that organized criminality, cult clashes, political tensions, land disputes and communal clashes were the primary causes of lethal violence during the period.

Gang and political violence increased while communal violence decreased during the year, PIND stated in the report.

The report, however noted that, like in 2018, the most violent states in the region were Cross Rivers, Delta, Edo and Rivers State.

Available data, according to the report, revealed that in the overall, the most reported incidents of violence related to criminality (including piracy, abductions, robberies, and killing for ritualistic purposes) which totalled 260 incidents resulted into 444 fatalities.

This was followed by gang/cultists supremacy clashes with 272 fatalities in 78 reported incidents, report revealed.

“Gang violence was reported in all the states in the region, but it was more prevalent in Rivers, Edo, and Delta.”

Giving further breakdown of the nature of conflicts and their consequences, the Foundation noted that communal/ethnic tensions was the third highest conflict issue in the region during the year, resulting in 197 fatalities in 77 reported incidents. These incidents included land disputes, farmer/herder conflicts, and ethnic separatist agitation, it said.

Political and election violence also caused over 100 fatalities during the period, especially in Rivers, Delta, and Bayelsa states.

In the run-up to, and during the 2019 general elections, political tension was elevated in the Niger Delta. In February, for instance, 56 fatalities were reported in the region.

The hotspots of conflict in the region remained largely unchanged in 2019, compared to 2018. According to data, the most violent states during the period, based on the number of reported conflict fatalities, were Rivers, Delta, Edo, and Cross River, respectively.

Ten local governments in six states were identified in the report as the most violent in the year 2019. 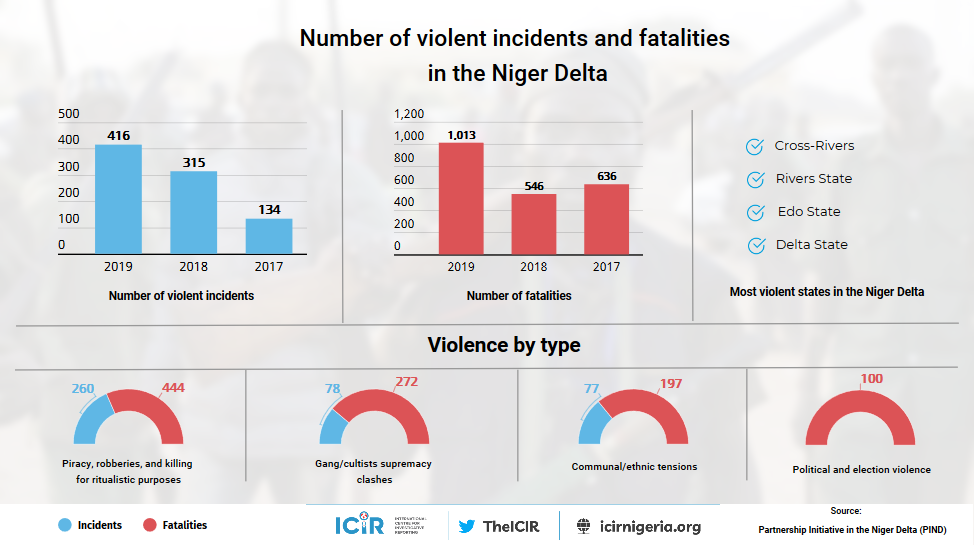 According to findings in the report, April was the most violent month during the year with a total of 150 reported fatalities.

In one incident in April, for instance, eight people were reportedly killed during clashes between rival cult groups in Rumuolumeni community in Obio/Akpor Local Government Area, Rivers State.

The Niger Delta of Nigeria is highly diverse with over 40 ethnic groups that speak more than 100 languages and dialects. The region comprises 185 out of the 774 local government areas and covers nine out of the 36 states of Nigeria.