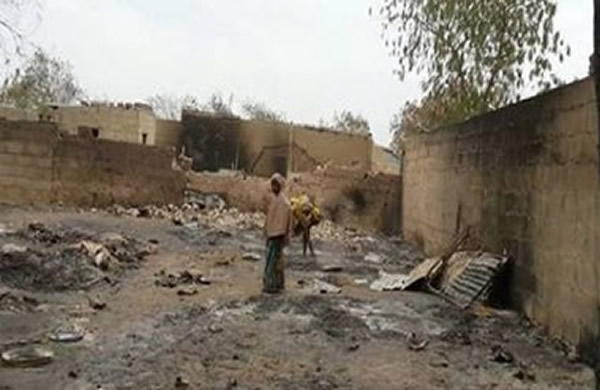 At least 47 persons have been confirmed dead after an attack early Wednesday in Bama, Borno State, the Police has said.

The Borno State Commissioner of Police, Lawan Tanko, who gave the figure said “every land mark building in the local government secretariat, the state lowcost housing estate, schools and several other buildings, as well as part of the Shehu’s palace were destroyed.”

The casualty figure is also expected to rise as search is still on for missing persons and with many other lying critically injured in hospitals.

“As at the last time I spoke to my DPO in Bama, we have had 47 dead casualty recorded, while several number of persons were confined injured, some already in hospitals there. I have instructed my men to liaise with the hospital if we can have a figure on the dead casualties,” Tanko said.

It was also gathered that the gunmen in a brazen move on Tuesday, attacked the home of the Joint Task Force, JTF, commander in the Niger-Delta, Tukur Buratai, a major general, engaging the soldiers on guard in a gun battle and killing an officer in the process.

These attacks clearly mars the victory statement by the Presidency that the army is winning the war against terrorists in Nigeria’s North-east and concerned individuals and groups are calling for stern measures that will reverse the trend and guarantee safety of lives and properties.

While this is yet to be done, people of the region continue to flee to other places, including neighbouring countries for refuge and those who cannot flee live in constant fear of imminent attacks.

House of Reps, Others Condemn Suspension of CBN Governor, Sanusi