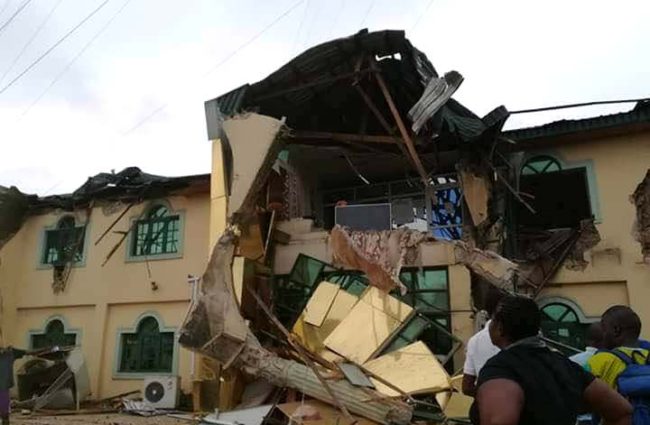 THE demolition of the popular ‘Music House’, Ibadan, owned by Yoruba gospel musician, Yinka Ayefele, by the Oyo State government has been condemned by many Nigerians as an ill-advised move by the state governor, Abiola Ajimobi.

The Music House also houses Fresh FM, a radio station also owned by Ayefele, and which has been described by Many, including Ajimobi, as the best in the whole of the state.

The demolition, which began as early as 4am on Sunday, came despite a court order obtained by Ayefele’s lawyer, Olayinka Bolanle, restraining the state government from going ahead with the exercise. The court had fixed Monday, August 20, for hearing of the case.

Many who reacted to the development on the social media pointed out that the demolition exercise will throw the staff members of Fresh Fm back into the labour market, thereby increasing the level of unemployment in the State.

Others wondered why the Governor would demolish a property for which the owners had been paying relevant taxes and levies for the past ten years, just to satisfy his personal ego.

“The constituted authority in Oyo State (Governor Ajimobi)demolished a whole company to service his ego, while we are still dealing with the unemployment and job-loss rate in this country. If Yinka Ayefele committed a crime, did the other staffs who earn a living from fresh fm commit crime too?” wrote Oluyemi Fasipe, a Twitter user.

Some also recalled the demolition of a property in Kaduna State belonging to a serving senator, Suleiman Hunkuyi, who, though was a member of the ruling All Progressives Congress, (APC), had fallen out with the State Governor, Nasir El-Rufai. Hunkuyi later decamped to the opposition Peoples Democratic Party (PDP).

Below are a few tweets about the demolition of Music House on Sunday:

The Aftermath of the Demolition of @YinkaAyefele‘s Music House, home to @freshfmibadan today by Oyo State Government will be:

When u have dealers as leaders from @OfficialAPCNg , d ppl mourn

How much power can you possess forever, how much? so much to destroy something beneath you?

I condemn what the Oyo state government did to Yinka Ayefele’s Radio station. What is the justification?

Another Abacha move in a democratic dispensation

LAUTECH is currently on strike, the school have had funding issues for over 4years, the Oyo State government have not been able to make any meaningful changes, but was fast to demolish Yinka Ayefele's Radio station under the guise of dealing with infraction.

Ajimobi has done the unexpected, he is so overwhelmed with power that he couldn’t thread with caution.

This building has helped in the employment of over 100 youths.

He is indeed the constituted Authority of Oyo State.

This era shall pass. pic.twitter.com/Q5e3zG6LAQ

From info, the same building was approved by the Oyo State government, the owner, Yinka Ayefele has been paying his taxes, levies etc for the past 10 years, one power drunk governor woke up and demolish a well over 800m private property that housed Fresh FM.

Yinka Ayefele’s Fresh 105.9 FM in Ibadan, Oyo State demolished. There’s a deliberate clampdown against the PRESS under this government.

The only crime of this FM station is that they are too critical of government. Which way Nigeria? NEVER AGAIN pic.twitter.com/8PILjiMEem

Earlier, while explaining why the building, popularly known as ‘Music House’, will be demolished, the Oyo State Commissioner for Information, Culture, and Tourism, Toye Arulogun, said it violated the originally approved plan, and as such, is “structurally defective, poses danger or constitutes a nuisance to the occupier or the general public”.

However, Ayefele, who has been wheelchair-bound since surviving a serious car crash in 1997, believes the demolition was politically motivated, saying that he is being persecuted for not belonging to the same camp as the governor.

“Saying that Music House complex is responsible for three accidents that occurred on the road in the last nine months is just an attempt by the commissioner to run away from his shadow. How can a reasonable person say that?” Ayefele said.

“It is not news that the governor himself said some politicians came to him to demolish the Music House complex because Ayefele is not in their camp and he also sang against them.”

Hundreds of people, mostly fans of Ayefele’s and Fresh FM listeners, gathered at the scene of the demolished building but the government agents that carried out the exercise had long left before the crowd started arriving.

Chat us on WhatsApp
Advertisement
Previous articleKofi Annan: Africa’s proud son who married a Nigerian
Next articleFOUR YEARS AFTER: Adadevoh yet to receive post-humous national award?