120 days after, Buhari yet to act on Shittu’s NYSC scandal 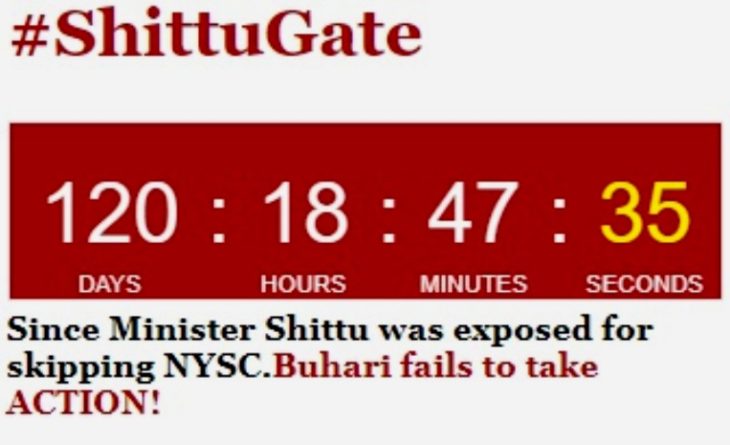 IT has been over 120 days since it was uncovered that President Muhammadu Buhari’s Minister of Communication, Adebayo Shittu, did not take part in the mandatory one-year national service for all Nigerian citizens who graduated from the University before the age of 30.

The report detailing Shittu’s NYSC skipping scandal was published by Premium Times on September 20, 2018, exposing how the minister had graduated from the department of law in the then University of Ife (now Obafemi Awolowo University, Ile-Ife) at the age of 25.

Shittu admitted that he did not take part in the NYSC scheme, but claimed that he thought his first political post after graduation could suffice as national service.

According to him, he contested and won a seat in the Oyo State House of Assembly immediately after his graduation from the law school, and that he believed serving as a state legislator is also the same thing as serving the country in the NYSC.

Shittu’s NYSC scandal was uncovered by Abdulaziz Abdulaziz, the same reporter who unearthed the case of certificate forgery involving the former Minister for Finance, Kemi Adeosun.

Adeosun who graduated from a foreign university before the age of 30, did not take part in the NYSC as required by law, rather she procured a fake NYSC certificate and was parading same as the original. She has since resigned from her post and returned to her base in the UK, after explaining that she did not know that the certificate given to her was fake.

Section 2 (1) of the NYSC Act mandates all Nigerians who earn degrees or higher national diplomas from tertiary institutions in Nigerian and abroad (effective 1972/73 session) to participate in the scheme.

Skipping the compulsory national service is an offence under the NYSC law and it is punishable with up to 12 months imprisonment. Also, employers are mandated by law to always request NYSC certificate of national service from employees as part of the conditions for hiring.

Those exempted by the law are those who graduated after their 30th birthday, persons with national honours and individuals who serve in the military and intelligence organisations. Shittu does not fall into any of these categories.

However, in outright violation of the NYSC Act, Shittu has held many top offices both in the executive and legislative arms of government in the federal and state governments.

Aside from being a state lawmaker, Shittu has also served as the Oyo State Attorney General and Commissioner for Justice, as well as a member of the Oyo State Judicial Service Commission.

At the time the NYSC scandal story broke, Shittu was preparing to run for the governorship position in Oyo State, but his party, the ruling All Progressives Congress screened him out citing his non-participation in the mandatory one-year national service as reason.

Even at this, President Buhari still did not see the need to act on Shittu’s clear violation of the NYSC Act.

Meanwhile, Shittu said he has gone to court to seek clarification on whether his joining the Oyo State Assembly immediately after leaving law school does not amount to national service.