Birnin- Gwari massacre: 84 killed in seven weeks − What do the killers want? 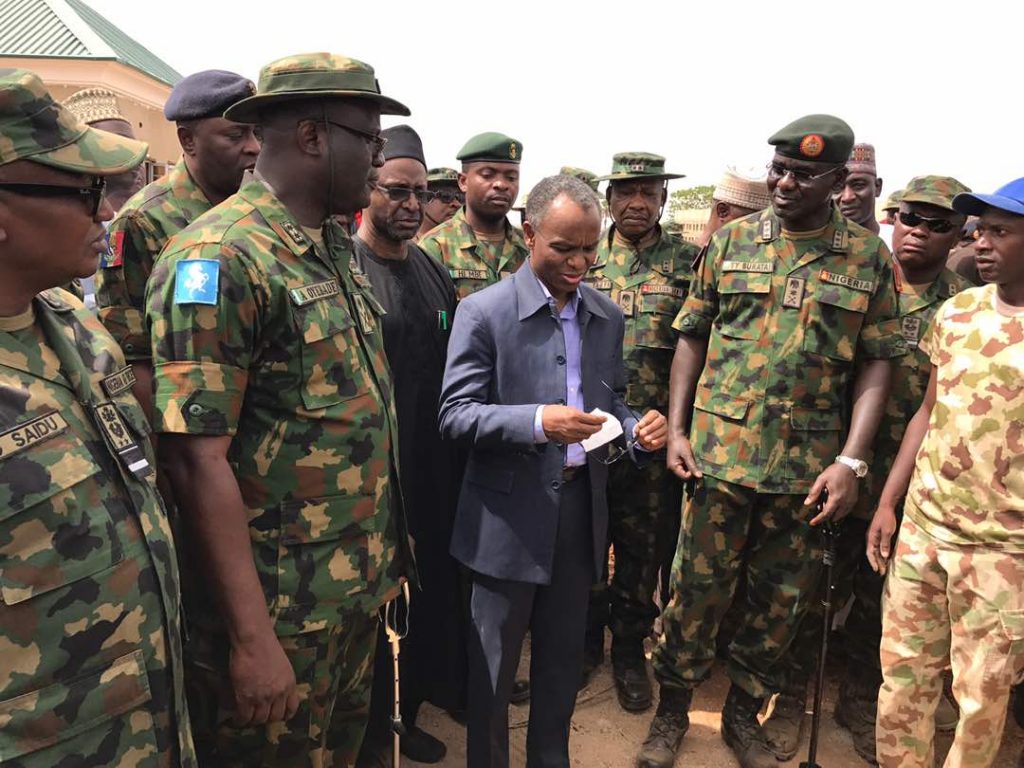 Recently, Birnin- Gwari local government area of Kaduna State has been in the news for a  wrong reason.

Located in the central senatorial zone of Kaduna State, Birnin- Gwari has become notorious for kidnapping, armed robbery, cattle rustling and mass murder, a situation that has created major security challenge for residents and the state government.

Between March 13 and May 6, 2018, not fewer than 84 persons, including 11 men of the Nigerian Army have been killed by unidentified gunmen who have turned the local government area to a killing field. 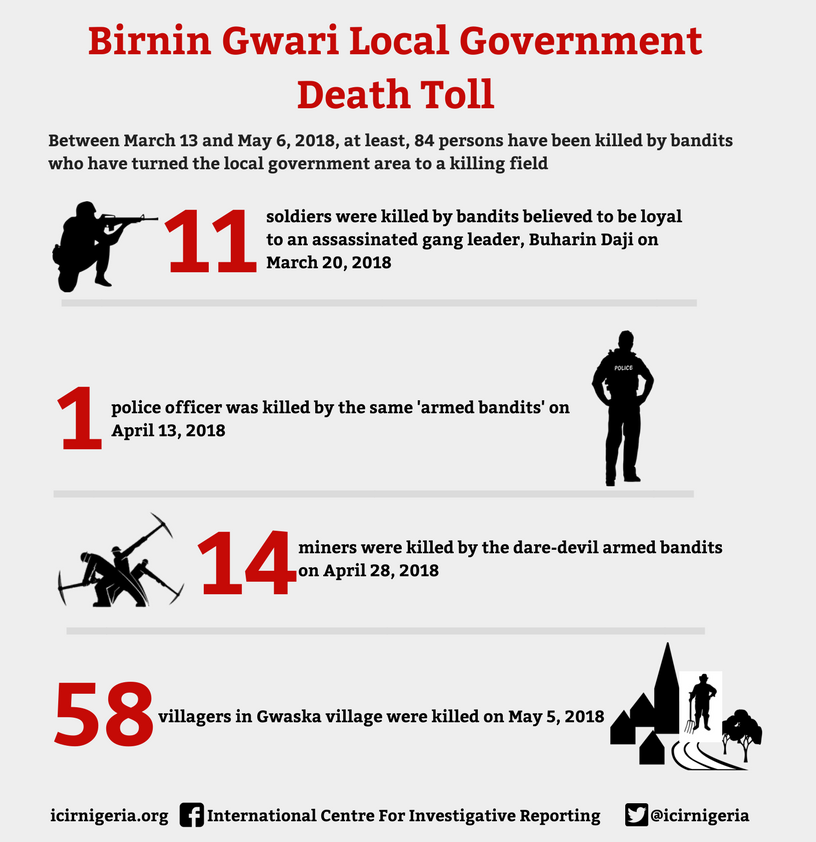 Nasir El-Rufai, Governor of Kaduna State, had said that the gold deposit in Birnin-Gwari is larger than the gold reserves in South Africa.

Local miners and their customers have been making brisk business at different mining sites at the local government area. Rima and Bugai – where there are some of the mining sites, 12km and 16km away from the main Birnin-Gwari town− are yet to witness attacks.

Nobody has been able to identify the attackers or their sponsors. Yet, they have moved from one village to another, namely Nabango, Janruwa, and Gwaska among others, leaving tales of woes behind. While some believe they are cattle rustlers,others think they  are ‘armed bandits’. 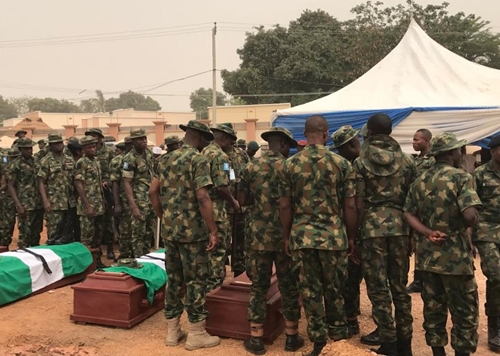 Tuesday, March 20, 2018,  Nigerian Army lost 11 of its personnel to the gang. The soldiers were believed to have been killed by members loyal to an assassinated gang leader, Buharin Daji, in a reprisal attack.

Reports say that the well-armed bandits stormed a military post at Doka, an area between Funtua and Birnin-Gwari and killed the soldiers on the spot.

According to reports, the gunmen on a revenge mission over the killing of Buhari Tsoho had earlier in the afternoon attacked Maganda District  where nine members of security volunteer groups were critically injured.

After Maganda, the armed bandits moved towards Kampanin Doka at the junction road leading to Gwaska and Dansadau and relaunched another attack leading to the death of the soldiers.

A leader of security volunteer groups in the town said that the community had notified Kaduna State government since last week of strange movements of bandits in Birnin-Gwari through Funtua-Dansadau axis, but no action was taken.

He said the killing of the bandit commander, Buhari Daji at Nabango area in Birnin-Gwar  led to strange movements of  armed men in the area.

“In fact since the killing of Buharin Daji, kidnappers have been having field days along Birnin-Gwari-Funtua road on a daily basis. Some villagers being terrorized by armed bandits in Kirazo and Layin Mai Gwari had to relocate to Birnin-Gwari town.

“Surprisingly, shortly afterwards, some soldiers that were deployed for ‘Operation Karamin Goro’ in Birnin-Gwari were withdrawn, leaving behind few soldiers who stayed inside the town,” he said

The soldiers, all Privates, include Bamidele Adekunle, Christain Owhochukwu, Adam Muhammad, Sulaiman Mubarak, Bashir Sani, Usman Abubakar, Nafi’u Iliyasu, Safiyanu Ahmad, Alhassan Ibrahim and Adegunde Emmanuel, and all enlisted into the army in 2017 as well as Hammed Olubode who enlisted in 2015.

The mourning of the killed soldiers was just abating when  the same ‘armed bandits’ on the evening of Thursday, April 13 killed a police officer and abducted some members of the Nigerian Union of Road Transport Workers (NURTW) in the troubled Birnin Gwari town. The kidnap occurred at Dan Falo village, along Funtua road.

The chairman of the NURTW, Birnin Gwari garage branch, was among those abducted.

A community leader in the area, who identified himself as Hussaini, gave the name of the kidnapped NURTW chairman as Audu Kano.

Other abducted persons are Hamisu, Umar ba Matsala, Safiyanu dan Doka and Mika while the policeman killed was Dan zuru, he said.

“I know all the people abducted because they are from Birnin Gwari town. They are attached to the only motorpark in Birnin Gwari.

“They were returning from Funtua town in Katsina State where they attended a wedding fatiha in the town. The gunmen abducted the union chairman and four other members of the union,” he said. 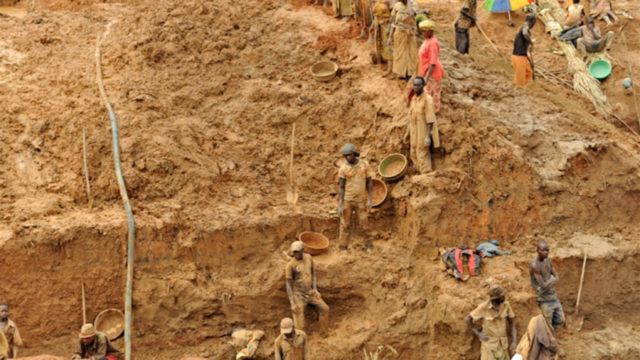 Saturday April 28, 2018 was yet another mourning day in Birnin-Gwari when the dare-devil armed bandits killed 14 local miners in the area.

Though the police confirmed 10 people dead, villagers however, said about 14 people were gunned down by the bandits.

They were reported to have attacked the mining site around 12: 45 pm on that fateful day and opened fire on the miners.

‘In a cruel and inhuman manner, the bandits burnt many of their victims beyond recognition, sources said.

YET ANOTHER ATTACK: 58 KILLED IN GWASKA 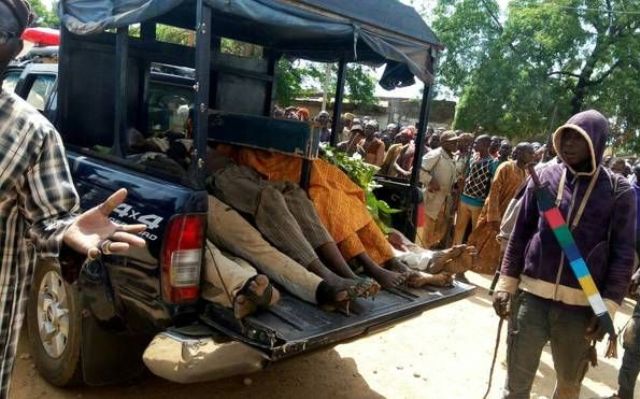 Described as the worst in the league of attacks unleashed so far on Birnin-Gwari, the Saturday attack at Gwaska village left in its wake 58 people dead. The police said 45 people were killed.

“Yes, 45 people were confirmed dead and as we speak the state command has already deployed 150 policemen to the area to provide security,” said Austin Iwar, Kaduna State Police commissioner.

The gunmen also killed the Sarkin Fawa (Head of local vigilante) who was on his way back to the village.

Following the latest attack, Governor of Kaduna State Nasir El-Rufai, announced that the Federal Government had agreed to deploy a permanent army battalion in the troubled area.

As the bandits continue to attack the people of Birnin Gwari, residents are wondering if they are the same gang that have been foisting attacks on Zamfara State and its environs. Who they are, what they want and why they kill people are still the questions security operatives would help to unravel.

AN Abuja Federal High Court on Monday, January 30, dismissed a suit by a...

TWO Nigerian nationals were reportedly killed in Johannesburg, South Africa at the weekend amid...

THE increasing number of invalid votes has been a major concern for Nigerians going...

NIGERIANS in the Diaspora have been excluded from the ongoing cash swap programme launched...

A Nigerian physician Pedus Eweama has been bestowed with the Community Citizen of the...
Advertisement

Chat us on WhatsApp
Advertisement
Previous article
Herdsmen, bandits are nothing but terrorists, says Shehu Sani
Next article
Police behaved like ‘clan of tribesmen’ against Melaye – Dogara says after meeting Buhari