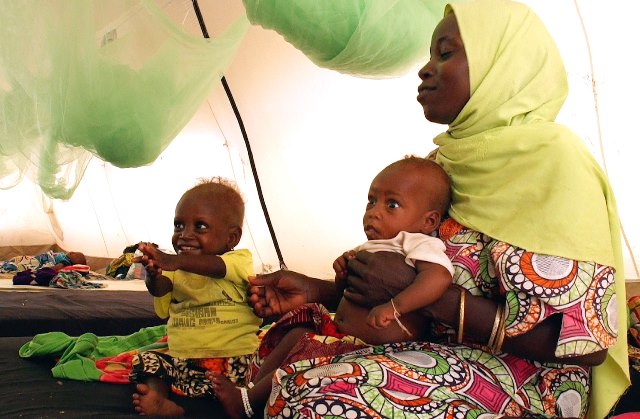 The International Committee of the Red Cross, ICRC, has revealed that it has treated over 13,000 children under the age of five suffering from severe acute malnutrition in North East Nigeria.

According to a statement released by the International Non-Governmental Organisation on Tuesday, 436,000 patients have been treated in ICRC facilities in Nigeria since the beginning of 2016.

A breakdown of the figure indicates that 1,800 weapon-wounded patients from Boko Haram crisis were treated and 15,500 babies were delivered in ICRC-supported clinics across the country.

The ICRC also said it has supported 16 primary Health Care centres and nine mobile clinics providing primary health-care services to Internally Displaced Persons, IDPs, as well as returnees and residents in the North East during the year.

The Red Cross revealed that it’s surgical teams in the North East treated 90 persons who were injured in the recent suicide bomb attacks that occurred in Madagali, Adamawa State and Maiduguri, last week.

“An ICRC surgical team, together with surgeons from Michika Hospital, treated 76 victims of the blast in Madagali market, while another ICRC surgical team treated 15 people injured in Maiduguri on Sunday morning,” said Hashemi Said Padshah, an ICRC health coordinator in Nigeria.

The statement revealed that the ICRC currently has two surgical teams in Nigeria, both based in the State Specialist Hospital in Maiduguri, in Borno state.

“They treat people wounded in the conflict and internally displaced people in need of surgical care. They are also ready to help other hospitals cope with a sudden influx of mass casualties at a moment’s notice.

Each team consists of a surgeon, an anaesthetist and a nurse, all of whom are experienced in dealing with wounds of this kind,” Padshah explained.

The ICRC said it has trained “nearly 400 Nigerian doctors and nurses” in the last 7 years “on how to treat weapon-wounded patients.”

“We aim to equip Nigerian practitioners with these extra skills because everyone has a right to health care in armed conflict, regardless of what side they are on or their political or any other affiliation,” Padshah said.