THE Federal Capital Territory Emergency Management Agency (FCT EMA) has told residents of Abuja and environs to remain calm after an earth tremor was felt in some parts of the capital city.

Residents in several parts of Abuja, including Jabi, Maitama, Mpape, Katampe, and Gwarimpa had taken to the social media to say that they felt their houses shake on Wednesday and Thursday, while some called the FCT EMA to register their concerns.

Former Chairman of the Bureau of Public Service Reforms, Joe Abah, said the vibration in his house in Jabi felt like the day the United Nations building in Abuja was bombed in 2011.

“I felt my house in Jabi, Abuja, vibrate around 9 pm last night. It didn’t feel like an earth tremor. It was more like an explosion that pushed air, rattled the windows and shook chandeliers. Almost exactly like when the This Day Office in Utako was bombed some years ago,” Abah tweeted.

I felt my house in Jabi, Abuja, vibrate around 9pm last night. It didn’t feel like an earth tremor. It was more like an explosion that pushed air, rattled the windows and shook chandeliers. Almost exactly like when the This Day Office in Utako was bombed some years ago.🤷🏽‍♂️ https://t.co/yhDwpldjSu

In a statement on Friday, the FCT vibrations felt across the city could be as a result of an earth tremor, which it described as “a sign of seismic movement within the earth”, usually caused by “sudden breaks along a fault line which results in sudden release of energy that makes the ground to shake”. 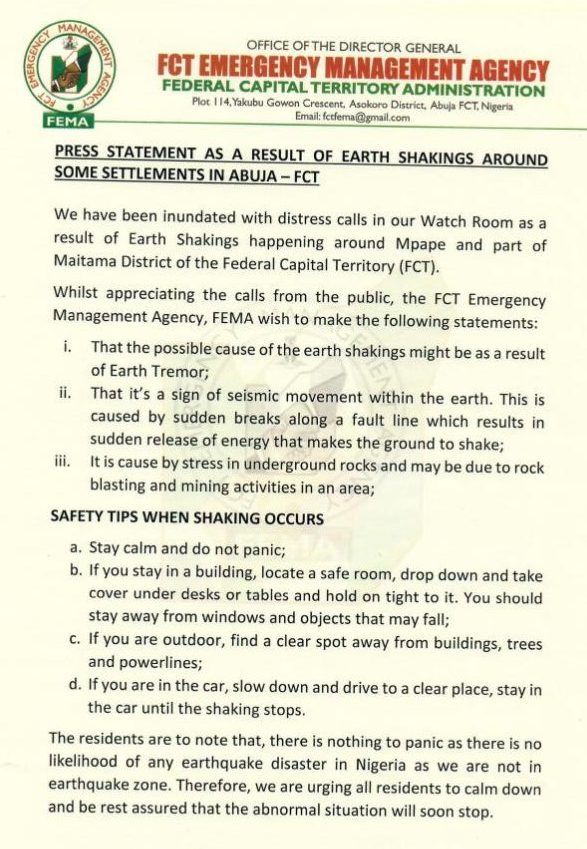 An earth tremor can also be caused by “stress in underground rocks and may be due to rock blasting and mining activities”.

The Director General of the FCT EMA, Abbas Idris, who signed the statement, urged citizens not to panic or think that an earthquake was imminent. “There is no likelihood of any earthquake disaster in Nigeria as we are not in earthquake zone,” Idris stated.

He urged residents to calm down as the abnormal situation will soon stop. In any case, Idris gave tips on what people are to do during earth tremors.

“If you stay in a building, locate a safe room, drop down and take cover under desks and tables and hold on tight to it. You should stay away from windows and objects that may fall.

“If you are outdoors, find a clear spot away from trees buildings and power lines.

“If you are in the car, slow down and drive to a clear place, stay in the car until the shaking stops,” Idris advised.

Osun needs a surgical operation to come out of coma, says Omisore

Food security: Women farmers in Abuja count losses even as…

Victims of house demolition in Abuja blame authorities for…

FCTA demolishes buildings in Abuja to pave way for road…