REMINDER: 10 times Buhari, his ministers were “not aware” of obvious happenings

SINCE the start of his administration in May 2015, there have been many instances when President Muhammadu Buhari, his ministers, and other public officials denied knowledge of issues, which they ordinarily should have been aware of.

The latest of such incidents happened about two weeks ago when Minister of Communications and Digital Economy, Isa Ali Pantami, said he had no prior knowledge that increased 7.5 per cent Value Added Tax (VAT) charges applied to voice calls and text messages.

But it is not only Pantami who has goofed. Records show that at different times, President Buhari, Information Minister Lai Mohammed, the Nigeria Immigration Service, police, and others have committed similar blunders. In this report, The ICIR flashes back to some of these moments of indiscretion.

Buhari: Not aware IGP did not obey instruction

President Buhari had in March 2018 admitted that he was unaware Inspector-General of Police (IGP) Ibrahim Idris did not comply with his instruction to relocate to Benue state.

He had visited the state following deadly clashes between farmers and herdsmen. “I’m not aware that the I-G did not spend 24 hours in the state as directed by me, I am getting to know in this meeting,” he said.

Buhari: Did not know most of his ministers

In July, President Buhari said he had no idea who the majority of the ministers he appointed in his first term were. During a courtesy visit to the Statehouse by federal lawmakers, he said, “The last cabinet which I had, most of them, a majority of them I didn’t know.”

“I had to accept their names and recommendation from the party. I worked with them for three and a half years,” the president added.

He promised that for his second term in office he would adopt a different approach by appointing only people he personally knew.

Spokesperson of Adams Oshiomhole, chairman of the ruling All Progressives Congress, said in August 2018 that his boss was not aware operatives of the State Security Services (SSS) had laid siege on the National Assembly.

The SSS had prevented lawmakers and journalists from entering the premises, triggering widespread condemnation. There were speculations that Oshiomhole was planning to get the former Senate President Bukola Saraki removed from office.

“He has not been briefed about the matter and he is not a security officer,” Oshiomhole’s spokesperson, Simon Egbegbulem said hours after the incident.

“The Chairman is not even aware of what is happening at the National Assembly. He travelled yesterday and came back and not quite long he got back to the office. He has not been briefed by anybody.”

Nigeria’s information and culture minister, Lai Mohammed, said during an interview with the German news channel, Deutsche Welle, in January that he was not aware of the highly controversial social media bill. The host, Tim Sebastian had asked him about the Protection from Internet Falsehood and Manipulation Bill, which is the bill’s short title.

“And who is the author of that bill?” Mohammed asked. “I am not even aware of that bill.”

The ICIR had pointed out in a fact-check that despite claiming he read it during the interview, Mohammed was also wrong when he said the 2019 UN report on extrajudicial killing in Nigeria gave no particular examples.

Immigration: Not aware of the US travel ban

Earlier in February, the Nigeria Immigration Service (NIS), through its spokesperson James Sunday, said it was “not aware of the travel restriction placed on Nigeria” by the US government.

This was contained in a report by Guardian Nigeria published two days after the ban was announced by Homeland Security.

Police: Not aware journalists were attacked

The Police Public Relations Officer, Frank Mba, told the Committee to Protect Journalists (CPJ) he was not aware of any cases of assault on reporters covering gubernatorial elections in Kogi and Bayelsa states last November.

This was despite several reports of such attacks by major news platforms including Punch Newspaper and Premium Times, and noted by Press Attack Tracker.

“The safety and wellbeing of journalists and media practitioners generally were of paramount importance to the Nigeria Police Force,” Mba had nonetheless assured. 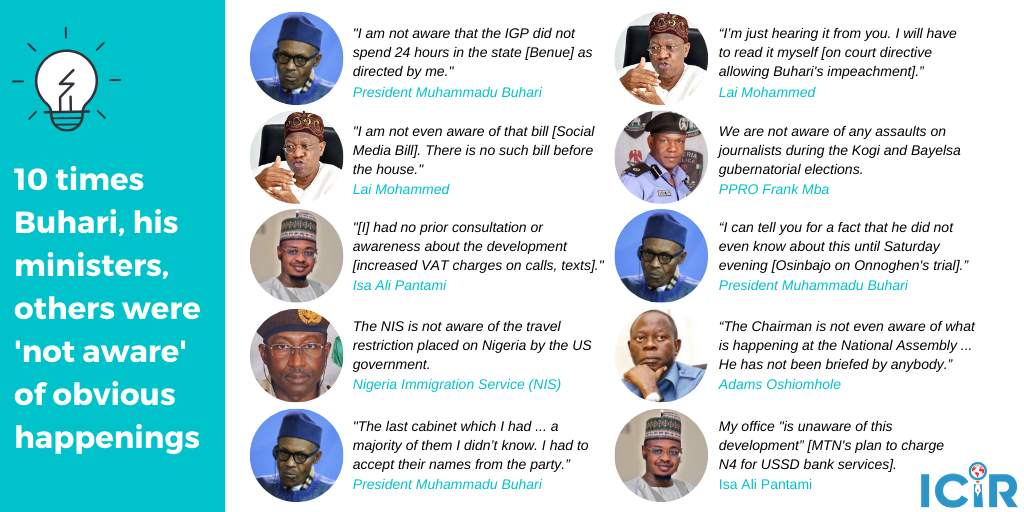 There are more cases of the public officials feigning ignorance of events happening around them.  Buhari, according to Vice President Yemi Osinbajo, was not aware the Code of Conduct Tribunal filed charges against the Chief Justice of the country, Walter Onnoghen, until two days after, January 12.

“I can tell you for a fact that he did not even know about this until Saturday evening,” he stressed.

Pantami, in October, confessed he was not aware of any plan by MTN Nigeria to begin charging N4 per 20 seconds for USSD bank services.

“The office of the Honourable Minister of Communications Dr Isa Ali Ibrahim Pantami is unaware of this development,” the minister’s spokesperson said in a press statement, adding that the plan would be suspended till he was “fully and properly briefed”.

Likewise, Information Minister Mohammed had in July 2018 said he was unaware of a court directive granting the National Assembly leave to kick-start impeachment processes against Buhari though it was widely reported.

“I’m just hearing it from you. I will have to read it myself,” he told the Statehouse correspondents who questioned him about the development.

Chat us on WhatsApp
Advertisement
Previous articleInflation rose by 0.15 per cent in January 2020 – NBS
Next articleSenate Committee Chair on Appropriation says Nigeria’s Auditor-General Office is designed to fail