FACT CHECK: No social media bill before NASS and three other recent lies from Lai Mohammed

NIGERIA’s information and culture minister Lai Mohammed, during a recent visit to London, was featured by Deutsche Welle (DW) in an half-hour-long interview the German news channel shared on Wednesday.

The minister responded to questions on a number of allegations against the country, including human rights violations, extrajudicial killings, corruption, lack of transparency in the extractive sector, and lack of press freedom.

He insisted, despite several reports to the contrary, that Nigeria has been cooperating with the International Criminal Court and United Nations, in terms of providing needed information about the cases of rights violation. But on Friday, the US government banned Nigerians from obtaining certain visas based on a similar allegation: not complying “with the established identity-management and information-sharing criteria”.

In this fact-check, The ICIR takes a look at four claims made by Mohammed, which we have found to be false and misleading.

DW’s Tim Sebastian asked Mohammed about a 13-page report released last September by Agnes Callamard, the UN Special Rapporteur on extrajudicial, summary or arbitrary executions. Callamard had talked about “country-wide patterns of abuses, including the police and military’s excessive use of lethal force and violation of international standards”.

Reacting to findings of the report, the information minister, who confirmed reading it, said he “would have been much more impressed if examples are giving”.

But, contrary to his suggestion, examples were in fact given by Callamard—at least 12 of them. On page 7, the UN highlights allegations of human rights violations in the Middle Belt, including that:

The report also mentioned instances of government crackdown against the Islamic Movement of Nigeria (IMN) as well as arbitrary killings of the members of the Indigenous People of Biafra (IPOB).

No social media bill before the National Assembly

Sebastian asked the information about the Protection from Internet Falsehood and Manipulation Bill, which he said carries draconian provisions and through which journalists could be imprisoned.

“And who is the author of that bill?” Mohammed interjected. “I am not even aware of that bill,” he said when DW asked for his position.

“It’s causing an outcry internationally and you are the minister of information and you know nothing about it?” Sebastian asked.

But the Protection from Internet Falsehood and Manipulation and Other Related Matters Bill is the short title given to a bill introduced in November by Mohammed Sani Musa, the lawmaker representing the Niger East senatorial district.

Also known as the social media bill, it has already passed first and second reading and has been referred to the Senate Committee on Judiciary, Human Rights and Legal Matters—despite widespread condemnation.

No other govt. has convicted high-profile politicians

According to Mohammed, “No government has ever succeeded in securing the conviction of high-profile politicians like this administration, especially those of them who belonged to the ruling party. We continue to fight corruption.”

But the records show otherwise.

In 2009, the Lagos State High Court convicted Olabode George, former chairman of the Nigerian Ports Authority, of contract splitting and inflation, and sentenced him and four others to a 28-year jail term. The Court of Appeal upheld this verdict. The Economic and Financial Crimes Commission (EFCC) had indicted George when Nuhu Ribadu was chairman, but the prosecution started in 2008 with Farida Waziri heading the commission.

George was a chieftain of the People’s Democratic Party (PDP), which only ceased being in power at the federal level in 2015. At various times between 2001 and 2008, he was national vice-chairman in the southwest zone, deputy national chairman (South) and head of the national disciplinary committee.

Though later pardoned by former President Goodluck Jonathan, late Diepreye Alamieyeseigha was convicted in 2007 for money laundering and not declaring his assets and was sentenced to two years imprisonment. Until his impeachment in 2005, he was a two-time governor of Bayelsa State and member of the PDP.

Another member of the (then ruling) PDP, former Edo governor Lucky Igbinedion was fined in December by a Federal High Court in a N25 billion financial fraud case.

Other high-profile corruption cases concluded in Nigeria, as compiled by TheCable, involved former IGP Mustapha Balogun and former assistant director in the federal civil service John Yusuf. The criminal prosecution of former Plateau governor Joshua Dariye and former Abia governor Orji Uzor Kalu, who were respectively convicted in 2018 and 2019, was also set in motion during the rule of PDP.

No missing oil money since 2015

The information minister was asked about a report from Global Witness that said most Nigerians live in poverty despite a 50-year oil boom and an estimated $400 billion has gone missing from state coffers. He replied that, under the watch of the current administration, allegations of embezzlement cannot be substantiated.

“I can say categorically that between 2015 and today, nobody can talk about oil money missing,” Mohammed said right before the DW interview ended.

There have, however, been such allegations under the Muhammadu Buhari-led government.

A 2016 report published by the Natural Resource Governance Institute stated that, within the first six months of Buhari’s presidency, the Nigerian National Petroleum Corporation (NNPC) withheld over N824.7 billion from a total revenue of N1.24 trillion got from crude oil sales — “about 14 per cent more than the amount withheld by the corporation under the Goodluck Jonathan administration in the first half of 2015”.

In 2018, Dino Melaye, then the lawmaker representing Kogi West senatorial district, alleged “monumental corruption” at the NNPC involving an account unlawfully operated under a commercial bank and used to siphon millions of dollars.

The following year, the NNPC itself admitted there is still corruption in its operations and disclosed that it recovered $1.6 billion from companies “who were fleecing the NNPC subsidiary, the NPDC”. 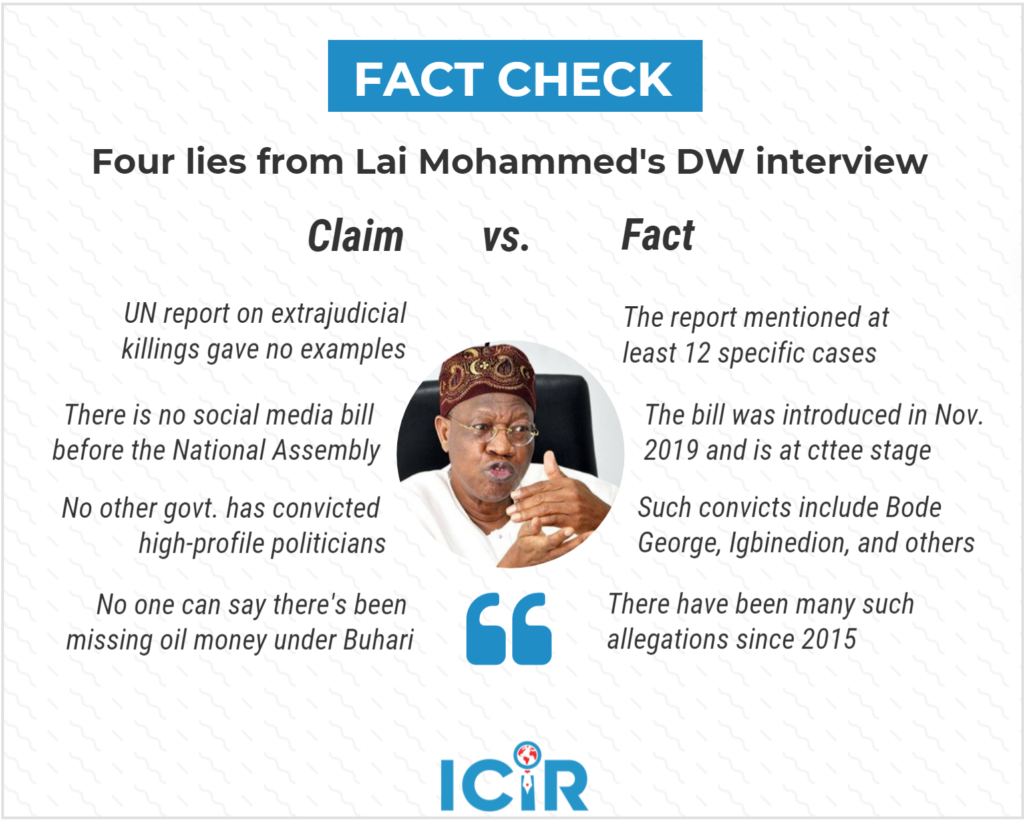 It is not only the information minister who made misleading statements during the interview, DW’s Sebastian also blundered.

Besides wrongly claiming Nigeria’s hate speech bill was sponsored by the executive arm, he cited a report from the National Resources Institute which, “based on data from 2017,  you have failed to regularly to disclose publicly the financial interests of government officials in the extractive sector, all the identities of beneficial owners in extractive companies despite making public commitments to do so”.

Mohammed appeared to have misinterpreted the question as he instead talked about assets declaration by public officials as regulated by the Code of Conduct Bureau.

But then, the latest development is that this trend in the extractive sector has been reversed. Two weeks after promising publicly to do so last November, the Nigerian Extractive Industries Transparency Initiative (NEITI) released a register of beneficial owners of oil assets and companies.

Data from its web portal, accessed on Friday by The ICIR, has names of 181 and 92 beneficial owners in the oil & gas and solid mineral industries respectively.

NNPC in precarious situation as investments could turn into…