ACCORDING to the 2018 World Terrorism Index Report (WTIR), the counter-terrorism operations of the Nigerian military have yielded positive results so far as is evidenced by the drop in the number of terrorism-related deaths in the country.

However, “in Nigeria in 2018, there has been a dramatic increase in violence involving Fulani extremists even as deaths committed by Boko Haram are falling”.

“There has been a resurgence of the pastoral conflict in Nigeria over the past year, with Fulani extremists carrying out a number of high-profile attacks in the past six months,” the report read.

“Total deaths from terrorism in Nigeria fell to 1,532 in 2017, a decrease of 16 per cent from the prior year. The decline follows the 63 per cent drop in deaths in Nigeria in the preceding year and a 34 per cent drop in 2015. This highlights the effectiveness of the counter-insurgency operations undertaken in Nigeria and its neighbours, Cameroon, Niger and Chad.”

The Fulani herdsmen attack in Zaki Biam, Benue State, on March 20, 2017, in which 73 persons were killed after the assailants opened fire in a market, was rated as the 17th most fatal terrorist incidents in the world during the year in review. While the Boko Haram ambush on the NNPC oil exploration team in Jibi, Borno State in July 2017, where about 69 persons were killed, was rated the 20th most fatal terrorist incident that year.

Nigeria remains the third on the list of countries most impacted by terrorism in the world, behind only and Afghanistan Iraq. 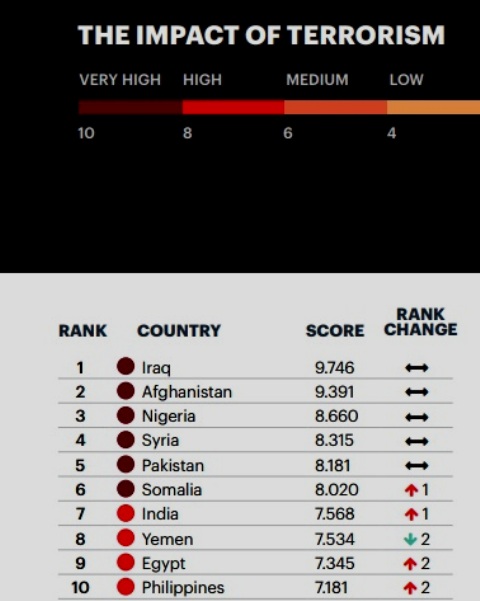 Overall, “the Islamic State of Iraq and the Levant (ISIL), the Taliban, Al-Shabaab, and Boko Haram were responsible for 10,632 deaths from terrorism in 2017”, however, the statistics for 2018 suggests that the number of terrorism-related deaths will continue to fall.

“Jama’tu Ahlis Sunna Lidda’awati wal-Jihad, more popularly known as Boko Haram, once the world’s deadliest terror group, has experienced a significant decline since its peak in 2014. However, the group remains the most active terrorist organisation in Nigeria and until 2017 was the deadliest terror group in sub-Saharan Africa,” the report read in part.

“However, the sizeable drop in deaths and terror incidents since 2014 indicate the success of Nigeria’s Civilian Join Task Force and international coalitions.

“Alongside its counterinsurgency plan, the Nigerian government also struggles with negotiations and reintegration efforts regarding its longterm strategy to deal with Boko Haram and its associates.

“Of the ten deadliest attacks Boko Haram committed in 2017, all were in Nigeria and nine were in the Borno State. The group’s deadliest attack was an armed assault against a Frontier Exploration Services convoy that killed 69 people, most of whom were civilians.

Boko Haram has specialised in maximum-impact bombings and explosions since its initial insurgency in 2009.9 It is well known for its use of more uncommon terrorist tactics, including mass hostage-takings and the extensive use of children and women as suicide bombers.”