Featured News
By YEKEEN Akinwale On May 4, 2020 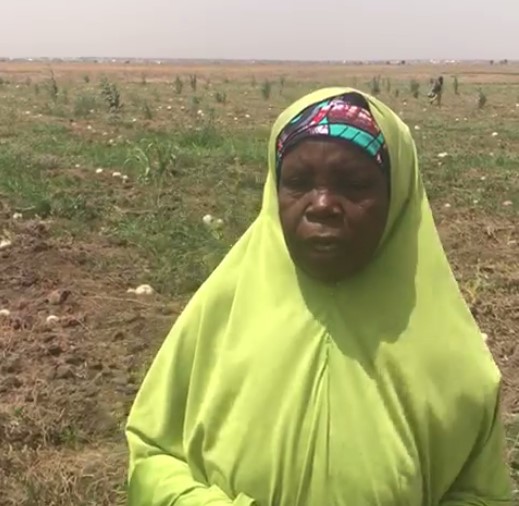 WAKILI Fatima is overwhelmed with sadness as she watches her farm produce—watermelons rot away. It is more painful seeing herds of cattle encroach her farm, eating up all farm produce.

Though there is high demand for farm produce, there is no way to get them to market due to the government lockdown order to contain the spread of novel Coronavirus disease.

Watermelons are easily perishable and can only keep for two to three weeks at low temperature between 11°C to 15°C, SENCE Agric, a Lagos based agribusiness consulting company has said.

They are unable to harvest because buyers are not forthcoming.

Lockdown and restriction of interstate movement as a result of the outbreak of Coronavirus (COVID-19) disease have prevented buyers from coming to Fatima’s farm to buy off her watermelons.

“My children went into watermelon production and invested our wet-season rice harvest, 15bags of paddy, one ram and my daily profit generated from petty trading into watermelon farming.

Her expectation was to make much profit that will enable her take care of  immediate needs of the family.

At Damana village in Birnin Kebbi Local Government, Kebbi State, where Fatima lives, watermelon and rice are the most cultivated crops. It takes a watermelon 75 to 95 days to get to maturity from the planting date.

Fatima and other farmers usually plant watermelon three times within a year and they were waiting for their first harvest when the interstate travel ban was imposed.

But against their expectations, they are counting losses.

Trucks from across the country and neighbouring Niger and Benin Republic that often convey their produce to wholesalers, retailers, supermarkets and pharmaceutical companies are no longer in sight and are not likely to return any time soon.

The lockdown measure is worsening food security across Nigeria—disrupting internal supply chains and halting food production. It is feared that the COVID-19 pandemic may shift from being a health crisis to food security crisis.

Fatima says she ended up having nothing from the farm as a result of Covid-19, despite her high hope.

Though the Federal Government exempted trucks supplying food items and other essential needs, truck drivers and other personnel in logistic services fear they may also contract the deadly virus.

This is the reason why many are reluctant to ply the roads.

Muritala Lawal, owner of Islawal Ventures, a truck logistics firm whose trucks carry goods from all over the country says his trucks are all grounded because of the lockdown.

He said even if the trucks are allowed to move, the safety of the drivers and other personnel working with them is paramount.

“We are not too eager to let them go out, the trucks are all parked even when the President said suppliers of food items are exempted from the lockdown,” he said.

According to the World Bank and United Nations, millions of people in Africa are now at the risk of not getting food as a result of  governments’ lockdown orders.

There is a comparatively high demand for watermelon especially  in the Nigerian market but the longer the restrictions stay, the more the loss farmers will incur.

Watermelon is one of the popular and most eaten fruits in the country as most people take it as snack, for health purposes and as diet supplement. It also contains some enzymes that help to fight against cancer, SENCE Agric said.

The World Food Programme (WFP) estimates that the COVID-19 pandemic will see more than a quarter of a billion people suffering acute hunger by the end of the year.

The WFP states that latest numbers indicate the lives and livelihoods of 265 million people in low and middle-income countries will be under severe threat unless swift action is taken to tackle the pandemic, up from a current 135 million.

In a report by the World Economic Forum, Muhammed Sabo Nanono, Nigeria’s Minister of Agriculture, said there is an imminent problem of food insecurity, not only in Nigeria, but also in nations all over the world.

Like Fatima, Dammu Labbo said farmers in the village are stranded as a result of COVID-19.

Standing on her farm as ripe rotten watermelon lay everywhere, she said, “My children’s farm produce is no longer selling and they invested all we had into watermelon production.

Nanono said the Federal Government was creating ID cards for those in the agriculture sector, from farm hands to food truck drivers, to enable them to move freely.

He said the government was taking steps to make sure farmers, millers and marketers could operate. The agriculture ministry is working to increase locally produced fertilizers, while the central bank would look to expand financing for farmers, he added.

Of these farmers, Umar Kalo who has been cultivating watermelon for the past five years quantifies his loss more numerically. After selling two bulls he had reared over the years, Kalo said he invested all the proceeds including sales from his rice paddy, into watermelon farming.

He had hoped to rake in gain in the region of N1.5million to N2 million, but a distraught Kalo disclosed that he realized a paltry N50, 000 at the end due to the pandemic COVID-19 outbreak.

“The buyers are no longer coming to buy our product, now our product ended up wasted which put us into a serious, terrible and devastated situation,” he said.

With this current situation, Kalo is appealing to the government to come to their aid.

But Abubakar Maiyaki, Damana village head, says he cannot estimate the level of the loss his people have suffered as a result of the restriction of movement that prevented buyers from getting to the village.

“Most of our people are watermelon farmers,” said Maiyaki, whose farm produce is also wasting away.

According to him, his people invested a lot of their resources into farming of watermelon because it has been a lucrative crop for them over the years.

When they were about to start harvesting and offer their watermelon for sale, this COVID-19 pandemic struck, he said.

This, he added, scattered the whole process because the buyers are no longer coming to buy.

“As you can see our watermelons have rotten and I cannot estimate the level of our loss,” said a visibly sad Maiyaki.

Farmers are struggling to feed themselves, can no longer save— Oxfam field officer

Putting the losses in context, Abubakar  Giro, a Field Officer at Oxfam Kebbi office says the farmers who are members of Village Savings and Loan Association (VSLA), an initiative introduced by the humanitarian organisation to help smallholder farmers save and obtain loans, are now finding it difficult to feed themselves and their families.

“The farmer cannot quantify or estimate their loss because all their produce is spoiled,” says Giro in an interview.

He disclosed that the farmers were about to embark on the first harvest when the novel virus pandemic broke out, because according to him, watermelon is planted three times in a year in Northern Nigeria assisted by irrigation.

In each of the harvest periods, depending on the size of the farm, Giro explained that farmers realise as much as 2000 pieces of watermelon on a plot of farmland.

“They normally sell in batches. What they call one batch of watermelon is 100 pieces of watermelon,” he stated.

Giro whose duties include interacting with the farmers on sensitisation further sheds light on the economic importance of watermelon. He says if a farmer invests a minimum of N100, 000, he or she normally gets between N400, 000 to N500, 000.

“The irony, however, is that the farmers were about to embark on the first harvest when the restriction of movements was imposed. That is their major challenge, they were about to harvest and this COVID-19 thing came.”

“These elderly women are the ones that are giving their children money to buy seedlings, pesticide and go into the farm. Now people are struggling to feed themselves, they cannot even think of saving.”

If the lockdown is not eased to allow buyers to get to farmers of perishable farm produce such as tomatoes, onions and watermelon, it would worsen their poverty situation in the immediate to medium term and in the long term, it would take them far below poverty line.

Olumide Ojo, Resilience and Private Sector Engagement Programme Manager for Oxfam in Nigeria said the development organisation would continue to engage government and amplify the impacts the lockdown is having on smallholder rural farmers.

“It is not within our mandate to challenge government to do what it doesn’t feel like doing,” Ojo said.

“What we can only do is to provide contrary evidence against a particular policy of government.”

He emphasised also that aftermath of the lockdown will be worse if agricultural production is suspended.

As members of VSLA, majority of the farmers took loans to cultivate their farms and as Ojo said, “what it means for the country immediately after COVID-19 is that these people would have run into debts.”

“Majority of them borrowed money to go into production, they produced, they harvested and there is nowhere to sell. So they would have sunk into more debts.”

As the COVID-19 continues to ravage the country, the farmers’ capacity to continue to produce food would have been greatly weaken which ultimately makes the situation worse off for the citizens.

When this happens, Ojo says, “there won’t be food from the farmers and the farmers themselves would be coping with tough situation of food insecurity and malnutrition, diseases would become more widespread.”

“The socio-economic impact is daunting.”

Market can come to the farmers despite lockdown

It is not completely gloomy for watermelon and other perishable fruits farmers, as those whose produce are yet to reach harvest stage can have off-takers coming over despite the restriction of movement.

People can still grow watermelon, private sector off-takers have the muscle to negotiate with government and security agencies to go to the field and collect these watermelon, said Ojo.

“So farmers are not waiting to transport their produce, but the market itself can come to them. It could be that strategic; Oxfam representing the development partners, private sector players, government and media need to work together to mitigate an unpleasant aftermath of the pandemic,” Ojo said.

He stated that Oxfam will continue to support farmers with knowledge and linkages to market especially by facilitating the creation of Adhoc market, aggregation market that can be mobilised to aggregate produce from the farms and then be able to transport it.

“So as we facilitate the creation of local aggregators, we link the farmers to these aggregators.”

“We will also speak to government to facilitate movement of these produce by these aggregators from the point of production to the point where they are needed for consumption so that the supply chain will not be completely broken down.”

No bank in Nigeria shall retrench staff of any cadre – CBN