Restructuring was not in APC’s manifesto ― Bisi Akande 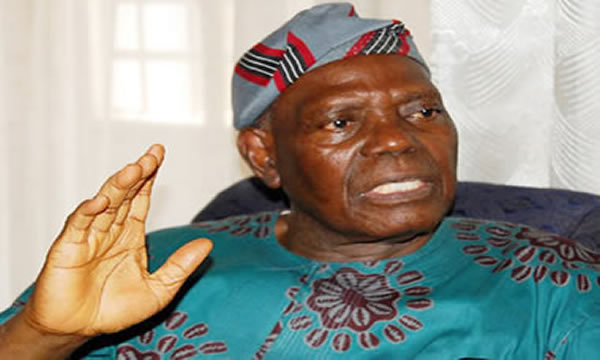 
BIS Akande, former interim National Chairman of the All Progressives Congress (APC) has said that the party did not write restructuring in its manifesto but was rather talking about devolution of power when seeking votes from Nigerians.

“Until when what is now being termed ‘restructuring’ is aggregatively defined by Nigeria, it will remain a mere political slogan,” said Akande in an interview with the Vanguard, saying that the party is already trying its best in achieving that.

“APC did not write restructuring in its manifesto. APC was talking about ‘devolution of power’ and its government has been trying just to do that.”

The former governor of Osun State explained further that President Muhammadu Buhari is working hard in achieving the devolution of power, noting that the idea of community policing is an example.

“For example, Buhari’s government approved that 10, 000 policemen be recruited and spread equally from among the indigenes of each local government to be trained and retained in their native places for the purpose of community policing,” Akande said.

He said power devolution too has to be gradually managed, in order for it not to lead Nigeria into chaos and collapse, adding that it stems beyond what any political party can to handle.

Also speaking on the crisis rocking the APC, the octogenarian said he has  read about 170 memorandums of grievances from members across the country and discovered that all points of complaints are normal happenings among competitors within political parties’ structures in all democracies all over the world.

“APC is a human organization like any other human arrangements among which disagreements are normal phenomenon.

“As the Chairman of the party’s national reconciliation committee, I have read about one 170 memorandums of grievances from members across the country,” he said.

Akande also said those who are expressing disappointments in Buhari’s administration are his opponents, who are using mere propaganda to attack the president’s administration.

“Those who are expressing disappointment at Buhari’s way of handling the country’s affairs are led by his vocal political opponents who are using mere political propaganda to indoctrinate the society against Buhari’s government.”

He, however has been absent from the political scene for quite some time now because of old age, saying there is little he can do at 82.

“For reasons of old age at 82, I am not as ambulant as before in political activities.”

Recession: SERAP asks Buhari to cut cost of governance, not…

Restructuring: Only the blind would say things are working…