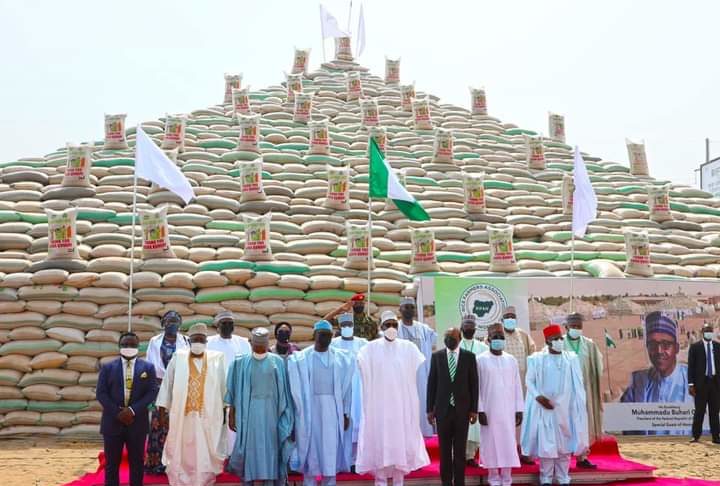 The president gave this information in Abuja at the unveiling of mega rice pyramid of the Rice Farmers Association of Nigeria.

The president said his administration would continue to support the Central Bank of Nigeria (CBN) in incentivising farmers to ensure sufficiency.

“When we assumed the reigns of leadership of this country in 2015, the administration identified the Anchor Borrowers Programme as an essential instrument for achieving economic diversification through agriculture.

“The Anchor Borrowers Programme was designed to encourage programmes in agriculture and to empower smallholder farmers as drivers of transformation in agricultural sector and improve yield per hectare.

“In fact, the programme speaks loud and has increased access to finance for rural farmers, who before now were virtually excluded from the financial system,” the president said.

The pyramid is aimed at showcasing the government efforts aimed at boosting self-sufficiency in rice production, Buhari said.

Latest report from the National Bureau of Statistics (NBS) office shows that inflation is currently 15.63 per cent. Analysts say the figure is largely fuelled by insecurity in Nigeria’s food basket, with rice also affected.

Speaking on the sidelines of the event , Vice President of the Rice Farmers Association of Nigeria  Emmanuel Anoh linked the rising price of rice in the market to the activities of the middlemen.

He expressed optimism that price of rice would be affordable to Nigerians following numerous  government’s intervention.

*In one hectare, the farmers now get 100 bags of rice because of improved of seedlings and support from the Central Bank of Nigeria.”

The claim, however, is taken with a pinch of salt given low productivity complaints of farmers across Nigeria.

A lawyer and social critic Sam Amadi, who spoke on the sidelines of the programme, said the government must explore opportunities in the project to grow the rural economy.

Amadi further stated that the critical thing was access of finance to farmers which the Central Bank of Nigeria was currently helping to fill. “Another key aspect is access to extension services where they learn the use of technology,” he noted.

“This is how agricultural economies are mainstreamed into the larger economic leverages to move from agro rural agriculture to agro-processing and agribusiness and manufacturing.

“If we see this kind of transition, it will not end in Central Bank of Nigeria giving out funds but creating billionaires and ensuring the farmers who transit to agro business become part of the industrial revolution.”

Speaking further at the event,  Managing Director/Chief Executive Officer of Unity Bank Tomi Somefun, while going down the memory lane regarding the support of the rice farmers by the bank since the inception of the Anchor Borrowers Programme (ABP), commended the rice farmers for their partnership with the bank.

“Our strategic partnership with RIFAN started in 2018 when we financed about 273,000 smallholder farmers. This was the largest single-ticket transaction in that year. This financing cut across 33 states of the Federation including the FCT.

“In 2019, the bank increased the tally by financing another 146,810 smallholder farmers for the wet and dry season farming. This funding cut across 35 States of the Federation including the Federal Capital Territory (FCT).

“Additional funding was granted to finance additional 221,450 smallholder farmers of the association across the 32 states of the federation, including the FCT, for the wet season and additional 300,000 hectares was financed in 16 states for the 2020 dry season cropping season.

Official reports show that the average capacity utilisation per annum of domestic integrated rice mills has jumped to 90 per cent, from the 30 per cent that was the case in the era preceding the advent of the ABP.

Government statistics shows that there has been  reduction in the country’s rice import bill, from a monstrous $1.05 billion prior to November 2015 to the current figure of $18.50 million annually. The programme has also created an estimated 12.3 million direct and indirect jobs across the different value chains and food belts of the country.

However, many farmers recently  interviewed by The ICIR said they did not receive any support from the government and were not aware of government’s ABP scheme.