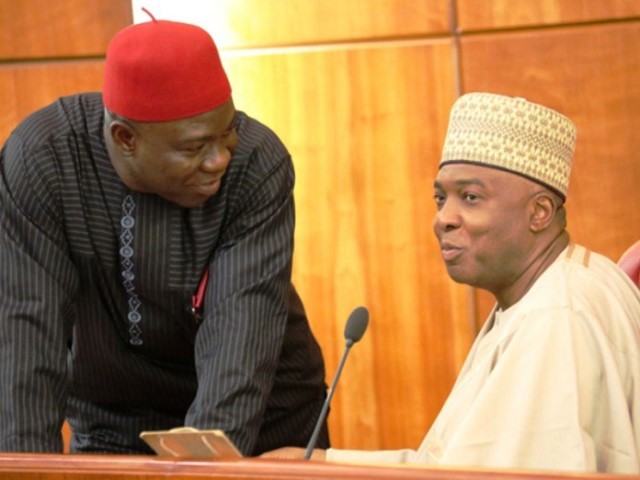 The trial of Senate President, Bukola Saraki, for alleged forgery was stalled on Wednesday, as the prosecution counsel, Aliyu Umar, said he had not prepared a response to a fresh motion by the defendants challenging the jurisdiction of the court.

Umar is prosecuting the case on behalf of the Attorney General of the Federal, Abubakar Malami.

Recall that Saraki, his Deputy, Ike Ekweremadu, and two others were arraigned by the federal government on the allegation of forgery of the Senate standing rules used in the election of principal officers of the senate in June 2015.

The case had been adjourned  till September 28 due to the annual vacation of the judiciary.

But when proceedings resumed on Wednesday, the prosecution counsel told the court that he had just received a fresh motion from the defendants challenging the jurisdiction of the court in respect of the charges against them and asking that the case be dismissed.

He noted that the matter has to do with the fundamental right of parties to fair hearing, and he needs to properly prepare his response to the motion.

Umar said: “Just now I became aware of a motion by the first defendant and served on us on September 26.

“The motion is fundamental because it is asking your lordship to decline jurisdiction and quash the charges. It is a short notice.

“I have not filed anything? It is fundamental to fair hearing. Under the circumstances, I will ask for an adjournment to enable me to respond to the motion,” he said.

Mahmud Magaji, counsel to one of the accused persons, however, objected the application for adjournment.

He stated that the office of the Attorney-General, which is the chief prosecuting counsel, was served the motion months ago and had all the opportunities to respond to the applications.

“The act of prosecution is serious business, especially in a criminal charge.

“I urge your lordship not to allow us to descend to the internal working of the prosecution. In view of this, I’m objecting to the application for adjournment,” he said.

Also, Counsel to Saraki, Paul Erokoro, asked the court to refuse the prayers of the prosecution, describing it as lacking in merit.

“On behalf of the third defendant I submit that the application has no merit.

“If the Attorney-General has not deemed it fit to pass the entire case file to the counsel, then we should be allowed to move our motion. We are ready to proceed,” Erokoro said.

The trial judge, Yusuf Haliru, adjourned the matter till October 7.