Senator Ekweremadu, Hunkuyi, and minister of national planning make list of Nigerians who own luxury properties in Dubai 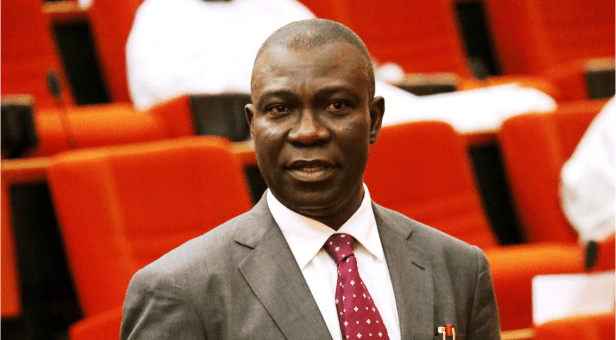 The list of Dubai property owners obtained by The ICIR from the Center for Advanced Defense Studies (C4ADS), a US-based nonprofit organisation, has thrown up name of one of Nigeria’s longest-serving senators, Ike Ekweremadu; former Senator  Suleiman Hunkuyi; minister of state for budget and national planning, Clement  Ikanade Agba and his son, Bennet Ikanade Agba.

Nigerians, particularly the politically exposed Nigerians, own over 800 properties in Dubai, a city designated as one of the havens for ill-gotten wealth, according to C4ADS.

The ICIR had earlier reported how William Fowler, a former Chairman of the Federal Inland Revenue Service (FIRS), Tukur Buratai the immediate past Chief of Army Staff (COAS); Mbu Joseph Mbu, a retired Assistant Inspector-General of Police (AIG) made the list of politically exposed Nigerians owning properties in Dubai.

Ike Ekweremadu, one of Nigeria’s longest-serving senator and three-time deputy president of the senate, is linked to seven properties in Dubai, a city described as a ‘Money Laundering Paradise’ due to the heavy flow of illicit funds into the city which is one of the seven emirates of UAE.

The ICIR record shows that Ekweremadu, a Nigerian politician and lawyer from Enugu State who has been serving in the Senate of Nigeria since May 2003, owns seven choice apartments in Dubai.

Two of the flats, which are a bedroom flat each owned by Ekweremadu are located at The Signature-Burj Down, just adjacent to the Dubai Mall, the largest shopping center in the world. The flats are 12A07 and 608.

He also has a bedroom flat with flat number 3901 at The Address Boulevard, and another flat on the second floor of Meadow 2

Ekweremadu also owns a bedroom flat on the second floor of TLMAEEN-V-148, including a one-bedroom flat with flat number 115 at Emirates Garden and a single bedroom flat located at the Burj Lake Hotel―The address downtown.

In 2018, Ekweremadu was charged to court over a corruption case when the Federal Government sought an interim order to seize 22 properties/assets belonging to him that were located in London, Dubai, Florida and Abuja.

Justice Binta Nyako of the Federal High Court in Abuja, in February 2020, later struck out the case.

Calls and messages sent to Ekweremadu’s mobile number by The ICIR did not go through.

The ICIR reached out also Uche Anichukwu, media aide to Ike Ekweremadu, who did not deny the fact that his principal owned seven apartments in Dubai. He instead said Ekweremadu has declared his properties before the Code of Conduct Bureau, CCB.

“The important thing is for a public officer to declare his or her assets every four years as constitutionally required. This, the Senator has duly complied with. So, you can always cross-check with the Code of Conduct Bureau,” says Anichukwu 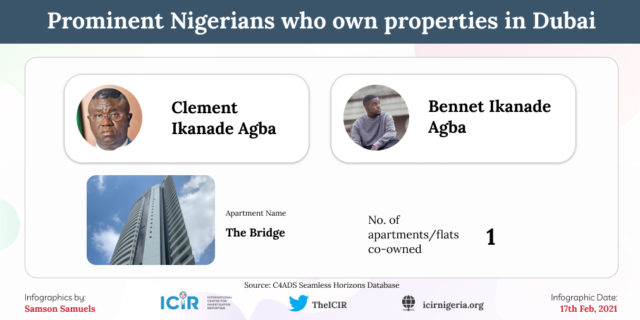 Also on the list of politically exposed Nigerians owning properties in Dubai, United Arab Emirate (UAE) is Clement Ikanade Agba, the minister of state for budget and national planning and his son, Bennet Ikanade Agba.

The minister and his son co-owned an apartment at The Bridge in Dubai Sports City.

Until his appointment as minister Clement Agba served as the commissioner in the Edo State ministry of environment and public Utilities from January 23, 2009, to July 25, 2010.

On July 26th, 2010, Agba was appointed as the commissioner of lands, survey & housing in Edo State before being redeployed to the ministry of environment & public utilities on December 2, 2010.

Agba resigned from his position in 2012 and returned to Chevron Oil, where he had been given a leave of absence.

In 2019, he was appointed as minister of state for budget and national planning by President Muhammadu Buhari.

Bennet Ikanade Agba, one of his four children, is a music producer, who studied Economics at the University College, London (UCL). 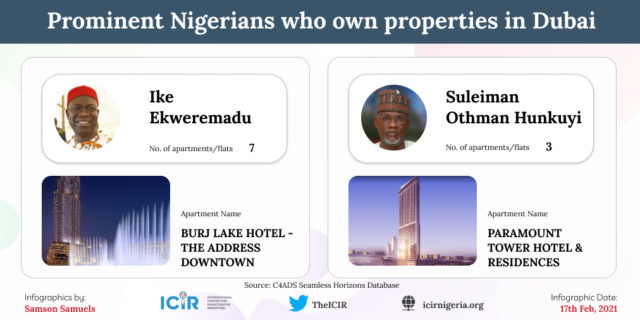 Hunkunyi is a former senator, who represented the Kaduna North Senatorial District between 2015 and 2019.

Prior to the 2015 general election, Hunkuyi served as deputy national organising secretary of the All Progressive Congress (APC) as well as chairman, campaign council in Kaduna State in 2015.

Under the same platform, he served as a senator representing Kaduna North Senatorial District in the National Assembly before decamping to PDP in 2019.

In 2018, the Nigerian police invited Hunkuyi and the chairman of the Nigeria Labour Congress, Kaduna State chapter, Adamu Ango for questioning in connection with a N369 million failed project.

Calls and messages sent to Hunkuyi ‘s mobile number by The ICIR were not going through till the time of this publication.