Soludo decries delay in voting due to BVAS failure 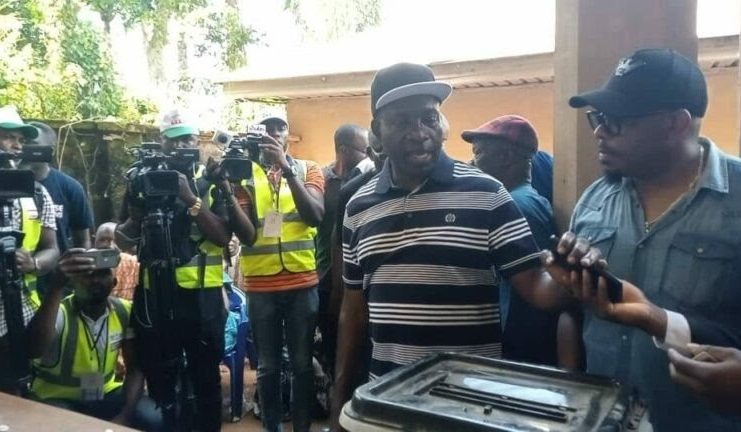 GOVERNORSHIP candidate of the All Progressives Grand Alliance (APGA) in Anambra state Charles Soludo decried the delay in voting as he was unable to vote until past five o’clock due to the failure of the Bimodal Voter Accreditation System (BVAS).

Speaking with reporters at polling unit 002 of the Isuofia ward, Soludo stated that only about 20 people had been able to vote out of over 700 voters who turned up this morning.

“I have been here since eleven-thirty this morning to cast my vote, but up till now, I have not been able to do that.

“You can see the crowd in here; I understand that over 700 of them that were here since seven-thirty this morning to cast their votes, maybe about 20 have been able to do so up until this hour which is about 4.00 PM, the close of voting,” he said.

He noted that some of the voters had already left the unit due to the delay, though others had patiently waited behind, including the aged.

“These elderly women, some of them in their seventies, some in their eighties, have been here since morning. They can’t get to vote. Several have left; I’ve seen hundreds of them walk home because, of course, they can’t sit here all day,” he said.

He noted that the situation in the unit, obtained across Isuofia and other areas of the state, as they also experienced challenges with voting due to failure of the BVAS.

He, however, noted that the Independent National Electoral Commission (INEC) had extended voting time in units that experienced challenges such as his.

“I’ve just seen the release by the INEC resident electoral commissioner talking about the extension, namely that if you’re here by 4.00 PM, you will still be allowed to cast your vote. That’s fair enough.

“There is also implicit in it- my understanding- that there is a possibility of extending the voting time through to tomorrow. And I want to believe that this is one of those places where the voting time must be extended,” he said.

The ICIR had reported that INEC extended the voting period of the election to 4.00 PM.

This extension resulted from the failure of the BVAS in many parts of the state and applied to areas where polling units opened after the commencement period of 8.30 AM.

NIGERIA's small and medium enterprises are in for more difficulty in access to finance...
Advertisement