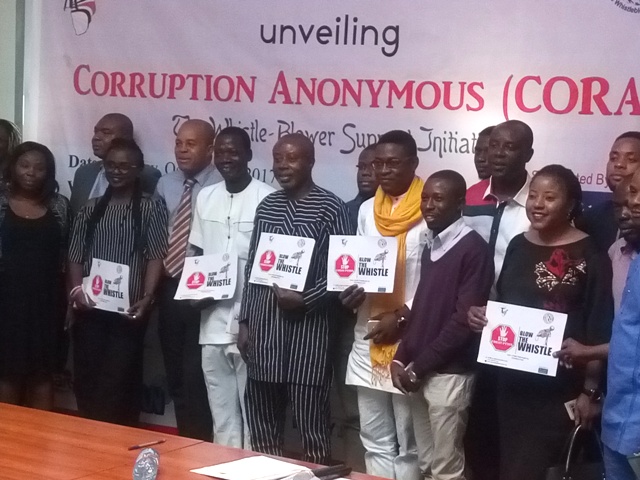 I crave your indulgence to preface this speech by reiterating what all of us already know: that corruption is the number one enemy of our country, and, therefore, the main reason Nigeria remains underdeveloped. It is generally agreed that corruption is the canker that is destroying the foundation of our society and that if no drastic measures are taken to deal with it, we would, very soon, have no country to speak of.

At the African Centre for Media and Information Literacy (AFRICMIL), a not-for-profit organization dedicated to advancing media and information literacy, training and advocacy, as well as promoting accountability and good governance, we have for long been deeply worried by the growing damaging effects of corruption in the country.

As a civil society organization, it is our belief that we can play a vital role in challenging the unremitting incidence of corruption in Nigeria. And we see in the whistle-blower policy of the federal government the opportunity to weigh in in a more significant way in our earnest desire for a corruption-free society. This was the thinking that went into the robust intervention we have tagged Corruption Anonymous (CORA), a project supported by the MacArthur Foundation.

Perhaps, not many of us realize that we have a constitutional duty to provide information or help law enforcement agencies in the discharge of their duties. The Nigerian Constitution enjoins every citizen in Section 24(d) to make positive and useful contribution to the advancement, progress and well-being of the community where he or she resides; and in Section 24(e) to render assistance to appropriate and lawful agencies in the maintenance of law and order.

AFRICMIL believes that government on its own cannot win the war against corruption without the input of the citizens. Corruption Anonymous is, therefore, focused on mobilizing citizens as the critical factor of success in the anti-corruption campaign through whistleblowing.

Corruption Anonymous seeks to do three basic things (1) to build confidence and support for the whistleblower initiative of the federal government; (2) advocate for proper implementation of the policy, and institutionalization of the guidelines; (3) reinforce the safety and protection of citizens who dare to blow the whistle on acts of corruption. But Corruption Anonymous will do more. Apart from serving as a platform for citizens to engage in whistleblowing and interrogating the workings of the whistle-blower policy, CORA would provide the tools for the media to enhance its investigative work.

To achieve its goal of popularizing whistleblowing and making Nigerians see the need to adopt it as a strategic tool for reducing corruption, AFRICMIL has lined up a series of activities some of which include the public launch of CORA, creating awareness through media and civil society engagements, stakeholders’ forum and periodic training for agencies of government, as well as a series of focused public education in cities across the six zones of the country.

So far for the whistleblower policy, it is safe to say it has been a success. Whistleblowing has added a fresh impetus to the anti-graft war. In less than a year of its inauguration, it has led to the recovery of staggering amounts of looted funds, thus proving to be an effective and reliable mechanism for combating the one singular vice that seems to have permanently arrested the development of Nigeria since independence.

As of June 2017, N11.6bn had been recovered and about N375.8m paid to 20 whistleblowers. Going by figures available to AFRICMIL courtesy of the Presidential Advisory Committee Against Corruption (PACAC), by June 5, 2017, total communications received by the Federal Ministry of Finance, which is the implementer of the policy, was 2,150. Of these, 128 came through the Ministry’s website that receives reports (www.whistle.finance.gov.org); 1,192 was through phone calls (08098067946); 540 through SMS and 290 by Email ([email protected]).

Total number of tips received was 337, out of which 29 was classified and 308 unclassified. 53 of these tips came through phone calls, 105 through SMS, 120 through the website and 59 through Email. 205 tips from 205 agencies were classified as actionable. Within two months, by the middle of August, total communications received by the Ministry of Finance through the various channels rose from 2,150 to 5000, representing 43% increase, while actionable tips jumped from 205 to 365, representing 56.2% increase. More than half of the actionable tips received, according to the Minister of Finance, Mrs. Kemi Adeosun, were from public servants.

But AFRICMIL believe a lot still needs to be done. In about nine months of its engagement with the whistleblower policy, it has noted three issues that should be of great concern to well-meaning citizens as they pose serious threat to the survival of whistleblowing in Nigeria.

One is the lack of awareness of the whistle-blower policy. Take a walk around town and ask Nigerians, chances are that nine out of ten would not have heard about the policy much less have any idea of how to submit tips. The second is the glaring absence of commitment to the safety and protection of whistleblowers. Unfortunately, as we have observed, public servants face one form of victimization or the other for disclosing wrongdoings in their various offices. And finally, the refusal, in most cases, of anti-corruption agencies to act diligently on reports made to them by whistleblowers. Most of those who are reported are often left to walk free and never invited for questioning, much less suspended from office as the public service rules recommend.

But for the role of AFRICMIL and that of other civil society groups and the media, an Assistant Director in the Ministry of Foreign Affairs, Mr. Ntia Thompson, who was unjustly sacked for reporting fraud in his department, would not have been reinstated. And when he was recalled, Thompson, who was head of Servicom, was redeployed to the library. Presently, Corruption Anonymous is engaging the Minister of Power, Works and Housing, Mr. Babatunde Fashola, whose office supervises the Federal Mortgage Bank of Nigeria, on the case of Mr. Murtala Ibrahim of the audit department of the bank who was sacked on May 8, 2017, for also blowing the whistle on fraud in the bank.

We can’t emphasize enough the fact that whistleblowing can only make the desired impact and survive if whistleblowers enjoy full protection from persecutions of any kind, and those against whom reports are made are punished for their crime. So, it is important, going forward, that the usual fear nursed by potential whistle-blowers that their safety may be compromised, or that they could be short-changed (where there is a recovery) and officials in the agency responsible for managing and implementing the policy may undermine the rules of the system, among other things, is addressed.

In conclusion, I wish to observe that the whistle-blower policy is one of the significant things that have happened to the fight against corruption in our country. We hope we can all lend it our maximum support and encourage our fellow citizens to blow the whistle to reduce corruption to its barest minimum in our country.

Onumah is coordinator, African Centre for Media and Information Literacy. He gave this speech at the unveiling of Corruption Anonymous (CORA), the civil society whistleblower support initiative, October 12, 2017.

IGP begs court to stop Senate from investigating him

Kachikwu: My memo to Buhari was misunderstood, Baru and I are working together

Between el-Rufai and labour

OPINION: Who will take over in Nigeria?