Infographics and Data Reports
By Editorial On Jul 19, 2020 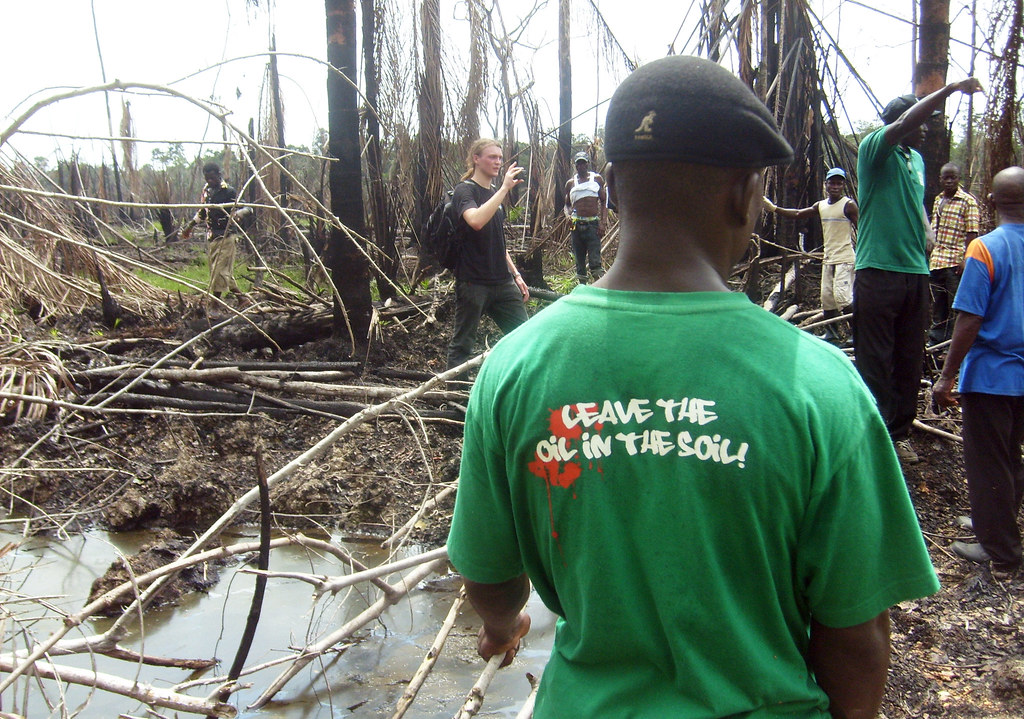 LESSON for Americans in the age of Black Lives Matter, from the Niger Delta’s long struggle for environmental justice.

In June 2020, the Trump administration, using the COVID-19 pandemic as an excuse, began to accelerate the rollback of major environmental regulations in the United States. On June 5, Trump signed an executive order aimed at weakening the National Environmental Policy Act, reducing the effectiveness of the Clean Air Act and effectively opening the door for more pollution in the country. The Executive Order accelerates the construction of pipelines and other energy projects without consideration for environmental impact assessments.

This new weakening of environmental regulations comes in the wake of many such executive orders, often targeted at weakening protections not only for the environment but blacks and people of color who live in many communities often affected by environmental pollution.

The Trump administration’s disregard for the environment was not new—in 2018, climate scientists, environmentalists and close watchers of the oil industry were once again reminded of the dangers of the Trump presidency to climate concerns when the then Interior Secretary, Ryan Zinke, proposed a vast expansion of oil drilling in the Pacific, Atlantic and Arctic oceans—ending many years of moratoriums on oil drilling in these sites. This followed similar actions regarding the opening up of sacred sites and sites of national monuments to drilling and mining activities across the US. Sites such as The Arctic National Wildlife Refuge (ANWR) in Alaska and others are part of this drilling everywhere initiative. Recently, I’ve been pondering over three interrelated issues—the current protests against the incessant murder of blacks in the US, the Dakota Access Pipelines, and the oil rich Niger Delta region of Nigeria.

These three issues speak to the ways in which blacks and people of color, especially Native Americans in North Dakota, continue to bear the brunt of environmental disasters created by big corporations with the help of policies by the Trump administration the same way that the oil corporations shape policies in Nigeria through their alliance with the Nigerian government. The Black Lives Matter movement is not just about police brutality, but also the brutality daily perpetrated on the environment in which they all live across the world. From the swampy oil polluted Niger Delta in Nigeria to the neglected and polluted environment in the city of Detroit and the poisoned water in Flint, Michigan—the imprint of neglect and abandonment by our governments in favor of big corporations has made the environment where black and people of color live one of the most unbearable in the world.

Today, environmental pollution which disproportionately affects black people continues to be one of the most pressing realities of our time. For example, for over 50 years, oil-related contamination has been a constant reality for the people of the Niger Delta who experience regular oil spills, preponderance of acid rain as a result of gas flaring and other activities of oil corporations. As activists in North Dakota continue to protest the controversial Dakota Access Pipeline (DAPL), police brutality, and other forms of injustices against blacks and people of color in the US continue. There is a connection between the struggles for environmental justice in Nigeria, the protests led by the people of Sioux Rock, and those organized by Black Lives Matter.

Beginning in 1956, when the first oil consignment was shipped to the international market, the economy of the Niger Delta has shifted away from agriculture to become defined by oil production. At the center of this significant change are the people of the Niger Delta, whose lives, livelihoods, and cultural practices depend on the lands and waters where oil is extracted. Displacement from traditional livelihoods, the destruction of sacred sites, and the pollution of the environment have resulted in many years of protests and sometimes armed struggle. The 12-day revolution led by Isaac Adaka Boro in the 1960s marked the beginning of a long and protracted fight for recognition by the people of the Niger Delta. Non-violent protest groups formed, such as the Movement for the Survival of Ogoni People (MOSOP). In 1995, Ken Saro Wiwa, the leader of MOSOP and a renowned international playwright, was killed by the Nigerian State after standing up to Shell and other multinational oil corporations. By 2005, new movements emerged, such as the Movement for Emancipation of the Niger Delta (MEND). This violent insurgency group claimed to represent the interests of all Niger Delta people in their struggle against corporations and the Nigerian state. The insurgency still continues today, though on a smaller scale, mostly overshadowed by the Boko Haram insurgency in the northeast of Nigeria. Insurgency in the Niger Delta is today largely mitigated by monthly “amnesty payments” to former insurgents by the Federal Government of Nigeria.

Meanwhile, protesters against the DAPL in the US assert that the pipeline would damage sacred land and pollute the water supply to the Standing Rock Sioux tribe and other downstream communities, just like how many years of oil exploration has rendered the entire Niger Delta region disastrous. For the Black Lives Matter movement and its allies, it is not just about police brutality but also about systemic racism in education, housing, clean water, and a livable environment devoid of pollution—a right to restored land, clean air, clean water and housing and an end to the exploitative privatization of natural resources. For the BLM, the Sioux Tribe, and the Niger Delta communities, land and water are central not only for physical survival, but also for cultural survival. Any arrangement that denies them access to these important resources can lead to loss of livelihood, destruction of sacred sites, and disruption of cultural practices that are vital to community identity.

Denial of access to sacred sites, water (in Detroit and Flint), clean air, and areas of cultural importance is a grave violence whose impact on communities cannot be overemphasized. For example, some of the sacred places threatened by the DAPL are cemeteries where the ancestors of the Sioux tribe are buried. Clearing these cemeteries to make way for oil pipelines will completely erase the connection that the community has to its history.

In my many years of work in the Niger Delta region, I have witnessed firsthand the devastating effects that oil exploration has had on entire communities. I will never forget my work in Ogoniland, a region of the Niger Delta home to the indigenous Ogoni people. In 2011, the United Nations Environment Program (UNEP) released a report detailing the level of environmental pollution in the area, and estimated that environmental cleanup and restoration could take 30 years and over $30 billion. When I saw the protests in North Dakota and the reaction of the Obama administration to suspend DAPL construction in December 2016, I became hopeful that the Standing Rock Sioux would avoid the horrific environmental conditions that have plagued the Ogonis and other Niger Delta communities for many years.

However, my hope has since turned to anxiety after the Trump administration rapidly began cutting back on environmental regulations. For example, on January 31, 2017, the Army Corps of Engineers announced that it would be granting an easement to allow construction of the DAPL to continue. This followed an executive order issued by Trump calling for construction to recommence.

The Sioux Tribe community was granted a temporary reprieve on March 25, 2020 when a Federal Judge ordered a full environmental review of the pipeline construction. However, the coming months will no doubt prove difficult for the tireless protesters of Standing Rock. Since their first temporary victory in December 2016, many of the protesters have left North Dakota, packing up their tents and returning to their daily lives. Only a few hundred steadfast “Water Warriors” remain in spite of the Trump administration’s intimidation. With the vast expansion of drilling in the Pacific, Atlantic, and Arctic oceans, many communities across the US—from Florida to Alaska—may soon find out that they have many things in common with the Ugbo, Egbema, Bonny island, Oloibiri, and other communities of the Niger Delta—chief among them, a degraded environment.

Omolade Adunbi, an anthropologist from Nigeria, is on the faculty of the University of Michigan.