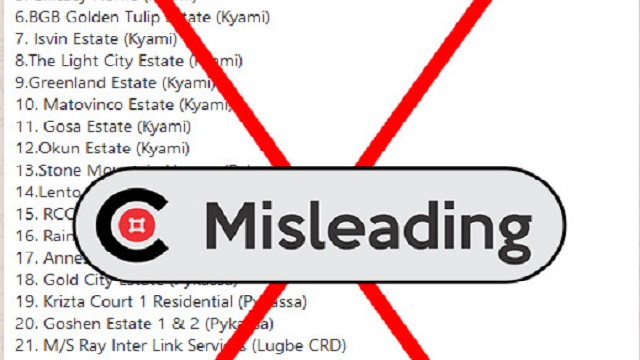 A VIRAL message retrieved from a WhatsApp group on Thursday, September 17, says the Department of Development Control of the Abuja Metropolitan Management Council (AMMC) in the Federal Capital Territory Administration (FCTA) is set to demolish a list of 37 estates in Abuja, Nigeria’s capital.

The post attributed the Development Control Department of the AMMC as the source of the information.

It was also reported by the Nigerian Lawyer, an online publication.

Some of the estates with their locations allegedly marked for demolition include; Ejima Group Estate, Minnanuel Estate, Redwood/Bidmusdruhill, Joafra, Efficacy Home all in Kyami.

That the Development Control Department of the Abuja Metropolitan Management Council (AMMC), an agency of the Federal Capital Territory Administration (FCTA), in 2020 marked 37 Estates for demolition.

Findings show that the news of demolishing the 37 estates was earlier published in October 2012. The Leadership newspaper in a report culled by the AllAfrica news platform announced the plan to demolish structures considered to be illegal.

According to the old report, the announcement came shortly after 500 buildings were pulled down by the FCTA for flouting the Abuja Master Plan.

TheNigerianLawyer.com, in a report it published on September 16, 2020, stated that “The Abuja Metropolitan Management Council (AMMC) has disclosed that it is set to demolish estates built along the Abuja airport road where Federal Government plans to construct a centenary village, according to Bridge News reports on 3rd day of March 2020.”

The Bridge news it referenced with a link-back read;  “The Abuja Metropolitan Management Council (AMMC), on Wednesday said there was no going back on the proposed demolition of 32 illegal estates along the Abuja Airport Road. Speaking recently, Mr. Atebeji Nathaniel, the Assistant Director, Monitoring and Enforcement Department of the council told the News Agency of Nigeria (NAN) in Abuja.”

An online search shows that this report which was published almost verbatim and passed as recent had been reported in 2013 by the Vanguard newspaper.

The FactCheckHub reached out to Ikharo Attah, the Chairman of the FCT Ministerial Task Force Team who debunked the claim. He described the viral WhatsApp message as fake news.

“Fake News. First circulated in 2013,” he responded in a message while verifying the claim.

Mukhtar Galadima, the FCTA Director of Development Control  – the department attributed as the source of the claim in circulation also stated that it was an old event. He told the FactCheckHub that the proposed plan was announced in 2013.

“It is fake news. This is something that happened in 2013. It is false information.”

However, the FCTA, in a  July 2020 report by the Premium Times (an Online newspaper), has suspended the processing and issuance of building plan approvals for Lugbe and all on-going developments in the district.

This was attributed to a statement from The Director, Department of Development Control, Mukhtar Galadima who explained that the suspension had become necessary due to the ongoing harmonisation of developments in the district with the Abuja Master Plan.

Galadima, in the report, said “This is to inform the general public that the Department of Development Control, Abuja Metropolitan Management Council, is not granting building plan approval for developments in Lugbe due to the ongoing harmonisation exercise of the district, in line with the Abuja Master Plan.

“Consequently, any developer found to be developing any property within Lugbe district without the requisite building approvals from the department is doing so at his or her own risk.

“The department will enforce appropriate sanctions, in accordance with the provisions of the law, including demolition of such illegal properties.”

The claim that the Development Control Department of the Abuja Metropolitan Management Council (AMMC) in 2020 marked 37 Estates for demolition is MISLEADING. Although the FCTA announced plans to demolish estates, this was done in 2013 and not 2020 as the WhatsApp claim in circulation alluded.

Atiku denies ICIJ’s corruption report, says he is not under watchlist by the US

‘No scientific evidence yet against consumption of donkey meat’

“We won’t be using your useless airline again…