IN violation of the guideline by Nigeria Centre for Disease Control (NCDC) on COVID-19, voters in the just concluded 2020 Edo gubernatorial election were seen brazenly ignoring social distancing protocol which prescribes a physical distance of at least two metres from one another in public spaces.

Election observers who visited various wards reported how voters clustered together on queues during the voting exercise without regards for the NCDC’s COVID-19 protocol.

At Igueben Idigun ward, in Igueben Local Government Area, LGA, majority of voters who were on the queue neither wore their facemasks nor kept a two-metre distance.

The NCDC had warned in the guideline that for elections to take place, it must be in cognizance of ‘No Mask, No Voting’ policy.

The Independent National Electoral Commission (INEC) had also put up a policy in place with regards to COVID-19 for conducting a safe election.

INEC new guideline on election states that “the rules of physical distancing shall be enforced at all election activities including stakeholder engagements, training, queuing at Polling Units amongst others.”

The guideline also makes the use of face masks compulsory for all involved in the election process.

But Ukpenu Primary School, polling unit 7 in Emuhi/ Ukpenu/ Ujoelen ward of Esan West Local Government Area, while voting was in progress, the voters did not observe the Covid-19 guidelines.

In Esan Central LGA, several polling units that were visited indicated that the use of hand sanitizers and face masks were not considered before voting at Ibore Primary School, Uneah (Ward 1).

The same situation was similar at Uneah ward 3 where voters huddled together as they tried to keep away from the sun heat.

At Ugbowo Primary School, Ward 10, Unit 12, Egor LG, voters while waiting to cast their ballot could be seen milling close to one another in a clear violation of social distancing. 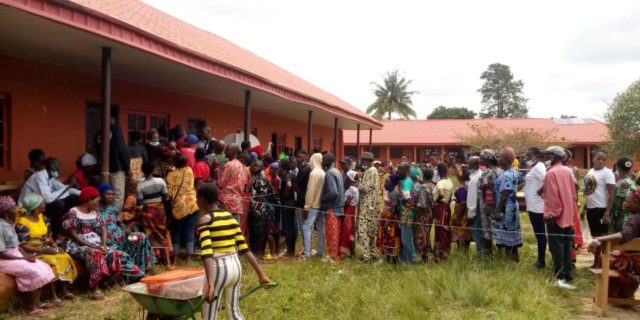 Lagos says it contains Coronavirus better than Italy, Iran and Spain? But that claim…

FACT-CHECK: Claim that NCDC will pay Nigerians to meet…