THE Gombe State government’s website (www.gombestate.gov.ng), is filled with outdated and inaccurate information, long after many changes occur, as findings show.

The website still lists Justice Beatrice Iliya as the acting Chief Judge, sworn in on September 3 , 2019.

Justice Pindiga replaces the former but the state government official website continues to show Justice Beatrice Iliya as the chief judge who heads the state high courts and many other functions assigned to chief Judge after six months.

After adequate findings, this newspaper notes that Justice Saad has retired months ago, but is yet to be updated on the state government official website which may lead to misinforming the readers.

Meanwhile, in the list of high court Justices, two different pictures appeared with the name of Justice Abubakar Jauro in the state government official website. Further findings show that the other person is Justice Saad and has retired last year, 2019. Months later, the state government didn’t update its website.

This newspaper understands that Justice H. A. Barka who is listed amongst the state high court judges has since joined the court of appeal, but the website still parades him as a high court judge.

This is not all. It has been noticed that the state government has made no announcement concerning the coronavirus pandemic in the state. The website seems to be last updated in 2019. Despite the fact that the state has recorded the highest number of confirmed cases on June 14, 2019, the state government’s website is yet to provide any information on the COVID-19 pandemic safety measures and the number of cases recorded. 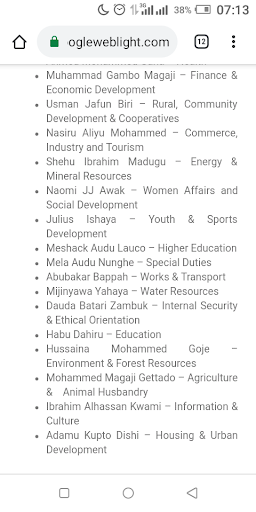 The Gombe state government website was last updated on 9th November 2019, despite the risk of community transmission of the novel coronavirus, which broke out months ago in Wuhan, China, and has since killed fourteen people, with 479 confirmed cases and 215 cases currently on admission in the state.

For the state government, the website was last updated on November 9, 2019.

This newspaper observed that the state government has trimmed the number of state ministries on October 16 2019 from 27 to 21. Despite that, the website still lists 26 ministries.