THE Nigeria Labour Congress (NLC) on Sunday plunged Kaduna state into total darkness to protest the sack of over 4,000 workers by the state government. 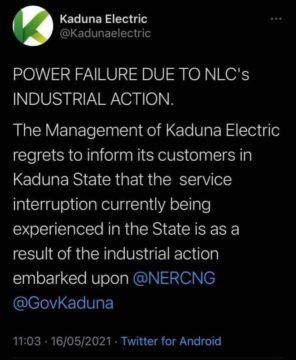 The action is coming amidst the security crisis in the state.

The Nigeria Labour Congress had on May 11 directed all government workers in the state to embark on an indefinite strike to compel the government to rescind the sack.

The workers, through their unions, promptly directed their members to comply with the order in letters seen by The ICIR.

“This action is sequel to the industrial tyranny which has been institutionalized by the Kaduna State governor, Mr Nasir El-Rufai, especially as manifest in the recent mass sack and casualization of over 60 per cent of workers in the Kaduna State civil and public service.

“We write to communicate to all affiliate unions of the Nigeria Labour Congress to fully mobilize their members in Kaduna State for complete and indefinite withdrawal of services until a counter directive is issued by Congress leadership. We also direct all affiliate unions of Congress to mobilize their members in the contiguous state to Kaduna,” the state NLC stated.

Kaduna state government had earlier this year disengaged over 4,000 its workers, citing dwindling revenues and the need to invest in infrastructures and other critical sectors in the state.

The sacked workers were drawn from 23 local government areas of the state; the State Universal Basic Education Board (SUBEB) and the state Primary Health Care Agency.

Governor El-Rufai had said he was not elected to pay salaries, which he claimed was taking nearly 90 per cent of monthly federal allocation accruing to the state.

The ICIR reports that the strike may further worsen security and other socio-economic challenges in the state.

Kaduna State has witnessed increasing banditry and kidnapping in the past months more than any state in Nigeria.

The ICIR had reported in March this year how deaths arising from insecurity were there times higher than what was recorded in the country’s North-East in 2020. Nigeria North-East has been the epicentre of insurgency facing the nation in the past decade.

Reports have also shown how bandits, who are the main causes of insecurity in Kaduna state, killed 323 people and kidnapped 949 others within three months in the state.

Last month, the state government increased tuition for its tertiary institutions of learning by at least over 300 per cent, in a bid to rev its revenues. The decision received stiff opposition from the students and their parents, forcing the government to put the hike on hold.

PETER Obi, a presidential aspirant and former governor of Anambra State, has dumped the...
Advertisement