SMALLHOLDER women farmers’ contributions to food security in Nasarawa State are being threatened by inadequate information and access to critical farm inputs, despite the government ‘s promise to revamping the agricultural sector.

This development is coming amidst the COVID-19 pandemic period which already has caused untold hardship to many Nigerians, including farmers. Yet women farmers are worse hit.

In July 2003, African Union at its ordinary Assembly in Maputo declared that ten per cent budgetary allocation be allocated for agriculture development to ensure food security in the African continent. Fifteen years on, many women farmers are yet to benefit from the policy.

Though, government at all levels expend huge resources in procuring farm inputs and distribute the same to some farmers, but women farmers are hardly able to access the support.

President Buhari-led administration has initiated a number of women-oriented measures such as three-month repayment moratorium for all traderMoni, MarketMoni and FarmerMoni loans, as well as the conditional cash transfer, only a few women among the population have benefited.

However, about one thousand three hundred registered Smallholder Women Farmers Organisation of Nigeria, SWOFON Nasarawa State Chapter, since establishment in 2012 are yet to benefit from this largesse.

Except for the training put together by SWOFON, the farmers said they have not received other supports.

The first port of call was Caroline Peter’s residence in Awe Local Government Area, a hard-working mother of three, struggling with pepper nurseries which she fenced to prevent them from premature death.

The net port of call was Sarah Albert’s residence, a pig farmer who has a unique way of inviting her pigs like herders. The human-animal relationship that exists between her and her animal is what many will refer to as “proof of ownership”. 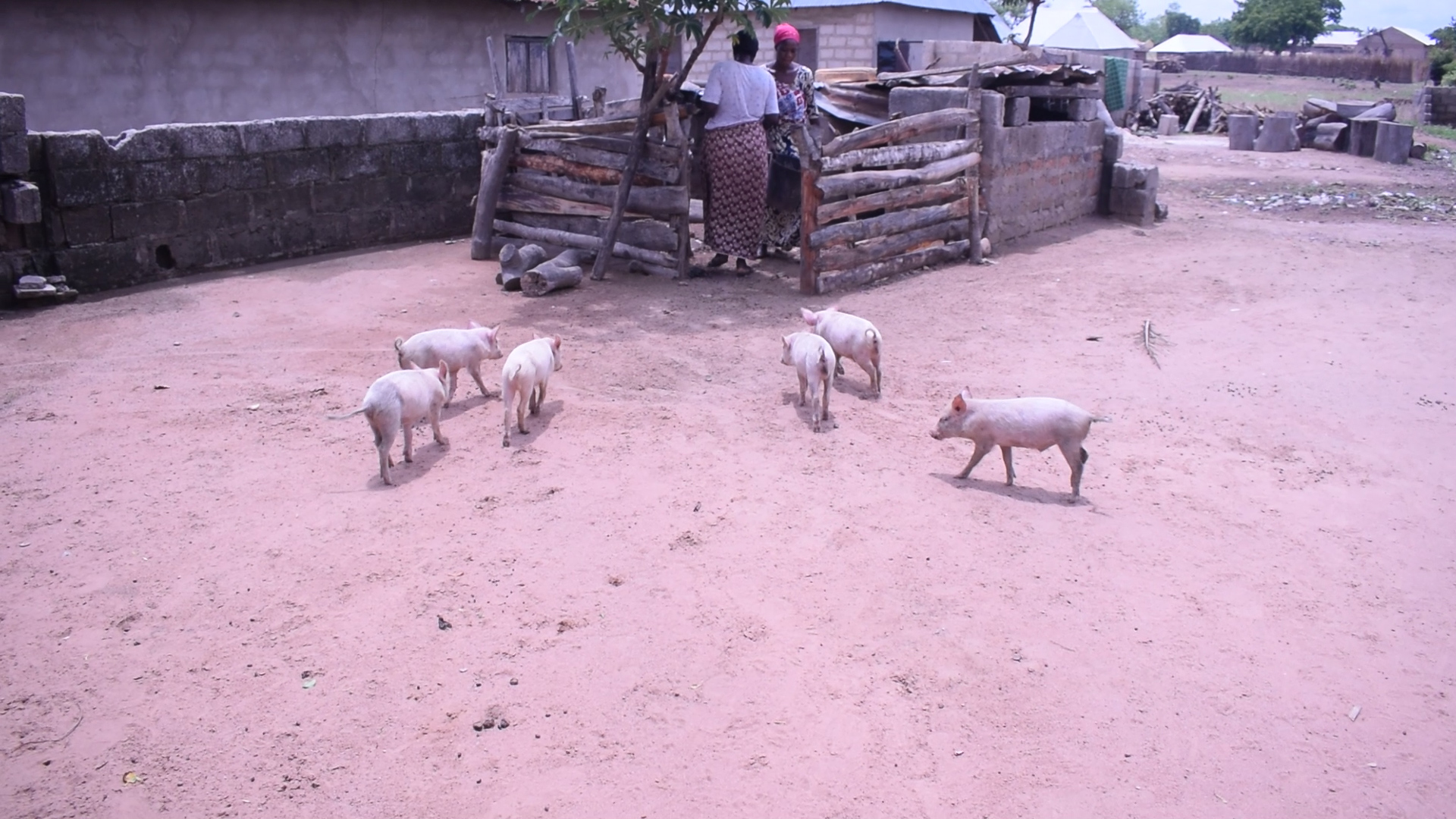 “My challenge with this pig farming is the way people used to kill or injure them whenever they go outside my compound as I can’t afford to keep them in one place due to paucity of funds. Every year I do hire farm to cultivate either rice or other crops. But the price is too exorbitant, one hectare rice farm goes for N50, 000 while the same portion for farming other crops is given at N30,000,” Sarah said.

“We have never benefitted from any of these government farm inputs. If I can get herbicides, fertilizer, and fund, I am sure that will boost my capacity to farm better,” Caroline said.

To locate their hired farms, we took a four kilometre ride to their half-hectare maize, melon, groundnut, rice, soya beans, beneseed and yam farms, each situated at the same location with the expectation that they pay N50, 000 for half-hectare rice farm while another N50, 000 is dolled out for half a hectare to farm other crops, compounding women challenge of access to farmland.

Sarah Shambuwa, another committed smallholder woman farmer in Wamba Local Government Area, is grasping for breath due to lack of access to farmland and inputs, with movement restrictions imposed by the government which effect is biting harder on the household, no thanks to Coronavirus pandemic.

Sarah and her husband Isaiah struggle to feed due to their inability to sell soap and cocoanut oil they produced owing to the locked-down, while their chances to farm this year is very slim.

“N300,000 will change my family story for good and with government support, I can expand my farmland to even three hectares,” Sarah said.

“Even when the government distributes fertilizer we don’t see it. For about three months now we didn’t sell our coconut oil and local soap as a result of the ravaging coronavirus pandemic,” Isaiah said.

In Akwanga Local Government Area, the searchlight was on Lama Elam, a passionate smallholder woman farmer and a mother of three whose cassava, rice, maize, groundnut and guinea corn farms are located along Wamba road, eight kilometres from Akwanga town, lamented the hike in hiring a private tractor for five hours at the rate of N50,000 and regretted the near absence of government-owned mechanised tools in the State.

Lama Elam and her husband Timothy advised families to venture into agriculture despite the challenges, especially now that government is relying on agriculture to grow the economy.

“Another challenge is access to land, we are renting the land we are using this year renewable after every year. So we need funds to buy land and fence it if we have support from the government to acquire land. We use to buy hybrid seeds from ADP at a subsidised rate, but we have no access to fertilizer. What we actually need right now is modern farm tools and funds to take care of labour.

“We lost our crops to herders last year, but plans are on to engage some people to help us watch over the farm to prevent a repeat. In short, we just need support from the government, no amount is too small.”

Juliet Sarki of Kokona Local Government Area is a devoted smallholder woman farmer whose life depends totally on maize, melon, beneseed and groundnut farming to carter for children’s school fees and other upkeeps, harped on her chances to farm this year because of fatal land, lack of access to improved seeds, other farm inputs and funds to support her farming activities at the centre of Coronavirus pandemic.

“If I have been receiving farm inputs, my production capacity would have been better improved. I do contribute to the economy through payment of tax in the market when I go to sell my produce and also pay transport fair. The source of our livelihood depends on this farming and should anything happens to it we are finished, that’s why we are appealing for help in this regard.”

The story in Karu Local Government Area, where Dorothy Katampe, a maize and beans farmer resides, is not impressive considering her inability to farm more than two crops for lack of funds, subsidised mechanized tools, and farm inputs among sundry issues.

However, Dorothy, her husband Akila Katampe and one of their daughters have resorted to rearing rabbits, chicken and palm oil production, all in a bid to cope with the effects of the locked down as well as post-COVID-19 impacts.

“Nobody allocates fertilizer for women. Herbicides and insecticides are very costly. When they are sharing fertilizer, they only give men, they don’t have women in consideration and women are the ones farming in every community.” Dorothy said.

“I appeal to the government to employ extension workers to help guide smallholder farmers in the application of modern technology for food sufficiency,” Akila said

State commissioner for agriculture and water resources, Professor Otaki Alanana said although farm inputs distribution has always been channeled through the Local Government Authorities for onward distribution to target farmers,  the ministry will seek governor’s approval for direct allocation to women groups in future distribution exercise.

“We involve women in all our activities even the World Bank IFAD  project, value chain development programme being implemented in collaboration with federal and state ministries of agriculture, and the focus is on women. Japanese embassy is partnering with Nasarawa State to empower women. Smallholder horticulture empowerment programme is mainly for women to grow spinach, okra, maize, ugu, carbage, carrot during the dry season,” Professor Alanana said.

In all the five local government areas visited, smallholder women farmers shared similar concerns of herders invading their farmlands and insects infestation among others.