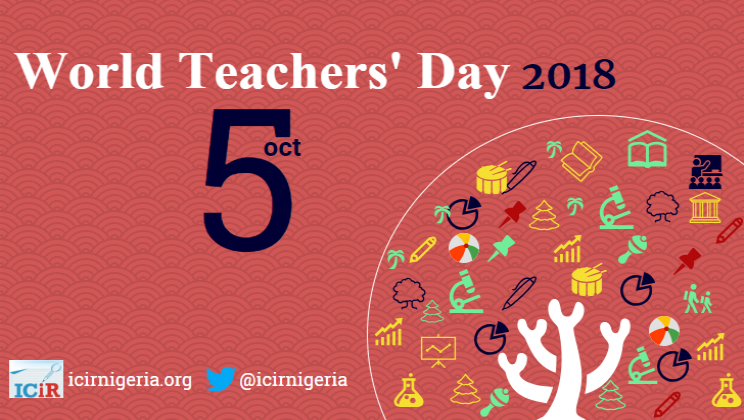 AS the world celebrates Teachers Day, the Nigerian teachers are aggrieved over the non-payment of their salaries.

October 5 of every year has been set aside by the United Nations Educational, Scientific and Cultural Organisation (UNESCO), to celebrate and remind the global community the importance of teachers to nation’s development.

Despite the disbursement of Paris Club loan repayment by the Federal Government, some states governments in Nigeria still owe teachers’ salaries for months.

A document made available to The ICIR by the Public Relations Officer of National Union of Teachers (NUT), Hwande Emmanuel, shows that seven of the 36 states in Nigeria have cut down the teachers’ salary ranging from 20 to 80 per cent cut in salaries.  According to NUT,  some state governments have stopped paying salaries for as long as 11 months.

The teachers who are referred to as the catalysts for the intellectual, socio-economic, scientific, technological growth and development of the society have mostly been receiving half or quarter salaries in Nigeria.

The last time the Benue State government paid the teachers was in November 2017. Approximately 11 months’ salaries have not been given to both primary and secondary teachers in the state.

Similarly, Abia teachers were last paid in March 2018. They have been owed 6 months’ salary.

In Borno, the primary school teachers receive 20 per cent of their monthly salaries, while secondary receive 60 per cent.

The Kogi teachers are being paid 54 per cent of their salaries every month.

In Osun State, payment is based on the grade level. Both primary and secondary teachers of grade level 12 to 17 receive half-salaries (50 per cent), while those in grade level 8 to 10 gets 75 per cent of their salaries.  This mode of paying salaries has existed for more than two years in the state, according to NUT.

Likewise, Plateau State pays teachers 55 per cent of their salaries. Others are Imo and Kwara States which pay 80% while Nasarawa State government have been inconsistent with the percentage of salaries being paid.

Alamu Motunrayo, a primary school teacher in Osun State, told the ICIR that teachers in the state have suffered untold hardship since the government started tampering with their salaries.

Motunrayo said teachers were not happy with the payment of half salaries and it had resulted in sicknesses to many, adding that many who borrowed from commercial banks for years could not pay the debt and had resulted in compound interests.

“Most teachers are sick with no money to treat themselves,” she said.  “Teachers that are not happy, how will they get to school and teach?”

She noted that the majority of the teachers vent their frustrations on the students. “In a situation where a teacher supposed to take four subjects a day since there is no strength to teach, just two will be taken,” Motunrayo said.

She added that the situation has caused most parents to withdraw their children from public schools to private ones.

Evidence shows that delay in payment of salaries contributes to lack of motivation. Most teachers lack the motivation for teaching which has created an adverse effect on the teaching and learning in the country.

The President of NUT, Muhammed Idris, in a news conference to mark 2018 World Teachers Day in Abuja, said: “The right to education will be vain, vague, a mirage and elusive, without the presence of an optimum number of qualified, well-remunerated and motivated teachers in the nations’ schools.”

He added that “young graduates of education discipline and prospective teachers have ignored teaching profession because of the kind of salary teachers were receiving.”

The Permanent Secretary, Federal Ministry of Education, Sonny Echono, in his comment, noted that one key factor in ensuring quality teaching and learning was the availability of adequate welfare for teachers to attract the best brains for the profession.