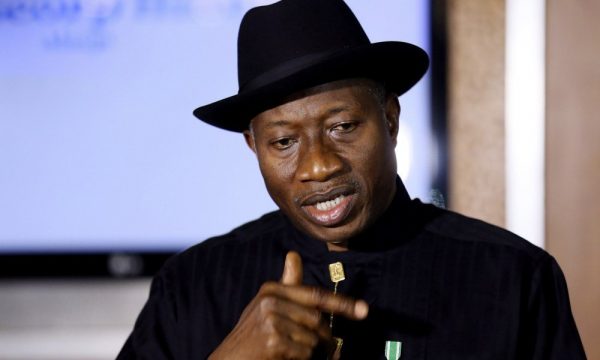 Jonathan stated this on Monday afternoon in response to an apology by Aminu Shagari, the late President’s son.

The former President who described his experience as an act allowed by God said he took no offense.

While stating he has no enemy to fight, he charged Shagari to emulate the detribalised nature of his late father.

“Dear Honourable Aminu Shagari, thank you for your apology. However, I never took offence,” Jonathan said in a post on his Facebook page.

“My firm belief is that I am a pencil in the Hand of God. Therefore, I have no enemies to fight, because of my confidence that people can only do to me what God permits.”

“I urge you to continue to emulate the humility of your father, the late President Shehu Shagari, a most detribalised Nigerian. May God bless you.”

Aminu Shagari, had in an interview with The Punch expressed his regret for the role he played in the 2015 general elections that led to the eventual defeat of Jonathan while seeking reelection as Nigerian president.

Shagari, who was enraged by the lack of commitment that President Muhammadu Buhari has displayed towards a promise he made to immortalize his late father whom Buhari overthrew in a coup in 1983 asked for forgiveness from Jonathan because he helped to bring down his government.

He said what he and others thought about the former president’s stewardship was not entirely true.

“Let me use this opportunity to tender a public apology to former President Jonathan and seek forgiveness because I helped to divide the Peoples Democratic Party and bring down his government, but, I have found out that what we thought about his stewardship was not entirely true,” Shagari’s son said.

“I expect President Buhari to also ask for forgiveness having found out that most of the things he accused my dad’s and President Jonathan’s administrations of were not true.”

Speaking further, Shagari said he was disappointed at Buhari’s administration, noting that what Nigeria needed to overcome the crisis of insecurity was bold leadership.

He slammed Buhari who according to him has refused to listen to the voice of reasonings in handling the insecurity prevalent in the country.

“I believe if we get it right in this aspect of our national life, our story would turn from bad to good within a short time. With emphasis, all we require is a credible and sincere leadership that will maximise our God-given talents and resources,” He said.

“A lot of us committed so much to bring this administration on board. As an individual, I assumed that, if nothing else, we would get the issue of security right, and every other thing would follow.”

Aminu Shagari lamented that “our security situation has degenerated from bad to worse and the President has refused to listen to every voice of reasoning. “

He said rather, the President has turned a deaf ear to what people were saying and insisted on keeping the Service Chiefs.

“Just recently, the government slammed the entire citizenry with a double post-COVID-19 assault – fuel price hike and increase in electricity tariff, without considering the income of Nigerians.

“With the minimum wage, in the face of the depreciating value of the naira, how do you expect an average Nigerian worker to survive, meet their family’s financial needs, and be happy?,” he said.