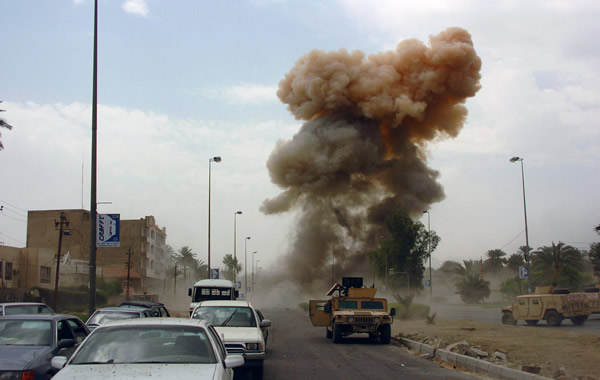 Four bombs exploded near Baghdad’s heavily fortified “Green Zone” and a busy square in the centre of the capital on Wednesday, killing at least 13 people, security sources said.

The blasts came a day after two rockets were fired into the Green Zone, home to the prime minister’s office and Western embassies, heightening concerns about Iraq’s ability to protect strategic sites as security deteriorates.

The interior ministry said in a statement that the attack was carried out by a suicide bomber who blew himself up as he was being searched.

The other car was driven by a suicide bomber who blew himself and the vehicle up outside a restaurant, close to a checkpoint one street away from the Green Zone, killing four people, the security sources said.

Another explosion near Khullani Square in central Baghdad left four others dead.

No group immediately claimed responsibility for the attacks, but Sunni Islamist militants have been regaining ground in Iraq, particularly in Anbar province, where they overran two cities on January 1.

Anambra To Get Two New Ministries