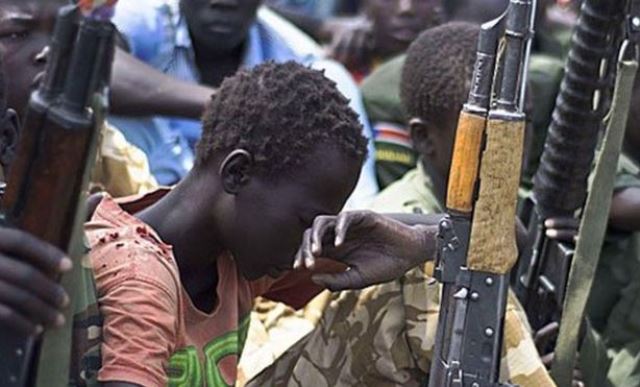 The United Nations’ Children’s Fund, UNICEF, has announced that a total of 145 child soldiers, who were fighting for two rebel groups in South Sudan have been released.

The children were recruited by the Cobra Faction and the SPLA In Opposition, two armed groups which have been fighting the government.

In a statement, UNICEF said the children were freed in the eastern region of Pibor and “disarmed and provided with civilian clothes,” adding, however, that about 16,000 more children still belong to various armed groups.

UNICEF said it was the largest release of child fighters since last year but warned that children were still being recruited by various armed groups.

Mahimbo Mdoe, Unicef’s representative in South Sudan called on all parties in the conflict to “end the recruitment and to release children who are currently serving in their ranks”.

One of the child soldiers, an 11-year old whose name was given only as Silva, said that he has been fighting for more than two years.

“I haven’t seen my mother and father since last summer,” he said, “I’ve seen many people killed when I was on missions.”

“I had an AK-47. It was heavy. I was fighting to protect my family and village. Now I want to go to school and learn. I don’t want to fight anymore, I was scared,” he said.

The two camps have broken a series of peace deals, the latest one in July, meant to resolve the crisis in the country.

Hundreds of civilians have been killed and thousands forced from their homes in the latest fighting.