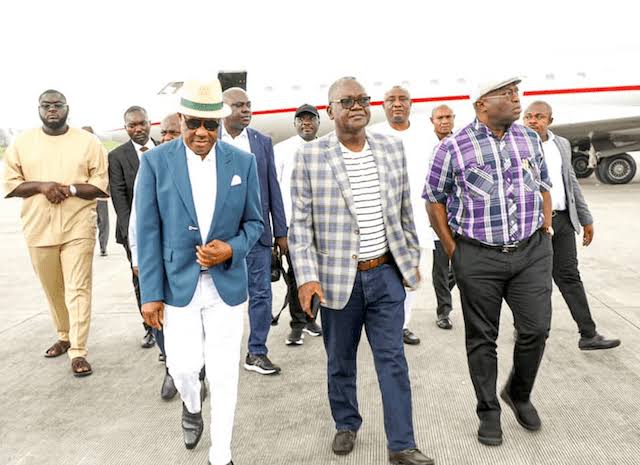 THE Nigerian Academy of International Affairs (NAIA), a body of retired professionals and scholars in diplomacy and international affairs, has frowned at politicians holding meetings over the 2023 general elections in foreign countries.

In a statement issued on Monday, NAIA President Bolaji Akinyemi said it was unfortunate that some Nigerian leaders had to abandon the shores of the country and hold meetings in London and Paris, capital cities of former colonial powers.

“It is revolting and unacceptable that some Nigerian leaders should fly out of the country in search of the magic wand to solve the country’s problems,” the statement said.

The ex-diplomats issued the statement after the three major presidential candidates in the 2023 general elections met separately with governor of Rivers State, Nyesom Wike, in London to discuss matters of political interest.

The candidates who held meetings with Wike in London are Bola Tinubu of the All Progressives Congress (APC), Atiku Abubakar of the Peoples Democratic Party (PDP) and Peter Obi of the Labour Party (LP).

The ex-diplomats described the meetings as ill-advised and jamboree of shame.

“The ill-advised and unwitting jamboree of shame displayed by these leading Nigerian politicians in London/Paris has demonstrated that the Nigerian environment created and polluted by them is not conducive to their vainglorious self-importance and unearned esteem.

“Consequently, and because of their neo-colonial mentality, which blinded them from seeing and appreciating the goodwill and resilience of Nigerians, they preferred savoury western atmosphere.

“The implication of which is the exposure of Nigeria directly or indirectly to unwarranted Western influence, particularly as they were perceived to be washing our dirty linens in the full glare of the world.”

The statement added that “it was ludicrous that deliberations were focused on dividing and allocating the national cake to themselves even before the cake is baked, as regards allocation of principal offices of the National Assembly, ministerial posts, Secretary to the Government of the Federation and others”.

The ex-diplomats said the politicians should rather devote sufficient time to finding solutions “to pervasive insecurity, economic recession and poverty in the land, problems which they caused or contributed substantially to their creation”.

The body reinstated its duty to call out Nigerian leaders when it deems their behaviour to be damaging to the international image of the country.

Chat us on WhatsApp
Advertisement
Previous articleINTERVIEW: If Buhari does not grant me firearms licence, I will do what is best for my people – Ortom
Next articlePolice rescue 12 hostages from kidnappers’ den in Zamfara