80% of Nigeria’s private universities only exist on paper – ASUU

MORE than 80 percent of private universities in Nigeria only exist on paper  and do not qualify to be classified as higher institutions, according to the Academic Staff Union of Universities (ASUU).

ASUU stated this in an exclusive interview with The ICIR, where it bemoaned the standards of teaching and learning in private universities.

Biodun Ogunyemi, president of the union, who spoke with The ICIR, said establishment of more private universities would continue to widen the divide between the rich and the poor in the country. He noted that children of the rich would always get admission into higher institutions, while those of the poor would remain at home.

Ogunyemi explained that granting approvals for more private universities would spell doom for public universities in the nation.

According to him, many of the private universities did not have manpower and facilities to run the programmes for which they were accredited by the NUC, which was why they always engaged human and non-human resources in public universities, thus ‘overstretching’ the public schools.

“To that extent, they are overstretching facilities and academic human resources in the existing universities. So, if you like, you can call them parasites.  You know, those private universities are usually established by people with great influence and they present beautiful papers and beautiful proposals, but when it comes to the actualisation of their proposals, they fall flat.

He added  that in countries where private universities thrived, there were opportunities for students to access scholarships, to get support from government and from philanthropists.

In his view, Oba Abdulkadir L’aaro, a senior lecturer at the Department of Mass Communication, University of Ilorin, said private universities would continue to increase because of diversity of people in the country.

He explained that issuance of licences for that purpose was a process that had begun and might never stop.

Proprietors of such schools had “seen the merrier side of it, they want to make profit out of it,” he noted.

He pointed out that some established the institutions to pursue some interests such as community or religion.

“What is important is that we should keep our eyes on standards because the fear is that when public come into something that should ordinarily be for public good, the tendency is to bastardise the system. You can see what has happened to private primary and secondary schools. Now, we have more private schools around the neighbourhood and everybody is using all forms of gimmicks to continue to make profit out of it,” he said.

He charged NUC not to let down the guard, which he said was important in terms of personnel, material equipment and infrastructures.

He opined that in terms of regulation, the regulatory agency should ensure that private universities ran only programmes they had the resources to offer, as according to him, even public universities would not run all programmes at a go.

He said that had been the concern of ASUU over the years and standards in public universities should not be lowered in their private counterparts.

According to him, over three-quarters of students qualified to secure admission into tertiary institutions in the nation were denied access because of inadequate space.

Read Also: Inside suspension of Emirates, Air Peace  flights from Nigeria to Dubai

He also said the commission would continue to issue licences to as many persons as possible who met the conditions set by the NUC to set up private universities.

“If there is federal character, we would have stopped giving them. The north was not ready for a long time, but it is just waking up. That will not hinder the progress of other states of this country that are ready. If applicants from Ogun come today and satisfy our conditions, we will give them.”

The ICIR findings have shown that South-West has 37 out of 99 private universities in Nigeria (37 percent) while North-East, North-West and North-Central regions have 30 altogether (30 percent).

The ICIR findings further show that none of the privately-owned schools is in Bayelsa, Sokoto, Kebbi, Gombe, Zamfara, Borno, Yobe and Bauchi states.

Eight of the universities are located in Osun State. There are seven in each of Kwara and Oyo, as Lagos State and the Federal Capital Territory host six of the schools.

While four apiece are in Kano and Enugu, Edo and Delta have five each.

Imo, Anambra, Abia, Rivers, Akwa-Ibom and Ondo have three each, while two of the universities are located in each of Kaduna, Plateau, Nasarawa and Cross River.

Further analysis of the schools per geo-political zone shows that there are eight of the universities in the North-West; North-Central region has 20; South-East has 14; and South-South parades 18. 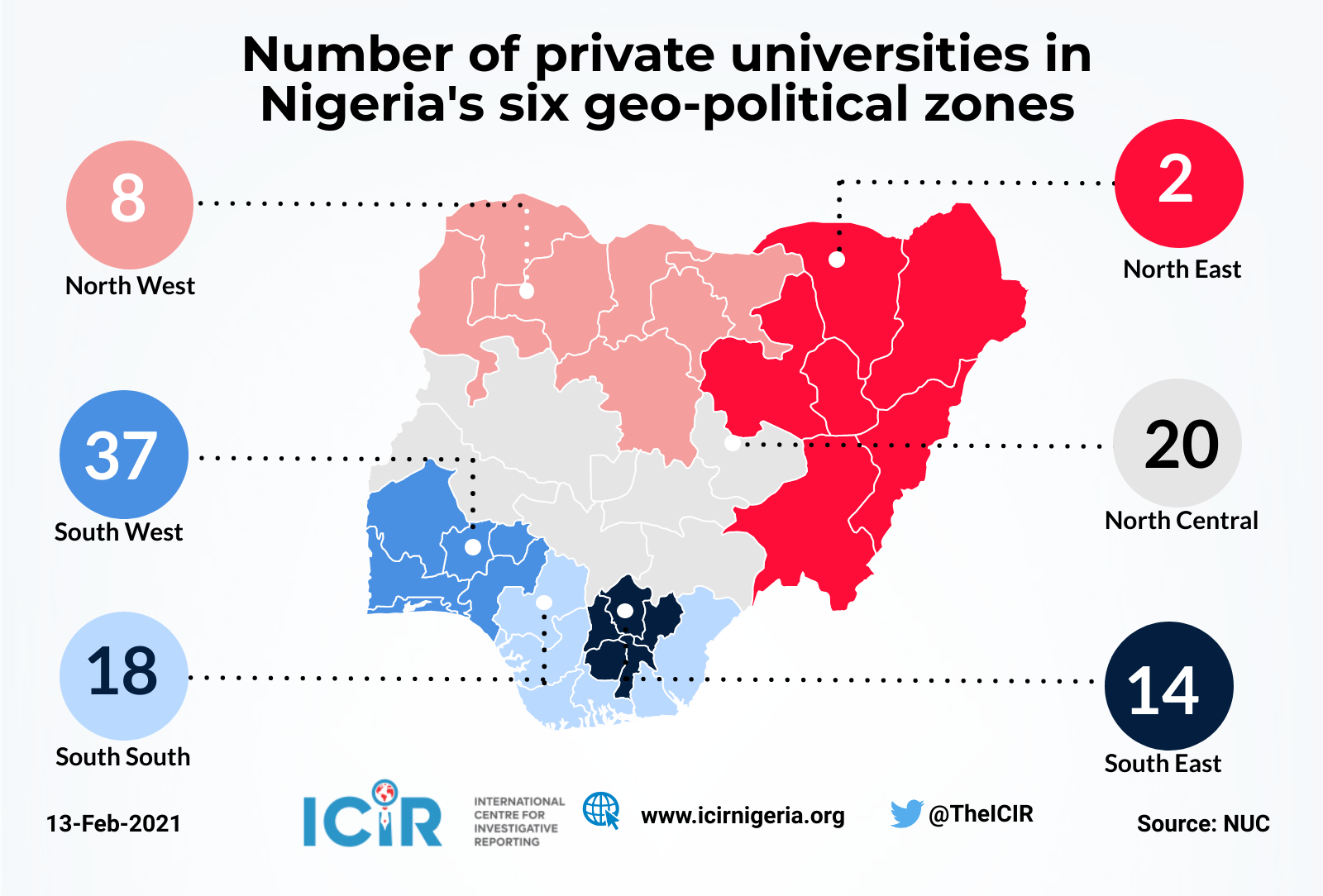 The ICIR also found that South-West has more private universities than both South-East and South-South. The two regions have 32 in total (32 percent).

Nigeria’s 36 states are grouped into six geo-political zones, with each zone having six adjoining states, except the South-East and North-West with five and seven respectively.

The country’s North-East has witnessed horrendous attacks from insurgents in the last decade, resulting in death and displacements of millions of people. The terrorists’ activities have also left in their trail, colossal destruction of infrastructures and low local and foreign investments.

Madonna University, Elele, Rivers State; Babcock University, Ilisan Remo; and Igbinedion University, Okada, Edo State were the first three private universities to be approved by government in Nigeria. They were approved on April 20, 1999, while they got their licences from NUC on May 10, same year.

The South-West region of the country then went on to dominate other regions in the number of the schools located in them, years later. As of 2014, the region accommodated 44 percent of all private universities in the country, but the percentage has shrunk to 37, with the approval of additional 20 private universities by the federal government, through the Federal Executive Council on February 3, 2021. Unlike the past, the South-West got only one of the schools.

The schools will run with NUC’s provisional license for three years, during which the commission would monitor and evaluate them.

The schools are already listed on the NUC’s website, even as they wait to receive their licences from the regulatory body.

At the time FEC made the approval for the new schools, Nigeria had 44 federal, 48 state-run and 79 private universities, making a total of 191 universities in the nation.

The president approved 2 billion naira for the school’s take-off. The fund, he said, should be procured through the Tertiary Education Trust Fund (TETFUND), according to a post on verified Twitter page of Bashir Ahmed, personal assistant to the president on new media.

Meanwhile, certain Nigerians believe that many students and graduates from the nation’s universities are intellectually deficient, despite increasing access for people to acquire knowledge at the tertiary level of education in the country.

Most recent among them is Adamu Adamu, current minister of education. In December 2020, while commissioning some educational projects in Yola, Adamawa State, the minister had accused many students and graduates in the country of lacking the competence to read and write well.

GUNMEN have reportedly attacked a church under the Bishop of the Catholic Diocese of...
Advertisement

Chat us on WhatsApp
Advertisement
Previous articleINTERVIEW: It is my dream to see more Nigerians in UK Parliament– Patience Bentu
Next articleTrump acquitted in second impeachment trial