Again, three Nigerians charged with unemployment wire fraud in US 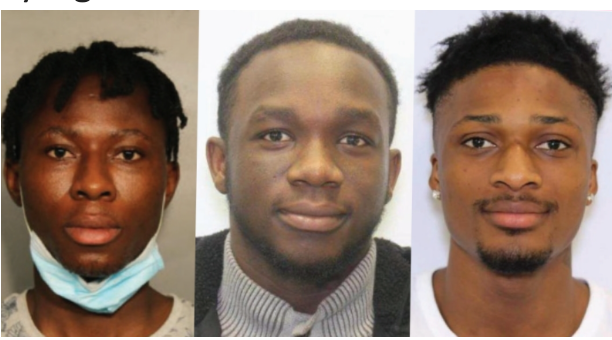 IN what now appears to be a syndicate of Nigerian unemployment fraudsters, the Federal Bureau of Investigations (FBI), in collaboration with other law enforcement agencies in the United States, have arrested three Nigerian nationals for allegedly stealing over $2.6 million in bogus unemployment insurance claims.

The suspects, identified as Quazeem Owolabi Adeyinka, Ayodeji Jonathan Sangode and Olamide Yusuf Bakare, were picked up last week at the end of a covert investigation through the help of ATM cameras, according to court documents filed by U.S. Department of Labour Special Agent John Collins, which was seen by The ICIR.

The suspects were said to have used an address located at 3217 75th Avenue in Hyattsville, Maryland, to defraud the state of California of over $1.2 million, with an attempted loss of more than $2.6 million.

“The investigation then learned that the SUBJECTS vacated the 75th Avenue Apartment on or around October 31, 2020, and at least one subject relocated to 3420 Toledo Terrace, Apt. 230, Hyattsville, Maryland (the “Toledo Terrace Apartment”), where UI fraud is suspected to have continued, this time against the state of Maryland,” the charge sheet read.

Unemployment Insurance (UI) is a state-federal programme that provides monetary benefits to eligible lawful workers. Although state workforce agencies (SWAs) administer their respective UI programmes, they must do so in accordance with federal laws and regulations.

Generally, UI weekly benefit amounts are based on a percentage of earnings over a base period and the payments are intended to provide temporary financial assistance to lawful workers who are unemployed through no fault of their own.

Each state sets its own additional requirements for eligibility, benefit amounts, and length of time benefits can be paid.

Based on California Employment Development Department (EDD) records, over 200 individual UI applications were filed with claimants’ address at the 75th Avenue Apartment, and approximately 97 of the UI claims were approved by the EDD and funded with a total of about $1.2million in UI benefits.

“Based on the size of the apartment, the investigation has concluded that a high number of UI applications associated with this address is unreasonable, and thus an indicator of fraudulent activity,” the court document said.

After EDD accepts a UI claim, it transmits information via electronic wire to Bank of America (BofA). When receiving regular UI benefits, claimants must complete a Continued Claim Form (DE 4581) and certify every two weeks, under penalty of perjury, that they remain unemployed and eligible to receive UI benefits. The EDD authorises and deposits payment to the EBP debit card after it receives the Continued Claim Form.

Records from state workforce agencies obtained by the DOL-OIG show that the 75th Avenue Apartment was also used to file for UI claims in the states of Hawaii, Louisiana, Massachusetts, Mississippi, Texas, Washington, and West Virginia.

On April 14, another Nigerian Charles Onus was arrested in San Francisco for his alleged participation in a scheme that stole nearly $1 million by hacking into a payroll processing company’s system to access user accounts and divert payroll to his prepaid debit cards.

In May, a former aide to Governor Dapo Abiodun of Ogun State Abidemi Rufai was arrested for about $900, 000 unemployment scam and by June, prosecutors filled additional fraud charges against him, just as another Nigerian Chukwuemeka Onyegbula of the Pan Ocean Oil Corporation Nigeria Limited and Damilola Adepoju were also indicted for wire fraud and identity theft charges.