THE Akwa Ibom state government has said that the fraud, inflation of contracts and extra – budgetary expenses spotted in its Accountant General’s annual report and audited statements of the state for 2019 were caused by “coding errors”.

An extensive investigation which lasted for two months, which was published on Tuesday, revealed that offices of the governor and Secretary to State Government, SSG, incurred unbudgeted expenses in excess of N10 billion on the maintenance of the State aircraft, purchase of cars, fuel and lubricants, governor’s hospitality.

The Governor’s Office and Secretary to the State Government, Emmanuel Ekuwem, refused to respond to Freedom of Information Requests sent to them during the investigation to clarify things.
However, in reaction to the publication of our report, the government held a press conference on Wednesday addressed by the Commissioner for Economic Development and Ibom Deep Seaport, Akan Okon; Commissioner for Finance, Nsikan Nkan; Commissioner for Information and Strategy, Ini Ememobong and the Accountant General, Uwem Andrew-Essien, where it said that the extra budgetary expenses pointed out in the report were as a result of coding errors in the International Public Sector Accounting Standards (IPSAS Accrual) software used by the Accountant General’s office.

He emphasised that the IPSAS template is new to the state.

“As you are all aware, our account is prepared under IPSAS and this is a new system. It is very cumbersome. Even printers are having challenges. In the process of printing our 2019 budget (Accountant General Report) there was a coding error. This was promptly discovered by the office of the Accountant General and a memo was issued retrieving that Account that was in error. And the correct one, properly coded.”

“You need to read this side-by-side with the state budget 2019 and you’ll come to the conclusion that there was no extra-budgetary expenditure by the government and that all expenditures were in line with the budget and some of them here, the amount spent was not up to the budgeted amount,” Okon said.

However, Okon’s claim is untrue as the Akwa Ibom state government adopted the International Public Sector Accounting Standards template in preparation and reporting of her financial accounts since 2014 under the Chief Godswill Akpabio administration.

Besides, the source who made the Auditor General’s report available to our reporter in the first instance, a senior official of the government, confirmed that the original document was what was submitted to the Akwa Ibom State House of Assembly.

The government distributed what it called the “authentic” Audited General’s report to journalists at the press conference but a close look at it showed that it had been doctored. The new report also threw up new discrepancies and questions.

In fact, the new report calls to question the government’s claim that its officials still do not know how to handle the software as it showed that hundreds of them were trained. 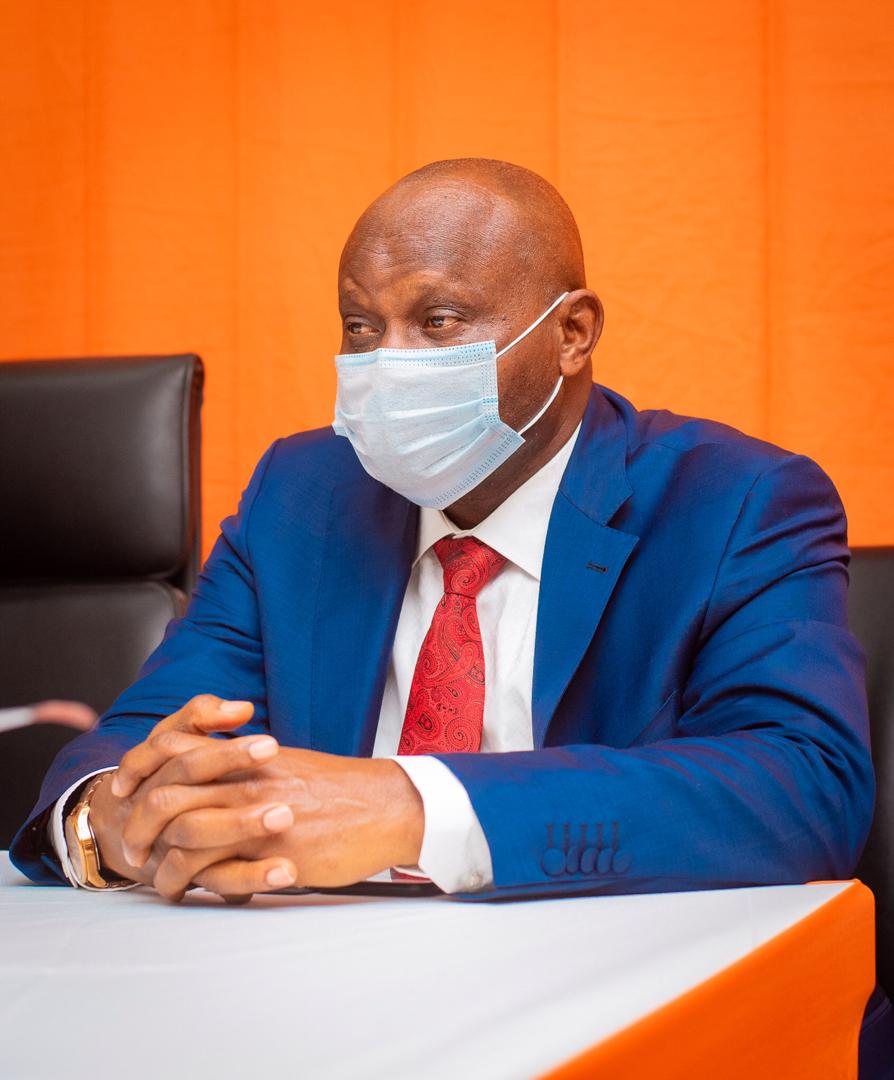 The Commissioner for Finance, Nsikan Nkan, like his Economic Development colleague, said the extra-budgetary expenditures noted in the first annual report was a result of coding error.

“In Akwa Ibom State, we want to assure you that the governor we have is a man of integrity. God who judges and knows the heart knows that he as a human being has tried everything possible to ensure that resources of this State are properly accounted for as it is being managed. I want Akwa Ibom people to be rest assured that their resources are in good hands and they are managed properly.

“Errors like these happen, we didn’t know that this will happen. The Accountant General and the finance sector had taken steps to correct this. If we had known that it is going to happen, maybe we would have even called this press conference”, the Finance Commissioner said on Wednesday.

The remark by the Finance Commissioner at the press conference contradicts his earlier submission when our reporters contacted him.

Nkan had defended the over -expenditures, saying that the State Executive Council has the powers to carry out virement.

He had argued that they “leveraged on margin of increased cost” provided in the budget office to spend more monies than what were approved on aircraft maintenance, cars, fuel and lubricants, security, welfare for pilgrims, government special projects, governor’s hospitality, among others.

The Commissioner had said “virement process in budgeting allows the Executive to move items from a subhead that is under-utilised to another that needs attention…it is not always easy to anticipate everything that will be needed to be done immediately. So, provisions must be made for unforeseen circumstances or events.”

As at Wednesday when these reporters discussed the issues of the extra budgetary expenses spotted in the first report with Nkan, neither he nor a Director in the Ministry of Economic Development and Ibom Deep Seaport, who contributed in explaining the powers of the executive to vire money from one budget item to the other, said anything about a coding error or withdrawal of the document. Both of them based their defence on the copy of the report these reporters showed to them.

Despite denial by the Secretary of the Akwa Ibom State Pilgrims Welfare Board, Nsikak-Abasi Nnam-Okuo Orok, that the Board did not spend money on production of “security encoded ID card” for intending pilgrims in 2019, the new “authentic” report still posted an expenditure of N9 million on this budget item.

Orok had told our reporter on Monday that the Board did not apply for money for the item.

“I am surprised! I am just hearing that for the first time. For you to say that there was an approval, I’m even surprise. We never even applied for the production of any ID. They wouldn’t have even given us approval of N120 million for an item that had N9 million approved for it in the budget. And, how will you apply for something that was N9 million and the Governor will give you N120 million? I think something is wrong somewhere.”

Initially, N120 million was posted as expenditure for the production of security encoded ID cards for intending pilgrims in the annual report and audited statement which the state government claimed it had retrieved through a treasury circular on September 2.

In our earlier report, a staff of the Board and some of the persons who were sponsored by the state government to pilgrimage in 2019, said that ID cards were not produced for any of the Pilgrims.

In the new report, the state government claimed that it spent N1.022 billion on pilgrims activities in 2019; this is almost the total N1.55 billion net amount Osun State received in March 2019 from the Federation Account Allocation Committee.  Our earlier investigation indicated that 123 people from the state went on pilgrimage that year; three out of this number were self-sponsored.

The new report indicates that the state government spent 100 per cent of the approved amount for all the items that our earlier report pointed to as having extra-budgetary expenses on them.

For instance, N1.3 billion was budgeted for fuel and lubricants, N800 million for governor’s hospitality and traditional gifts, N3.6 billion for government special projects, N738 million on 15 units of Prado Jeeps, and N2.5 billion on maintenance and repairs of the state aircraft and the government now claims to have spent exactly how much was budgeted.
The report also shows that N1.57 billion was spent on the celebration of democracy day, state anniversary, disability day, independence day, children’s and widows day in 2019.

A non-governmental organisation working on fiscal governance in the South-South, Nigeria, has urged the state government to address the “main issues” raised in the investigative story on the multi-billion Naira scandal.

Policy Alert in a statement in Uyo described as “uncharitable and unsatisfactory” the response from the Akwa Ibom State government on recent allegations of extra-budgetary and spurious expenditures.

In the statement signed by its Communications and Stakeholder Engagement Officer, Utibe Archibong, the organization said “over the last three weeks, Policy Alert has, in its traditional manner, and true to it’s mandate, been engaged in analysis on the 2021 budget proposals for states in the Niger Delta, including Akwa Ibom. In doing this, we made comparisons between current proposals and actual spending for recent years.”

“For Akwa Ibom State, this meant we had to rely on the Report of the Accountant General of the State for 2019, which is the most recently available. We also did extensive public mobilisation, sensitisation and even made a presentation to the Akwa Ibom State House of Assembly based on the same report.”

“It was therefore startling to us for government to claim that the version of the report that civil society groups and the media relied on for their engagement was ‘spurious’ and ‘erroneous’ and that the said report had been earlier recalled.

Government even went further to label citizens and the media as mischievous for performing what is just their civic  responsibility.”

She added: “We find the attitude of the state government on this matter rather uncharitable. Granted that we have to accept the so-called “authentic” report and its corrections on the matter of extra-budgetary expenditure, the response of government stills falls far short of addressing the many other issues raised in the said publications, especially those bordering on misplaced priorities and questionable spending.”

“We applaud the growing consciousness on the budget among Akwa Ibom people and reiterate our commitment to continue to simplify fiscal data and make them accessible to every citizen.

“We urge oversight institutions in the state, such as the Office of the Auditor General and the House of Assembly to step up to the plate by addressing these flagged issues, so that the next fiscal year can take off on a healthy note”, the statement added.

The state government officials did not address the contention on the award of contract for the maintenance and repairs of the state aircraft, a Bombardier Global 5000. Our investigations revealed that CAMOSA Projects Limited engaged by the Udom Emmanuel administration for the maintenance and repairs of the state aircraft since it came onboard only registered officially with the Corporate Affairs Commission in December 2019.
Checks with the Akwa Ibom State Internal Revenue Service indicate that CAMOSA Projects Limited was not on the database of companies paying taxes to the State despite drawing N2.5 billion from the State coffers in 2019 alone, according to the new ‘authentic’ report.

Meanwhile, Ememobong, has said that the government will continue engage the public on issues arising from the contentious report.