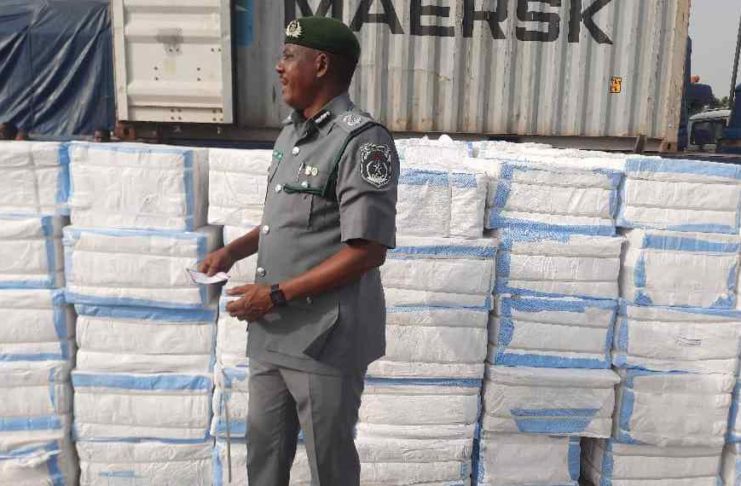 Amid rising drug issues in Nigeria, the Nigerian Customs Service (NCS), Seme Command, has intercepted a massive consignment from the Republic of Benin officers. The items suspected to be tramadol capsules valued at N1.4bn were concealed with packaged jumbo size adult diapers in a 40-feet container

Abdullahi quoted the Customs Area Controller, Bello Jibo, saying the container was handed over to the Command on November 15 by the Republic of Benin Authorities under transit to Nigeria.

According to the statement, neither the owner nor any other person has shown up since the customs took delivery of the container.

“On the December 20, Seme Customs Service invited other security agencies and stakeholders to witness the examination of the said container,”

“The items discovered during 100 per cent examination are 200 packages of adult diapers, 100 cartons of Gabadol 120mg suspected to be Tramadol equivalent to 360kg. The diapers were smartly arranged at the front of the container while the drugs were at the back.

“I directed that samples be taken out officially and handed over to National Agency for Food Drug Administration and Control (NAFDAC) to ascertain and confirm the drugs.” The Controller said in the statement.

Jibo said the command had commenced full investigation to fish out those involved in the unlawful importation.

According to a report by the United Nations Office On Drugs And Crime (UNODC) Titled Drug Use Nigeria 2018, the high rate of drug use is prevalent in Nigeria and West Africa. This illicit trade is mainly at the borders.

The first-ever National Drug Use Survey conducted by UNODC in conjunction with the National Bureau of Statistics in 2018 stated that the International Narcotics Control Board (INCB) notes that West Africa remains a key transit point for drug trafficking. Other than cannabis and cocaine, seizure data indicate trafficking in precursors like ephedrine in Nigeria and synthetic opioid Tramadol, which is not under international control but is increasingly being misused in Nigeria and the broader West African region.

“The current report reveals that 14.4 per cent of the population aged 15-64 years in Nigeria (14.3 million people) have used drugs in the past 12 months. Cannabis was the most widely used substance in Nigeria, followed by prescription opioids (such as Tramadol, codeine, or morphine) and cough syrups containing codeine or dextromethorphan.

“High-risk drug users38 were estimated to account for 0.4 per cent of the population (approximately 376,000 people), and almost all were regularly using opioids, predominantly pharmaceutical opioids such as Tramadol, codeine or morphine. Among the high-risk drug.” The report stated.

The survey revealed an average drug use preponderance of more than 14%, which is alarmingly high compared with the global majority of 5.5%.

This is not the first time drugs, especially Tramadol, will be intercepted in Nigeria; the National Drug Law Enforcement Agency, NDLEA, intercepted a container load of Tramadol at the Apapa seaport in Lagos in February 2021.

A total of 614.396 kilograms of various hard drugs were seized during the incident.

Chat us on WhatsApp
Advertisement
Previous articleNigeria, two others are strongholds for cryptocurrency- Analyst
Next articleCattle forces farmers out of farmlands, as hunger looms in Nigeria’s Benue Valley (Part two)