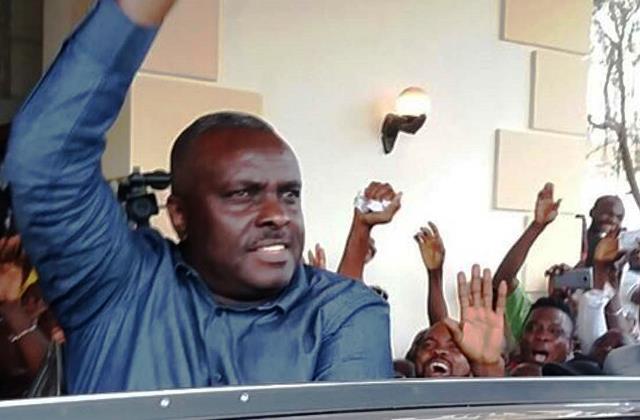 The Chairman of Independent Corrupt Practices and Other Related Offences, ICPC, has said that he was upset by the celebration and rousy welcome accorded the former governor of Delta State, James Ibori who returned to Nigeria after serving jail term in United Kingdom over corruption saying “I feel very upset”.

Nta, while answering questions during a media parley held in Abuja on Monday said such celebrations has repercussions within Nigeria and internationally.

It would be recalled that there was wild jubilation in Delta State and especially in Oghara, the hometown of Ibori,  after a British court ordered his immediate release, having served five and a half years of his 13-year prison sentence.

On getting news of his release, hundreds of indigenes of Oghara, his home town trooped out en mass singing solidarity songs and marching along the major streets of the town.

The order for Ibori’s release came despite attempts by the British Home Secretary to detain him in prison, pending the ruling on a prolonged asset forfeiture case brought against him by the British government.

“It is a whole range of feelings and people who do this celebration should ask why, how. I was at the Summit in Uyo last two weeks and we harped on on your (media) ability to empower young Nigerians to be able to understand their role in the society and be self sufficient.

“If you go to somebody’s house and eat there all he time , is it easy for you to abuse the person? We have to look at the total mindset. Those celebrations have repercussions within Nigeria and internationally. I hope you know that. And it is not how the Chairman alone feels, I feel very upset. How do you feel?”

He however charged the media to help re-orient society towards positive values by paying due attention to corruption prevention efforts by giving publicity to enforcement issues.

“In our anti-corruption work, we acknowledge the media as a potent force in shaping opinion and behaviour. Since positive values constitute the fundamentals of a corrupt free society, we ask that you leverage your influence to re-orient society towards these values by paying due attention to corruption prevention efforts even as publicity is given to these enforcement issues.”