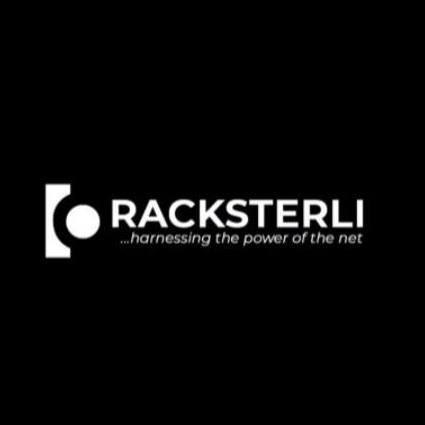 NIGERIANS involved in an online affiliate marketing platform known as Racksterli have continued to express fear and doubts over the legality and genuineness of the business venture.

Many are concerned about the possibility of getting their returns on investments (ROI)  and their capital, following the decision of the chief executive officer Michael Oti to liquidate the company.

“…Even though we have glitches, nothing must happen to your capital. In order to do that (return the money), in addition to the available raw capital, we might need to start selling out some of our properties, or we start liquidating our properties to raise more funds to add to the funds we have. But we are not going to wait for that. We will start with the available funds,” he said in a viral video.

In another video found on one of the communication channels of the platform, Oti disclosed that he had stopped further registration of new investors. Described as an honourable decision, he said it was to maintain a good reputation and offset outstanding ROI.

“We were faced with an option to either continue functioning, keep some people to pay the price, but if we had continued, it would have simply been at some peoples’ expense. So we decided to take the tougher decision, which is to honourably stop registrations,” he stated in another 13: 31-second video.

On March 28, the organisation claimed it had commenced repayment, but few individuals who made comments on the post still expressed their disappointments, while others commended him for addressing the subscribers.

On March 4, it became a trending issue on social media. Chris Ani, @iamchrisani was among those who shared worries about the scheme, describing it as a ‘full branded scam and Ponzi.’

In his opinion, Nigerians involved in the venture should have learned from similar mouth-watery Ponzi schemes which crashed in recent years. This was after some Nigerians had invested a huge sum in the schemes. The MMM is such a good instance.

“Hi, racksterli, I ought to withdraw last week Thursday, but my dashboard is showing me a different date,”  a former student of Joseph Sarwuan Tarka University, Makurdi, Ochaizy Ochai said, expressing his concerns on the platform’s social media account.

Another subscriber, identified as Michael, a Lagosian, said he was yet to collect his money.

Khaled, who lives at Ifako-Ijaiye, also in Lagos State, was displeased he could not access the investment platform.

“Hello, I have tried everything, but it’s not working. There was a time I successfully submitted my details but when I tried to log in, it says invalid details. I must have tried over 30 times now,” Khaled stated. Other concerned subscribers were Mercy John, Edochie Princewill, Peter Oghenero, Okunola Abbey.

Checks by The ICIR showed the last posts by Racksterli through the Racksfamilyofficial were on March 23, at about 1:18 pm. The posts were to respond to scores of concerns. “Kindly note that we would no longer be attending to complaints via any of our social media platforms rather than sending your complaints to the emails below related to your issues: racksothercomplaints@gmail.com, rackspaymentissues@gmail.com, and racksprofileissues@gmail.com.”

As such, the business platform has no known address or office.

Racksterly has since shut down, after which Racksterli came on board. They are clearly synonymous in pattern, and identity, except for the ‘i’, which replaces the ‘y’ in the earlier crashed scheme.

“Racksterly before now was doing the same thing and a whole lot of people also invested in it, but it crashed and packed people’s money away,” Victor Udochukwu posted on his social media.

“Racksterly crashed months ago and now this is a new racksterli.”

By March 8, the apprehension grew to its peak as some of the subscribers realised they could no longer access the firm’s web portal , denying them access to track their investments.

As of March 12, when The ICIR examined the websites, the web portal was still not active. There was confusion about whether the portal was still maintaining its original domain extension – .com or switched to .org.

On March 27, the reporter checked www.racksterli.org ,but rather than display service information of the purported investment company, a full blank website popped up with a simple tiny inscription, stating – welcome to me.

The ICIR also realised it was being promoted by David Adeleke, a notable Nigerian musician known as Davido. The promotional footage of Racksterli uploaded since last year December has garnered almost 4, 000 views as of date. This is despite using an invalid official website promoted in the 32-second video. 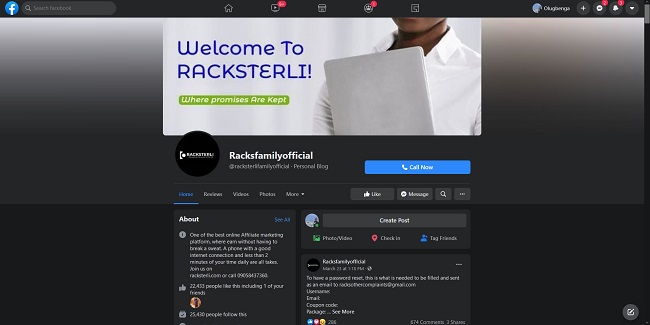 For the Standard package, subscribers are encouraged to invest N14, 000 and they could earn about N722 daily, while ROI for the platform was pegged at N21,600 in 30 days. This is more than 154 percent profit in a month.

Ruby and Emerald attract some of the highest ROI after an investment offer of N560,000 and N1.12 million respectively.

Other top packages include Pearl, Jasper, Sapphire, and Topaz. Investment for the Topaz package is N20 million. The company claimed that what was expected of subscribers was to share sponsored posts daily on their personal Facebook accounts through the Racksterli platform.

Forex trading, though largely done by governments, institutions, and currency speculators, it involves trading in international currencies such as the euro, dollar, and these are also based on speculations – high risks.

According to US-based online trading academy, “when you go long on EUR/USD, for example, you are hoping that the value of the Euro will increase relative to the U.S. Dollar. As with any investment, you could guess wrong, and the trade could move against you. That’s the most obvious risk when trading the FX markets.”

The Central Bank of Nigeria (CBN) has often expressed concerns on forex-related issues, especially purchases made through black markets.  It has also warned against several Ponzi schemes.

Besides, the Securities and Exchange Commission (SEC) has also been at the forefront of urging Nigerians to guard against investments such as Racksterli. For instance, in 2019, a Ponzi scheme identified as Loom Money Nigeria emerged. It deployed similar social media technologies to amplify the venture, but SEC kicked against it due to its volatility.

At least four of the suspicious investment platforms were shut down by the commission in 2019, some of which included Money Rite, X-World, No Failure Development, and MGB Global.

By April 2020, 11 extra similar Ponzi schemes were discovered, with severe warnings from the commission to Nigerians on the need to be mindful of fraudulent investments.

However, despite the possibility of real estate producing high ROI, the sector has not performed well in recent times. In fact, for six consecutive quarters before the fourth quarter (Q4) of 2020, the sector returned negative growth, showing that it was not growing.

The real estate sector returned to positive growth in Q4 of 2020, reporting 2.81 percent y/y  growth, according to the National Bureau of Statistics (NBS)

Scheme transits from racksterli to goldomc.com

By March 13, Racksterli had switched to www.goldomc.com with 442,058 users. But findings revealed that as of March 27, the number of users on the website, which also displayed the name of the scheme – Racksterli- had reduced to 395, 019.

The ICIR attempted to contact Racksterli on official mobile lines on its website and social media accounts, but it was unsuccessful. Text message sent to the line was also not replied to.

An economist Muda Yusuf has warned against the business and was particular about the loss Nigerians could experience, citing instances of past Ponzi schemes.

Yusuf, who is also the director-general of Lagos Chamber of Commerce and Industry (LCCI), recalled how SEC issued several warnings against similar business outfits. Because SEC plays an oversight role on investments, he advised Nigerians to steer clear of any investment venture unrecognised by the commission.

“It is the individual’s responsibility to do due diligence before investing. You may need to seek advice from financial market experts before investing your money in any venture. It is these financial experts that will determine if an investment is realistic or not,” Yusuf advised.

“Any company that is not registered by SEC can easily be fraudulent.”

A lawyer who shared his opinion on the issue Solomon Okedara said it would be inappropriate to literarily label the organisation as fraudulent. According to him, “on the face of it, it may look fraudulent, but it is an institution of government such as police or any other government authority that can investigate and say it is a fraudulent organisation.”

“There are businesses that run offices, yet they are fraudulent. But the very nature of their operations can be questioned by the people before investing in their activities. Do they have the expertise, structure and staff ?” he queried.

However, a business analyst Chidiebere Obasi noted that Nigerians must be wary of businesses that gave very high returns.

“Currently, returns in the economy are  very low, starting with fixed income to other markets. So, it is impossible for a company to promise you 50-100 percent ROI and keep it,” he said.

“Economic fundamentals do not support that. Let’s be careful and not fall victims. Always consult a financial expert if you are confused about an investment or want to invest.”

Head of corporate communications at SEC Efe Ebelo was contacted through a text message for reaction, but she did not respond to both the text message and calls put to her line.