Factcheck
By Olugbenga ADANIKIN On Aug 30, 2020

In one of the series of tweets, Moghalu, a former Presidential Candidate, on the platform of Young Progressive Party (YPP) in the country’s 2019 general election wrote: “90 million Nigerians live in extreme poverty and the country is essentially bankrupt not because we don’t have brilliant economists, but because our politics and leadership are a grand fraud. Prosperity requires nationhood, first, followed by strong, effective institutions”.

90 million Nigerians live in extreme poverty and the country is essentially bankrupt not because we don’t have brilliant economists, but because our politics and leadership are a grand fraud. Prosperity requires nationhood, first, followed by strong, effective institutions.

The United Nations defines Extreme poverty, also known as Absolute or Abject poverty as, “a condition characterised by severe deprivation of basic human needs, including food, safe drinking water, sanitation facilities, health, shelter, education, and information. It depends not only on income but also on access to services.” This description is contained in chapter two, item 19, page 38 of the  World Summit for Social Development WSSD 1995 agreement, held in Copenhagen.

A 2016 World Bank report done in collaboration with the United Nations Children Fund (UNICEF) titled ‘Ending Extreme Poverty: a Focus on Children’ benchmark extreme poverty as those living on less than $1.90 per day.

Meanwhile, in 2018, the Brookings Institution, a Washington DC-based non-profit organisation had projected that Nigeria would surpass India’s 73 million citizens living in extreme poverty. As of then, extreme poverty in Nigeria, the institute noted was ‘growing by six people every minute.’

By June 2018, Nigeria became the poverty capital of the world with about 86.9 million people living in extreme poverty. 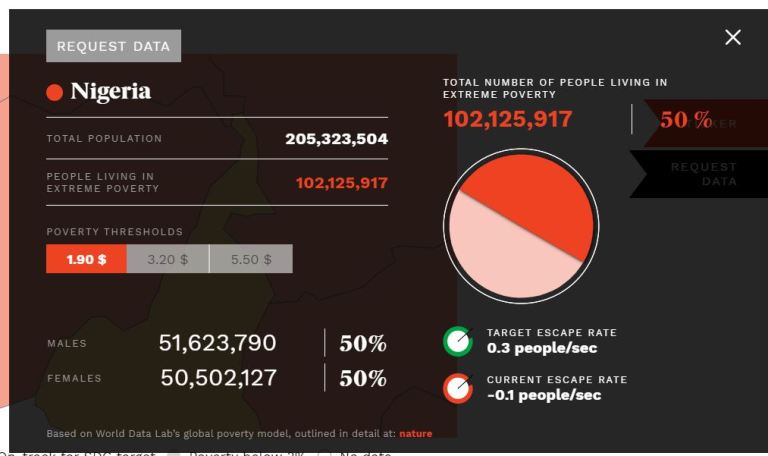 Checking Moghalu’s claim, the World Poverty Clock, – a web tool produced by World Data Lab – shows half  -50 percent- of Nigeria’s population are living in extreme poverty based on the $1.90 benchmark.

Worldometer, a reference website that provides counters and real-time statistics gives a slightly higher number at 206 million (206,139,589) as of August 30.

A look at the  World Bank ‘Poverty & Equity Data Portal’ poverty headcount ratio shows that Nigeria has a record of having half of its population living in extreme poverty. The portal shows that 53.5 percent of the population were living below the poverty line in 2003 and in 2009. It gives Nigeria’s population as 190.9 million and 195.9 million in 2017 and  2018 respectively.

This implies that the figure provided by Moghalu is lower than the current figure. 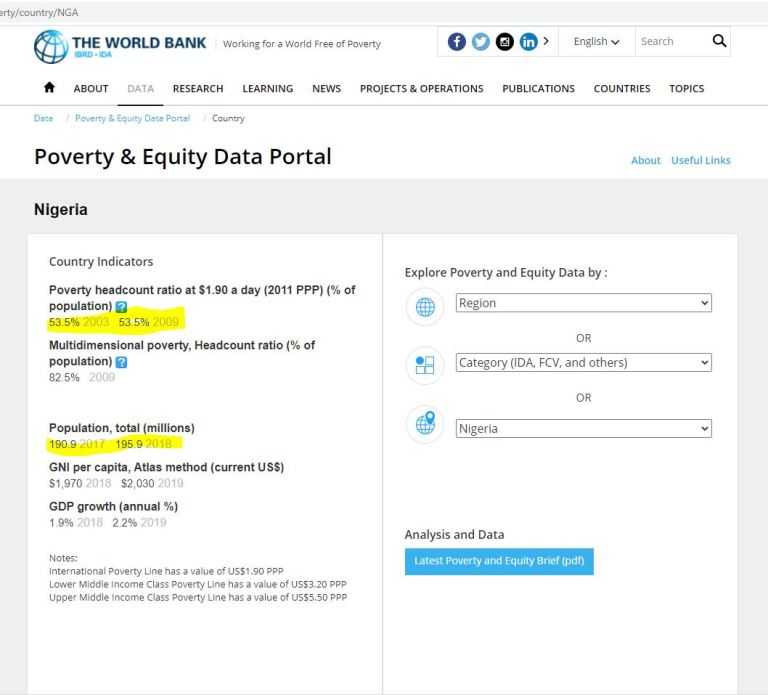