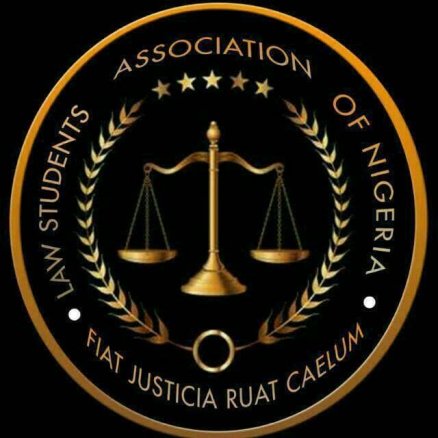 PRESIDENTS of the Law Students Association of Nigeria, LAWSAN have disclaimed the suit which national president, Blessing Agbomhere instituted at the Federal High Court, demanding N10 billion as compensation.

The association said they never sent him.

The disclaimer reads: “Our attention has been drawn to a suit instituted by one Blessing Agbomhere “for an on behalf of members of Law students association” yesterday 20th November 2020 at the Federal High court and a press briefing made by him shortly afterward where he claims to be representing all students in Nigeria.”

The association denied the claim, saying  Agbomhere has no authority to institute the action he did and has been rejected by most of their members.

“The blessing Agbomhere is not the president of Law Students’ association as he claims but an illegitimate usurper who continues to parade himself as president despite being rejected by an overwhelming number of law students across the country and therefore lack the authority and standing to institute an action of such nature,” the disclaimer reads.

The association, in their disclaimer, faulted Blessing for not notifying the members of the association before making the suit against ASUU, stating that there are other better ways to approach the matter before the conduct of a lawsuit, therefore, renders the suit frivolous.

“The suit in question, being a representative suit, requires the consent of the person or group of persons being represented and neither we, our members nor ‘Lawsanites’ were contacted, informed, or aware of the suit in question.

“There are better and more effective ways to approach the matter before considering litigation. Mr. Agbomhere apparently prefers this approach, which, albeit ineffective, generates greater attention, controversy, and fanfare.

“It is trite that the right to education as well as rights that fall under Chapter II of the Constitution of the Federal Republic of  Nigeria (as amended) are non-justiciable and therefore renders the suit frivolous. One needs not to have deep knowledge of Constitutional Law to know this,” the disclaimer contains.

The association, however, dissociates itself as well as all chapters and their members from the suit,  noting that Mr. Agbomhere singlehandedly took the step without consulting anyone. The members of the association, then, call on the general public and all Nigerian students to disregard the suit as yet another ploy by Abgomhere to gain cheap popularity in the country.

The disclaimer concludes: “We dissociate ourselves as well as all our chapters and members thereof from this impulsive and ill-thought step which Blessing Agbomhere singlehandedly took without consulting the student leaders of the various faculties of law, his NEC,  his senate or anyone with authority on the affairs of law students and students generally in Nigeria.

“Conclusively, we call on the public to disregard this as yet another ploy by Blessing Agbomhere to gain cheap popularity and political points as the typical politician he is.

LAWSAN President, Usmanu Danfodiyo University, UDUS chapter,  Muhammad Abubakar Tsamiya confirmed the disclaimer as a genuine one which representatives of 12 universities have endorsed

“The said National president, Blessing Agbomhere is not our president at all. He is just president to those whom he governs because we didn’t elect him. He keeps parading himself as the president despite his rejection from lots of law students across the country.