IN WHAT appeared to be one of the most contentious political race since Nigeria’s return to civil rule, a winner has emerged in the 2019 presidential election; he is Muhammadu Buhari, the candidate of the All Progressive Congress.

According to the results announced at the early hour of Wednesday by Mahmood Yakubu, the chairman of the Independent National Electoral Commission (INEC), Buhari, the incumbent president from 2015 to 2019, polled a total of 15,191,847 votes, which represents 56.94 per cent of the total vote against his closest challenger and former vice president, Atiku Abubakar of the People’s Democratic Party who scored 11,262, 978 (42.22 percent).

Buhari’s victory is registered in 19 states of the federation excluding the FCT, the seat of the Nigerian government, where he lost to Atiku by a margin of 107,773 votes. Buhari also lost FCT in 2015 with a difference of  10,796 votes. 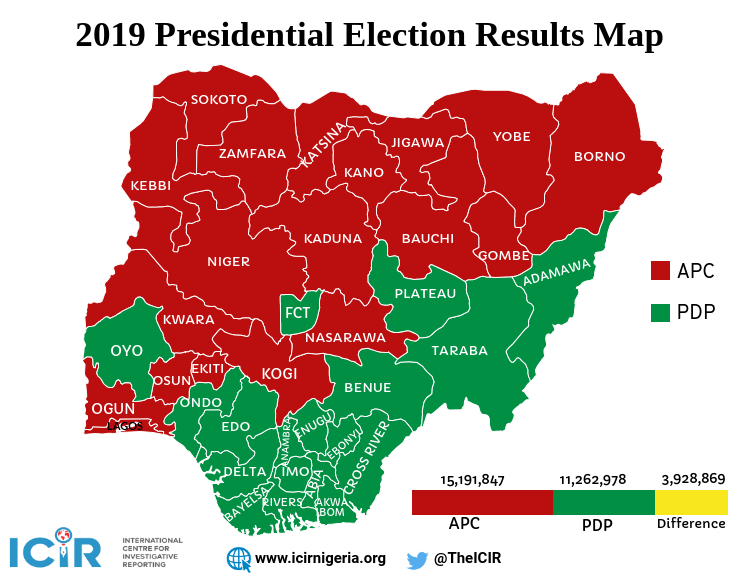 Others are Bauchi, Zamfara, Sokoto, Kebbi and Borno states.

The rest are Ondo, Oyo, Bayelsa, Benue, Plateau and Adamawa and Taraba states.

According to the Nigerian electoral law, the candidate with the highest votes is declared the winner in the first round, as long as he scores not less than one-quarter of votes cast at the election in each of at least two-thirds of all States in the Federation and the FCT, Abuja.

With this victory, Buhari becomes the second president to secure two-term in office since 1999. Former President Olusegun Obasanjo of PDP also won in 1999 and 2003.

President Musa Yar’Adua, who won the presidential election in 2007, died in power in 2010, therefore could not contest in 2011.

Ex-President Goodluck Jonathan, who eventually completed the botched term of Yar’ Adua, won 2011 with a total vote of 22,495 187 (58.9 per cent), while Buhari, then a candidate of Congress for Progressive Change scored  12,214,853, just  32 per cent of the total votes. But Jonathan was defeated in 2015, therefore foiling his chance to do the second term. 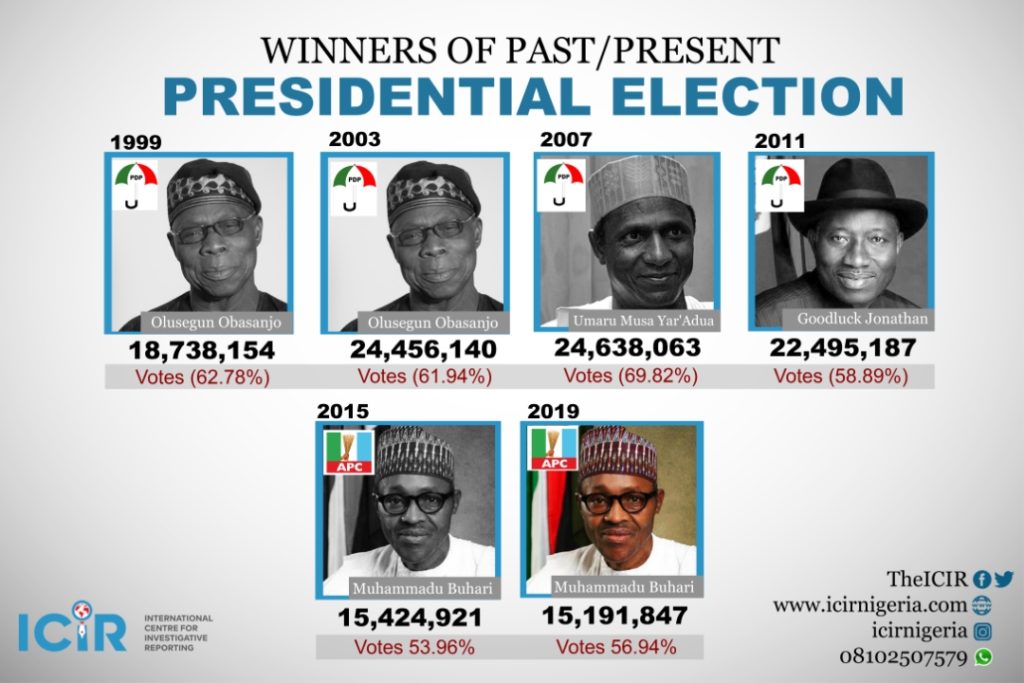 Meanwhile,  the PDP has rejected the result of the elections, and called on Nigerians to disregard the results until the INEC provides the data from the card reader accreditation at the polling units, and conduct fresh election in Borno, Yobe and Zamfara states.

In a letter signed by Deputy Director General of PDP Presidential Campaign Organization,  Tanimu Turaki, SAN, the party also called on INEC to restore its votes in Plateau, FCT, Kogi and Nasarawa states.

There are media reports of ballot box snatching in Lagos, Delta,  Anambra , and other states. Also, elections were cancelled or not held in several polling units in Akwa Ibom and Rivers.

The PDP vice presidential candidate, Peter Obi has called for a fresh poll in the South East, alleging malfunctioning of card readers among other irregularities.

Ajibola AMZAT
Comments
We need your support to produce excellent journalism at all times.