THE Nigerian military’s total spendings rose by 137 per cent between the four-year term of the former President Goodluck Jonathan and the first term of President Muhammadu Buhari.

According to the data obtained by The ICIR from the Office of the Accountant General of the Federation (OAGF). This implies that the military during the first four years of President Buhari received more allocation than the last four years of ex-President Jonathan with a difference of N109, 106,256,894. 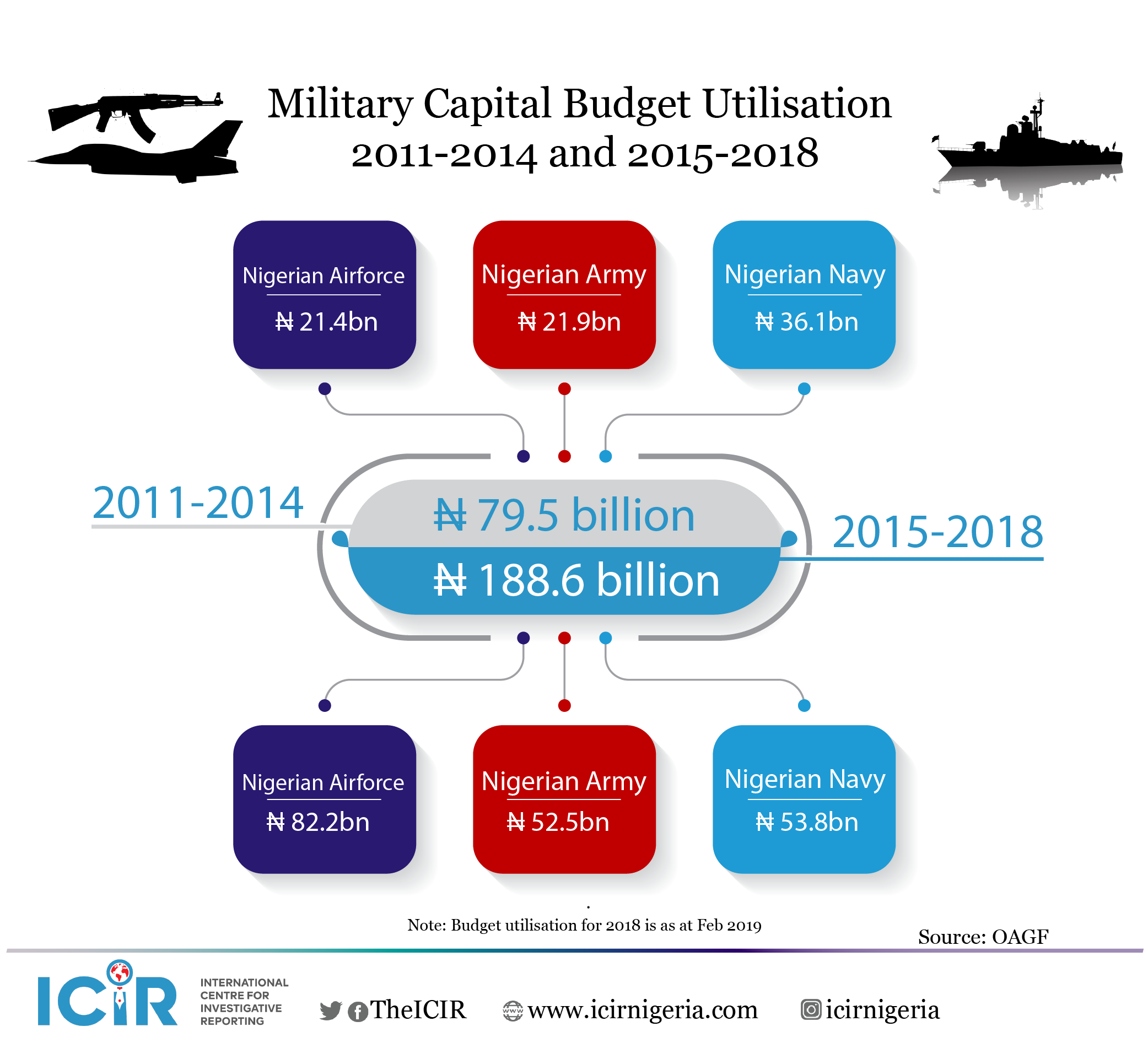 But, despite this rise in military spending during Buhari’s first tenure, the increased allocation has an inverse relationship with the level of security in the country.

Curiously, the data shows that the more the government spends on arms and ammunition, the more widespread are the incidents of restiveness across the nation. 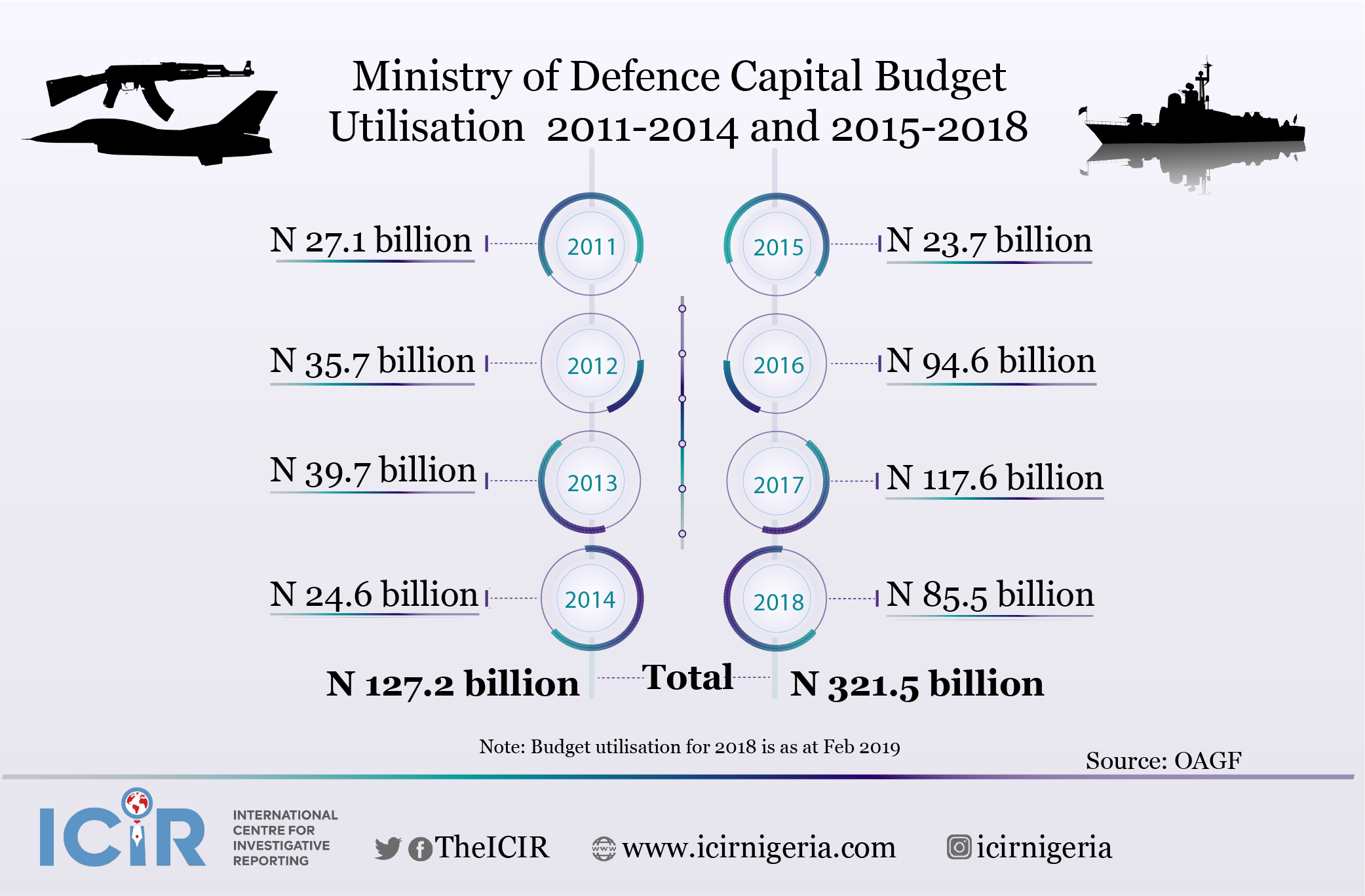 This breakdown shows that President Buhari spent far more on the military than his predecessor.

Despite the increased allocation to the Nigerian military, insecurity in the country steadily has been on the rise.

Nigerians are repeatedly worried on the visibly declining security situation, ranging from kidnappings to killings, aside from the contending Boko Haram insurgency.

More often than none, attacks occur in different parts of the country.  In Zamfara State, for instance, a BBC report, identified 262 civilian deaths in the first 100 days of the year.

Mid-last year, former Senator Sa’idu Dansadau made a claim that about 3,000 people were killed in Zamfara State, with 2, 076 farms destroyed within two years. The ICIR has not confirmed this.

On the night of 31st December 2018, Kashim Shettima, the former Borno State Governor held an extraordinary security meeting on what he perceived as worsening security situation in the state.

On 5th April, 50 people were reportedly killed as claimed by Sanusi Rikiji, Speaker of the Zamfara State House of Assembly, speaking during a condolence visit to Kaura Namoda Emirate.

Miss Faye Mooney, a British national was killed by bandits in Kaduna state, adding to several other gory incidents that have generated much public anxiety recently.

On 5th May, gunmen at the early hours of Sunday kidnapped Mrs Suzzy Nathan, Permanent Secretary of the Taraba State Ministry of Water Resources, from her home. The height of the situation was a declaration by the Daura Emirate of its resolve to suspend Sallah celebration in the President’s home town.

Worried over the insecurity situation, Abdulmumini Kabir, the Emir of Katsina, reiterated the need to proffer a lasting solution to the continuous killings and kidnappings.

“What are you to gain by killing, kidnapping people? It’s very unfortunate. I have not seen this kind of country; how do we live like animals? Three days ago Magajin Gari (of Daura emirate council) was abducted, nobody is safe now, whether in your house or road, wherever you are,” says the emir “What we want you to do for us is to stop the fight. Many people have deserted, abandoned their farms in fear of kidnapping and killings and other atrocities, it’s very unfortunate.”

Recently, the lawmakers summoned the President who was apparently away in London, to meet before it to explain reasons for the reoccurring insecurity.

This is coming less than a month member of the National Assembly (NASS) invited the president over the insecurity situations.

Despite this intervention, killing is yet to abate in several parts of the country. And these tragic occurrences have made it difficult for Buhari administration to justify the rising military spending.