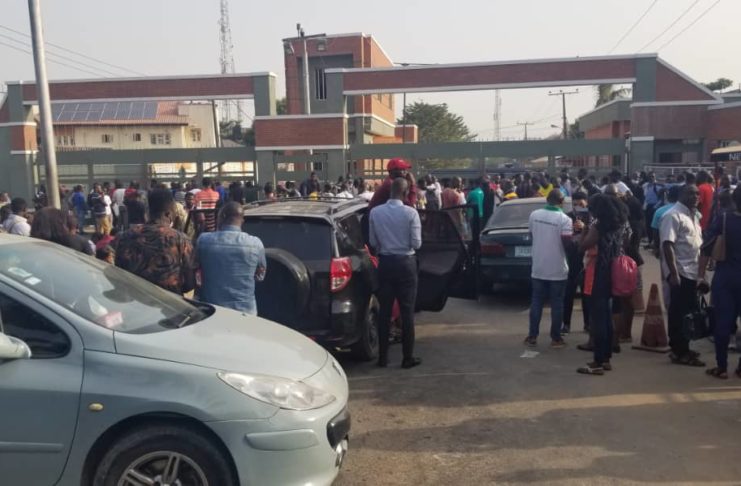 Our correspondent who visited  the estate at 5pm on Wednesday observed the presence of armed officials and the representatives of Lagos State government leaving the area.

The ICIR gathered that the Adeyiga family has been seeking to reclaim the entire community following a Supreme Court ruling in their favour of them.

An earlier report noted that the family had relied on an originating summon pursuant to Order 113 Rules 1 and 3 of the Rule of the Supreme Court in England to recover 549 plots of land in the Shangisha Village, Scheme II, in Ikosi-Ketu LCDA of Kosofe Local Government of Lagos.

According to the report, the apex court had, in its ruling, affirmed the judgements of the Lagos State High Court and the Court of Appeal, Lagos Division, which ordered the state government to immediately allocate 549 plots to the landlords under the Shangisha/Magodo Estate Scheme 2.

However, on Tuesday, the family moved into the estate, seeking to lay claim to it with the use of excessive force.

According to the Legal Adviser of the Magodo Residents Association Tunji Abdulhammed, policemen numbering 100 gained access into the estate. They also used a bulldozer in an attempt to demolish some properties. This act made the residents resist the family’s attempt, shut the gate by 2 am and stop any movement in or outside of the estate.

He said, “The genesis of the matter is that there is a claim by certain people, the Adeyiga family of Shangisha, laying claim to the ownership of this estate that they have a judgement in 1993 from the Supreme court which asked the government to give them certain plots of this estate. The government refused to allocate any plot to them because the judgement did not specifically state where and where the plot should be. When the government failed to give them the plots, they tried to enforce it and they obtained what we call writ of possession.

“We became aware of that, that was in 2015 and challenged that writ of possession in court and it was set aside. That particular set-aside order is being appealed against by the family. As I speak to you, the matter is at the court of appeal. The writ of possession which would give them the power to enforce any judgement here is still a subject of litigation at the court of appeal which matter will come up in February 2022.”

Going further, he added, “They were here to do an illegal job, unfortunately, they were aided by the Police, over 100 of them from Abuja, on the instruction of the Inspector General of the Police. They do not have any valid basis. They did not have any paper when they were asked. They were trying to force into the estate and attempted to bring a bulldozer into the estate. We rallied round ourselves at about 2 am yesterday and said nobody would go out or come in this morning.”

Abdulhammed explained that their travails were being sorted by the government, as he pointed to the vehicles leaving the compound. He, however, noted that they would revisit the matter of the Police constant harassment on its residents.

“We will still take legal steps against the Police because this is not the first time. It was done early this year. We were told the state government would release a statement in that regard. The matter is still a court matter. There is no judgement for anybody to enforce and even if they have judgement, the proper thing for them to do now that the land is occupied is to go to court against the individual to obtain an order against them. Whatever they do now is illegal, they cant chase anybody out,” he said.

The atmosphere of the estate was quiet as most people silently trooped out in the evening to move around. This was because bus drivers in the estate were off duty. Residents waited at the bus stop but they could not get any bus to convey them to their homes. Our correspondent chose to go deeper inspecting the business activities of the estate. Many shops were locked, though a few others were open. Other properties carried the inscription, “ID/795/88 possession taken today 21/12/21 by court order.”

A Point of Sale (POS) operator Adewunmi Oyetayo said the closure of the gate affected his patronage for today.

“There would have been better patronage if what happened this morning did not happen. People came around but not like what was happening. A few businesses closed for today and a few were afraid of coming out due to the crowd and it affected their business one way or the other,” he added.

Our correspondent observed that life slowly returned to the estate in the evening as more residents were making their way into the estate with some guards at the gate asserting their authority. As at press time, this reporter was still expecting the press statement that the Lagos State Government vowed to release on this matter.