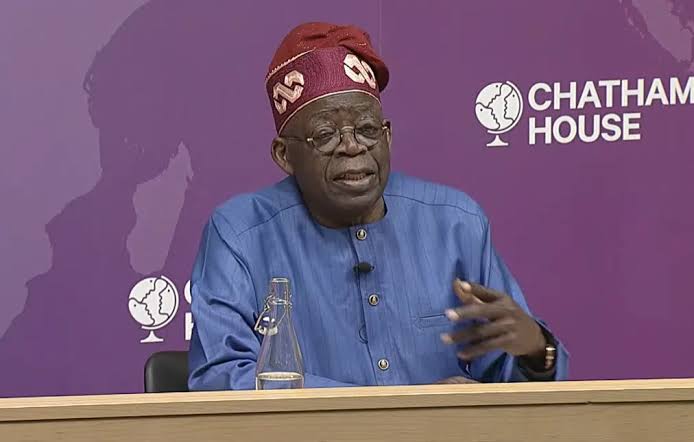 FORMER Governor of Lagos state and presidential flagbearer of the All Progressives Congress (APC) Bola Tinubu, on Monday, December 5, unveiled some of his strategies to fix the Nigerian economy and revive key sectors like defense, education and technology.

Tinubu, who spoke during an appearance at Chatham House in London, the United Kingdom, told his audience that he would prioritise education by providing student loans and reforming the Almajiri educational system practiced in Northern Nigeria.

READ ALSO:
Video does not show Reno Omokri campaigning in support of Tinubu at Chatham House

“There will be student loans. We are going to reform the Almajiri system. We’ll equally build more schools, recruit more teachers and train them,” Tinubu said.

He added that his government will also introduce technology hubs for youths to acquire digital skills. “Youths can even develop technological languages on their own and make a better 21st-century approach to governance in Nigeria,” Tinubu said.

However, during the Question and Answers (Q&A) session that followed his address, Tinubu delegated some of his allies to respond on his behalf.

Some of those who answered questions on Tinubu’s behalf include the Speaker of the House of Representatives, Femi Gbajabiamila; Kaduna State Governor, Nasir El-Rufai; former Ekiti State Governor, Kayode Fayemi; APC national women’s leader, Dr Betta Edu; former Commissioner for Finance in Lagos, Wale Edun; and the Director of Strategic Communication of the APC Presidential Campaign Council Dele Aleke, amongst others.

According to the former governor of Lagos State, he adopted the delegation method “to show the team and the capacity that we have”.

“The numbers must change and the Bola Tinubu administration already has a blueprint which is embedded in our action plan to address this. We will scale up the numbers of the armed forces. We’ll ramp up not only the numbers but the training and the equipment,” the Kaduna governor said.

Gbajabiamila also responded to a question on the strategies of Tinubu on defence, while the APC national women’s leader answered a question on healthcare delivery, amongst others.

Aleke, on his part, answered question on how Tinubu plans to lift Nigerians out of poverty if elected. “The key to his policy for increasing economic growth is to enable the private sector to make the investment that will increase productivity, grow the economy, create the jobs, and reduce poverty,” he said.