THE Economic and Financial Crimes Commission (EFCC) on Tuesday has dismissed pictures depicting cruel detention of humans allegedly belonging to the Commission in Port Harcourt, but the source insists that the images are true.

On Monday, a Twitter user identified as @TheRealDayne shared series of pictures attributed to the EFCC Port Harcourt facility, where individuals were inappropriately treated, due to lack of equipped detention cell.

The poster twitted, “I was made to know that this is an everyday thing, that zonal office in PH keeps this people here, under the rain and sun, Night and Day, they do not have internal detention centre, where they can keep them when the weather is unfavourable”.

Dismissing the information, the Acting, Head, Media and Publicity of the EFCC, Tony Orilade in a statement on Tuesday said the alleged pictures indicated as EFCC facility in Port Harcourt is fake.

“The attention of the Economic and Financial Crimes Commission, EFCC has been drawn to a trending tweet from showing pictures purported to be the EFCC Port Harcourt Zonal Office Holding Cell.

“The Commission hereby states that the tweet is not just the imagination of its author, but a mischief and a calculated attempt to smear the hard-earned reputation of the Commission,” EFCC said.

The commission said its facility in the Port Harcourt Zonal Office, has a high degree of decency and is not an open dumping facility, surrounded by “razor-wired walls”, as portrayed by the poster.

Such an act, according to the EFCC, was mischievous calculation by the pioneer of the ‘fake pictures’, adding that “EFCC detention centres are known for their remarkable care for detainees in line with our avowed respect for human rights and dignity”.

“The Commission can state without fear of contradiction that our Port Harcourt detention facility, like all others across the country, is further bolstered by a well-equipped medical centre that attends to the health needs of detainees.

“These detainees are further fed three square meals daily from the same canteen that service officers and men of the Commission.

“Were it not so, suspects standing trial for corruption would not prefer to be remanded in the custody of the Commission to those of the nation’s Correctional Centres. It is on record that no detainee has challenged the Commission for rights violation in court.

The statement noted that the information aimed at embarrassing the Commission would be investigated and culprit made to face the law.

However, when The ICIR reached out to the said poster who chose to be addressed as @TheRealDayne, the source insisted such facility was owned by the EFCC and was personally captured from a nearby building. 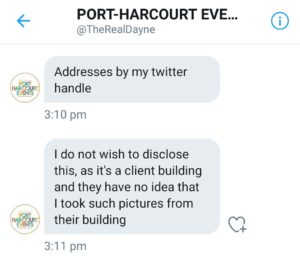 “Those pictures are true, and were captured by me, from a separate building,” the source said.

When The ICIR demanded a definite address of the said building where the pictures were captured from to help locate the said facility, the poster said: “I do not wish to disclose this, as it’s a client building and they have no idea that I took such pictures from their building”.