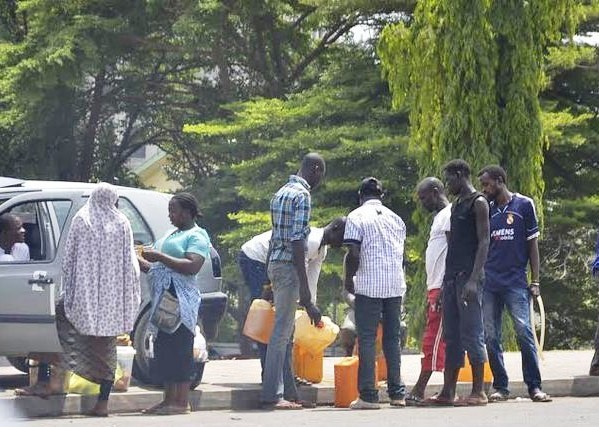 For the past two days, the police, working with men of the Nigeria Security and Civil Defence Corps, NSCDC, and the Abuja Environmental Protection Board, AEPB, on the one hand and illegal marketers of petroleum products have been engaged in a game of cat and mouse as the authorities make determined efforts to rid the streets of black market fuel sale

For a city currently battling with inadequate supply of the products, the move by the authorities has also thrown up its own fair share of outcry among the consumers, many of who rely on the supply by the illegal channels.

The Federal Capital Territory, FCT, Police command last week announced a clamp down on petroleum products black market operators and set up a task force to deal with them.

Our reporter went round the some parts of the city to assess the success of the clamp down and the reaction of motorists who are forced to resort to the black market because of unbearably long queues at fuel stations.

It was discovered that while the illegal fuel traders, made up of mostly unemployed youths, have left the major roads, their trade continues, virtually unhindered, on the side road not far from major fuel stations.

In traditional hotspots of the black marketers such as the Dikko Road, near the Force Headquarters, Area 11, the NNPC Mega filling state in Wuse Zone 1 and the Area 1 section of the city, the activities of the marketers are experiencing a noticeable downswing as they are virtually absent from their usual spots on major roads.

But on a closer look, the reporter observed that they had only moved their illicit trade off the major roads to adjourning side streets to continue their business away from the prying eyes of the security operatives.

Along the Dikko Road, about two vans with officials of the AEPB and the police could be seen casually surveying their quarry from a distance. 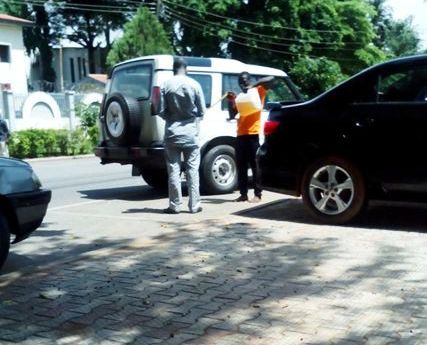 The black marketers were also seen holding forth in their new terrain. A few bold ones with hoses clutched in their hands approach the major road in order to persuade impatient motorists to patronize them instead of waiting in the queues in front of the Total Filling station in area 11.

A few motorists, after waiting endlessly on the queue, are finally persuaded to follow the young men into the side street where the deal on the purchase of black market fuel is quickly reached.

One of the marketers, a harried young man, who spoke with the reporter briefly, said they get their supplies from fuel attendants at nearby filling stations and resell in order to make a living.

“We dey buy one gallon, that is 10 litres, for N1300. We dey sell for N2000. We no dey gain too much. At times we dey pay more than that to get am,” he spoke briefly with the reporter before dashing after a motorist driving a posh car who was vigorously beckoning to him.

At the massive NNPC Mega filling station along Olusegun Obasanjo Way in Wuse Zone 1, which is another regular beehive of illegal fuel merchants, the marketers seem to have been driven completely off their turf.

One or two young men could however be seen clutching hoses which show that gallons of fuel may be around the corner available for sale for prospective customers.

But here, at least some sanity had returned to the filling station and adjourning roads which used to be blocked due to the activities of touts, hustlers, black marketers and police men who all jostled to make a quick dough form the scarcity of fuel.

Also, parts of Wuse 2 where the youths were regularly seen carrying out their illicit trade did not witness their usual large presence. 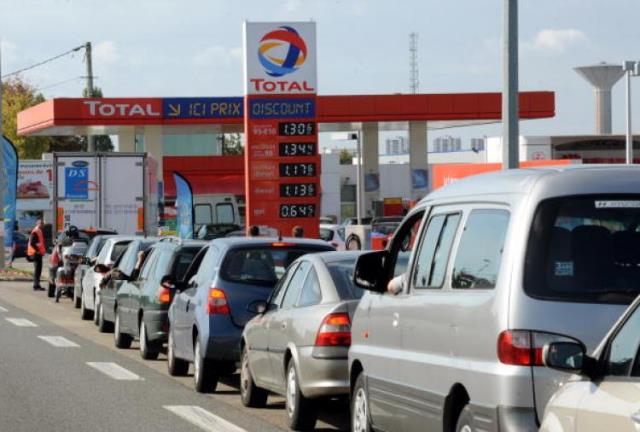 Ironically, large queues could be seen in front of most of the filling stations showing that the siege on the city is far from over.

A motorist, Ogala Linus, said the raid on black marketers would further heighten the plight of motorists who are presently suffering as a result of shortfall in fuel availability.

“These young men appear to be our only solution for now. I spent six hours trying to get fuel at a NNPC station yesterday. How long will I continue to do that? At least with a little more cash, you can always get your supply from the black marketers,’ he said irritably.

Another motorist, who did not give his name, said he cannot afford to queue endlessly at filling stations going by the intense nature of his work. He prefers instead to patronize black market operators.

“At least, you save time by doing that. But if you chase them off the roads, how do people like me survive?” he queried.

A civil servant, Okorie Martins, said that the marketers have devised new ways to evade arrests. He shares his experience:

‘If you go to Maitama as am speaking with you, behind the Raw Materials Research and Development Council building just along WAEC, you will find a sewage line where the black marketers now gather. You will not see them when you pass. You will only see long lines of empty gallons.”

“They are nearby waiting for customers. They send out their members to source for customers and bring these back to the sewage line to pick up the products. This is how bad the situation has degenerated,” he said.

A taxi driver who plies the Wuse 2 axis also informed the reporter of a new means through which the illegal marketers in conjunction with fuel attendants get their supplies.

He said most of them make use of Golf cars fitted with extra tanks to get their products from filling station attendants after bribing them.

He said the presence of such tanks is an open secret in most filling stations today.

their efforts,” he said.

It would be recalled that a few weeks ago, two cars with fitted equipment used to transport fuel sold via the black market were seized by the special task force set up by the FCT Police command to rid Abuja of the merchants.

Anjuguri Manzah, the FCT command police spokesperson in an interaction with our reporter said the suspects would soon be charged to court. He also said that the command was also on its toes in an effort to rid the city of the black market operators.

“It is an ongoing process. Our aim is to drive them off the streets as they are there illegally. We are winning the war, I can tell you. We will soon get rid of these merchants and make our streets decent once more. Those that have been arrested will of course be prosecuted to serve as a deterrent to others,” he said.

He also added that the task force would be in place until its efforts have yielded success.

“The work of the task force would not be deemed complete until they have yielded maximum success,” he noted.