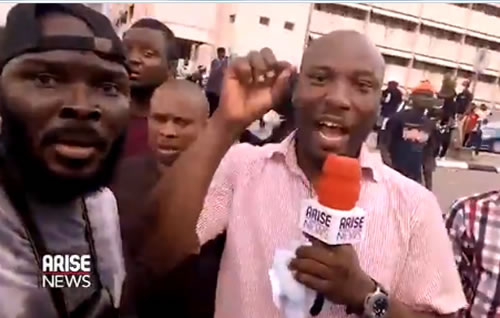 THE Nigerian Security Operatives in Abuja on Tuesday, during the EndSARS protest, assaulted and seize the camera belonging to the Arise news crew covering the protest.

The television station’s crew members were trying to get the reactions of protesters at the National Assembly, Abuja when they were attacked by the security operatives who are in Nigerian military uniform.

Ferdinand Duruoha, Arise News correspondent, was one of the assaulted crew members of the television station at the entrance of the National Assembly complex.

On Sunday, October 11, Policemen attacked and brutalised an Arise crew covering the IGP Mohammed Adamu’s dissolution of SARS. The cameraman Francis Ogbonna was hit several times on the head and his camera destroyed while while his correspondent, Ferdinand Duruoha was intimidated.

Policemen have attacked and brutalised an Arise crew covering the IGP Mohammed Adamu's dissolution of SARS.

The cameraman Francis Ogbonna was hit several times on the head and his camera destroyed… pic.twitter.com/Q6NztIdTJ4

A video seen by The ICIR shows how the security operatives were assaulting the protesting youths.

It would be recalled that Mohammed Adamu, Nigeria’s  Inspector General of Police (IGP) had announced the dissolution of the controversial and brutal Special Anti-Robbery Squad (SARS) unit of the Nigeria Police Force.

Meanwhile, protests by Nigerian youths across the nation are still ongoing as protesters insist that their demands have not been met.

The protesters had issued a five-point demand including justice for all victims of SARS brutality, an increase in Police salary, psychological assessment of operatives of the squad, the release of all arrested protesters, and setting up of an independent body to investigate alleged police brutality in the country.

However, the Arise TV news has announced that the camera has been released back to the crew.