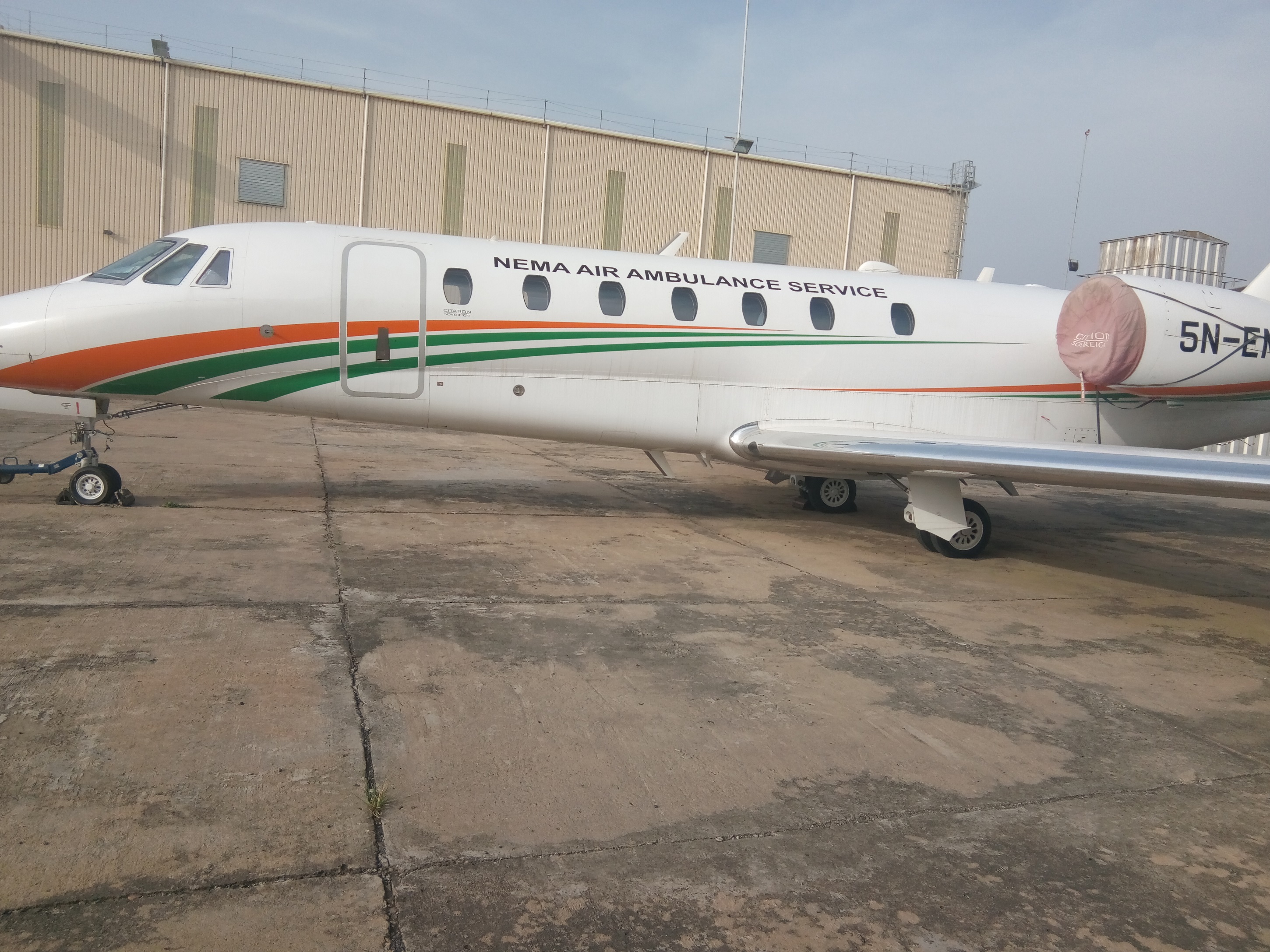 Nigeria’s readiness for air emergency is suspect — the air ambulance, and search and rescue (SAR) helicopter belonging to the National Emergency Management Agency (NEMA) are currently grounded, the ICIR can report.

The certificates of airworthiness and insurance for the two aircraft have expired, so they are parked at the hanger of Nigerian Police Air Wing of the Nnamdi Azikiwe International Airport, Abuja.

The NEMA Air Ambulance Service, a 12-passenger aircraft, is marked 5N−EMS, while the helicopter painted in orange colour is marked NEMA rescue with 5N−NEM as its registration number. Launched on February 13, 2015, the air ambulance is meant to deliver emergency healthcare and quick transportation of patients with emergency cases.

NEMA was established in 1999 to manage disasters in Nigeria, with a mission to “coordinate resource towards efficient and effective disaster prevention, preparation, mitigation and response in Nigeria”.

But the ICIR can authoritatively report that the agency is nowhere close to being prepared to prevent or respond to any disaster in any part of the country when the need arises. This is in spite of huge budgetary allocations to the agency in 2016 and 2017: N1.66 billion and N1.41 billion respectively.

NEVER BEEN USED BEFORE

The search-and-rescue helicopter – acquired in 2014 – has never been used for any rescue operation, yet its airworthiness certificate and insurance have expired, the ICIR gathered.

“The air ambulance has never been used before − except for a simulation exercise sometimes in 2015 when it was flown to the NEMA headquarters and the trauma center at the National Hospital. That is all; it has never been used to any rescue,” disclosed an official of the agency, who did not want to be named because he was not authorized to speak to the press.

When the late Alex Ekweume, former Vice President, needed to be flown abroad in November 2017, after suffering from chest infection, the Federal Government, put NEMA on standby to prepare the air ambulance to airlift him to London for medical treatment.

But the Second Republic Vice President was flown abroad in a chattered white air ambulance with Registration Number N605AJ because the NEMA air ambulance’s airworthiness and certificate of insurance expired.

Earlier in July 2017, elder statesman Maitama Sule also missed the opportunity of being airlifted by the NEMA air ambulance to Egypt for medical treatment − simply because the aircraft was grounded for the same reasons. He later died in an undisclosed hospital in Cairo, 24 hours after he was admitted.

GROUNDED FOR OVER A YEAR

A crew member of the air ambulance who also spoke anonymously because he could be sanctioned for talking to the press confirmed that the aircraft had been grounded for over a year over issues relating to “air worthiness and insurance renewal”.

He told the ICIR that the aircraft’s quarterly insurance certificates had expired, while they had also not been serviced or maintained over a period of time. According to him, it costs about N20 million and N17 million to renew the insurance for the air ambulance and the helicopter.

“If you don’t have insurance you cannot fly,” he said, adding, “they also need servicing or maintenance because they have not been put to use over long period of time.”

In accordance with Nigerian Civil Aviation Authority (NCAA) Standards and Procedures, aircraft must be serviceable and must undergo a periodic maintenance and test flight carried out before procedure of renewal of certificate of airworthiness can commence.

“They are due for annual maintenance, and if we leave them like that, they will become a waste. It might warrant us to drop the engine, call the manufacturers,” he said.

“We have to ship them out for total overhaul and what that means is that it will be like we are buying another one. If the insurance is paid today, the ambulance will just be moved out of the country for maintenance.”

On its official website, NEMA claims to have in place a helicopter for search and rescue.

“The helicopter is stationed in Abuja and manned by officers of the Nigerian Air Force. Necessary arrangements are being concluded to acquire additional helicopters which we hope that with time there would be one for each of the six geo-political zones,” reads information posted on February 16, 2014.

However, findings by the ICIR, reveal that the Mi−17 helicopter whose certificate of airworthiness and insurance also expired on February 11, 2011 and on December 31, 2010 respectively has since been given out to the Nigerian Air Force.

This was confirmed by a NEMA official who declined to be mentioned.

“Before the acquisition of the helicopter we are using now, we had one helicopter that was acquired much earlier. The popular helicopter you see on NEMA website is the old one, they called it Mi-17.

“It’s a military helicopter acquired from Ukraine or Russia; it was grounded for a long time; it was not put to use but that helicopter has been handed to the Nigerian Air Force because it is rugged and being used for military operation. The Air Force has changed the colour from that orange colour of NEMA and has painted it with the military camouflage colour.”

When contacted for comments, Sani Datti, spokesperson of NEMA, said he was not in a position to respond to questions relating to the Air Wing Operations of NEMA.

While stressing that a letter could have been written in respect of such questions to the NEMA headquarters by the ICIR, Datti said Mustapha Maihaja, Director General of NEMA, is in the best position to answer the question.

He, however, added that this journalist should attend the public hearing on NEMA by the House of Representatives on Thursday, April 19, 2018, where, according to him, answers to the questions would be provided.

“When you are doing such kind of investigation, you need to write to the agency or you come and meet the right person. Like this thing you are asking me, I can’t say anything because I don’t know anything,” he said.

NEMA under Maihaja has been enmeshed in different crises, including financial scam allegation against him, which the National Assembly is currently investigating.

INVESTIGATION: Imo ‘urban project’… grabbing land from the poor, giving to the rich

How media literacy and social media will end social unrest…