DADDY D.O, a Twitter user with the username @DOlusegun, on Monday posted a document at exactly 11:51 pm with the claim that a Federal High Court sitting in Port Harcourt has restrained Godwin Obaseki, the incumbent Edo state governor, from participating in the Peoples’ Democratic Party’s gubernatorial primaries in the state.

In the past 11 hours, his post has garnered over 300 retweets and 500 ‘likes’ respectively.

The ICIR investigation also showed that the post has garnered 1,012,832 views as the time of filing this report.

In the last 7 hours, more than 6 popular Nigerian newspapers including Sahara Reporters, Vanguard, TheNation, TheCable, DailyPost, amongst others, have also reported on Tuesday that Obaseki was restrained from contesting the party’s primary election. 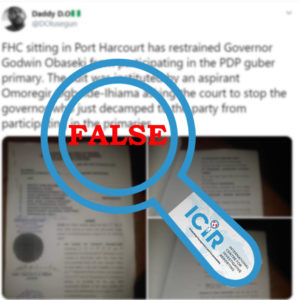 The ICIR examined the same reported document, with suit number FHC/PH/CS/69/2020, and discovered that the Federal High Court sitting in Port Harcourt, Rivers State, only ordered “accelerated hearing” of the suit seeking to stop Governor Obaseki from participating in the Edo PDP’s primary election slated for Thursday.

The suit in question was filed on Monday by Omoregie Ogbeide-Ihama, One of the PDP governorship aspirants in Edo State.  Prior to the court order, Ogbeide-Ihama has vowed not to step down for Obaseki after Gideon Ikhine, another aspirant, withdrew from the race.

On the first page of the document, the suit has Uche Secondus, National Chairman of the PDP, as the first defendant. Other defendants are Emmanuel Ogidi, Kingsley Chinda, Debekeme, James Manager, Ajibola Muraina, the PDP, Obaseki and the Independent National Electoral Commission (INEC) as second to ninth defendants respectively.

Ogbeide-Ihama, through his lawyers, Donald Denwigwe (SAN) and Chief F. Orbih, SAN, and leader of PDP in Edo State, had prayed the court to stop Obaseki because his defection to the party, a few days to the primary, was unreasonable and aimed at destabilising other aspirants.

The plaintiff also prayed the court to order the Independent National Electoral Commission, INEC, from recognising Obaseki as a candidate in the party’s primary.

According to TheNigeriaLawyer.com, the judge allowed the Plaintiff to serve the parties through substituted means in two national dailies and adjourned till June 24 for the hearing of the summon.

The judge ordered that the processes be served on Secondus, Ogidi, Chinda, Obaseki, and the PDP.

However, the court presided over by Justice E. A. Obile, after listening to the prayers of Denwigwe and Orbih, refused to grant the order stopping defendants, Obaseki or any member or non-member of the party other than those that have purchased forms and were screened within the time stated in the timetable from contesting for Thursday’s primary.

Lekan Bello, a legal practitioner, told The ICIR that the first paragraph of the order which is conspicuously missing in the pictures posted by the said Daddy D.O raises a serious doubt as to whether an order was granted restraining Governor Obaseki from participating in the party’s primaries.

He further explained that the first page in the pictures shows only the prayer of the plaintiff before the court and not the order of the court.

Also, The ICIR checks revealed that a page is missing in the document which caused sentence-break on the first page and the subsequent ones. The first page ends with “from further recognising and/ or” while the succeeding page starts with “2nd defendant, Emmanuel Ogidi.”

The court has, however, adjourned the case till Wednesday, 24th of June, to hear the motion on notice and did not restrain Obaseki from contesting under the party. The reports are FALSE.

Samad Uthman is a multimedia journalist with the International Center for Investigative Reporting. He tweets @sarmerdk2 and can be shot through [email protected]

10 key facts on African free trade which started on January…